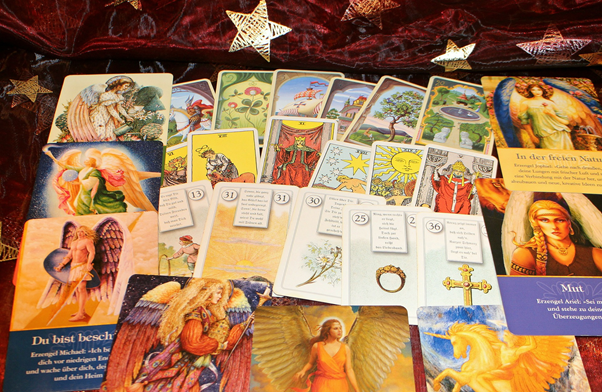 Beginners who learn about cards will find it difficult to choose among Tarot cards, Oracle cards, and Lenormand cards. They want to know which is better or why there are different types of cards. These decks are often sold together in stores, so it can be assumed that they are similar in some aspects in solving cards.

One thing to be emphasized is that no form of divination is better or worse than others. They are all printed on cards and similarly used (which are also shuffled and spread on a flat surface), but they follow two different interpretive styles. Each type of deck has a unique way of using and meaning.

The difference among the Tarot, Oracle and Lenormand can be summarized in two key factors: structure and purpose of use.

A traditional Tarot deck with a total of 78 cards, divided into Major Arcana and Minor Arcana. Major Arcana is 22 cards talk about awareness at a high level, numbered from 0 (the Fool) to 21 (the World). Those cards are often categorized by a Roman numeral and a title, such as XIV Temperance, XII the Hanged Man, and VIII Strength. They point to the main matters in our lives. The remaining 56 cards are called Minor Arcana which point to details in a spread. Minor Arcana has 4 suits (Cups, Wands, Pentacles, Swords). Each suit consists of 10 cards numbered from Ace to 10 and has 4 court cards (King, Queen, Knight, Page).

Oracle cards are less structured. The number of cards I have seen is at most 90 cards and at least 10 cards. The number of cards in a deck are probably at most 90 cards and at least 10 cards. The Oracle often follows a theme, such as Fairies, Cultural systems, Magic, Animals, Gods/Goddess or the process of self-improvement. The Oracle is somewhat more liberal and offers more creative sources for artisans that create decks because it is not limited to such a complex structure like Tarot cards.

The traditional Lenormand deck has 36 cards, based on the standard 52-card deck, in which card number 2, 3, 4, 5 in each set is discarded. So, the Lenormand also has 4 suits like the deck of playing cards: Clubs/Pentacles/Earth (Clubs); Hearts/Cups/Water (Hearts); Spades/Swords/Air (Spades); Diamonds/Wands/Fire (Diamonds). In addition, the cards are classified by the layers of meaning: good – neutral – bad. It is also possible to classify according to the nature of the Lenormand: the group indicates time, action, mood, personality.

2. How to read Tarot cards, Oracle cards, and Lenormand cards?

The Tarot deck has a symbolic language, so each image and detail on the card helps readers in recognizing, aggregating information and interpreting for querents. In contrast, the image on Lenormand cards is not very important, we just need to know the name of the card to understand its meaning. This meaning is the same even if you use different Lenormand decks. According to the modern point of view, some Lenormand researchers assumed that the image on the card also has a significant meaning, such as the view of the man or woman in the card will show us what they are interested in.

Another interesting point is that Tarot cards have upright and reversed meaning, depending on the direction of the card. For the Lenormand, we only read in one way. There is no reversed meaning in Lenormand.

Each card has its own meaning, it can be read independently or in a spread of cards, in which the meaning of each card will depend on the querent’s question. For example, in the famous Celtic Cross spread, each card’s position has a certain question, the meaning will change if we place the card at the 1st position to 2nd one. So, there are many ways to interpret the meaning of 78 Tarot cards.

Meanwhile, Lenormand spread will be read in pairs (2 cards together). In classic spreads including 3 cards/5 cards/9 cards or the Grand Tableau spread (using all 36 cards), the meaning of each card will not depend on its position. Lenormand’s art is in the combination of cards, this card will add meaning to the other card continuously until the end of the spread which forms multiple layers of meanings. Therefore, the more cards in the spread, the higher the complexity, and at the same time, its information is also more complete and detailed. There are many Lenormand reading methods, such as Diagonals, Mirroring, etc. You will get more information from the cards when combining multiple methods together.

In terms of reading Oracle cards, it is merely reading the accompanying guidebook and feeling the picture of the cards yourself. There are no specific instructions for all Oracle decks. They require less explanation and are easy to understand. The symbol system in the cards is less vague which sometimes makes it easier for readers to interpret. Each Oracle spread is different according to each deck that is guided in the accompanying book. Oracle decks will often come with detailed instructions, which will help you to decode many good things that they bring.

3. The purpose of the use of Tarot cards, Oracle cards, and Lenormand cards

Tarot cards are used as psychological therapy, they show why people act like that, how they perceive the problem and how to solve it. They tend to favor analyzing and interpreting from the root of the problem to predict future trends, helping people to determine the current situation and visualize ways to choose the best path for themselves.

Lenormand cards are used to predict the future and look back on the past. For Lenormand, you are like observing a slice of life with the up and down movements of one or more people, as well as seeing the results for their actions. In the West, people have another name for Lenormand – Fortune Telling Oracle, which implies it is dedicated to prophetic problems.

Oracle cards are used to get the beautiful advice, great ideas, the creative inspiration that the author brings to users. Oracle’s advice will follow the theme of the deck, often with positive and beautiful meanings. At the same time, there are Oracle decks that help us to recognize the problem at an overview level. Thus, the purpose of the use of Oracle depends on the topic that the author brings, which will often be clearly stated in the accompanying guidebook.

Obviously, Tarot, Lenormand, and Oracle cards are three different “divination” systems, all of which can give answers to the same questions with different perspectives. Each type of deck has its own strength.

How to Use Oracle cards Efficiently