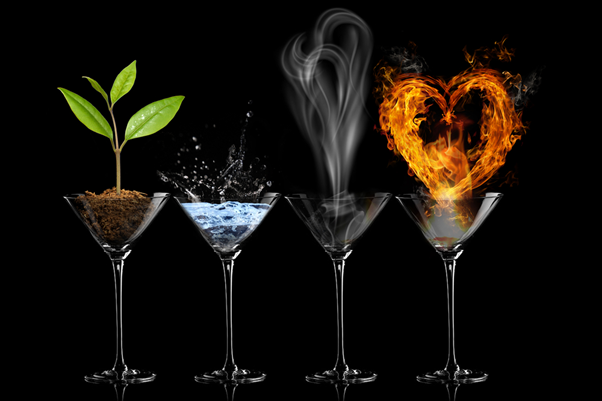 Knowing the nature of each element as well as each of the four suits in Minor Arcana will be the key to understand and master the interpretation of each card, thereby, Tarot reading activities can be more profound and professional.

At first, it was a Polo stick but when Tarot was introduced in Europe, it became Scepter (Italy) and Baton (Spain) because no one knew what Polo was. In the Western playing cards, it is usually called the Club. From a historical perspective, Wand/Stick is associated with farmers or workers.

The Wands in Minor Arcana symbolize the desire to rise up, the motivations for things, the desire to guide, and the spirit towards the future that lead to action. They show the purpose behind each action and seek original value in the meanings of experiences but lack appreciation for them.

The vivid image of the Ace of Wands represents the sole purpose, as well as the ego or the self-positioning. The Wands promote the desire to grow and create. However, when they were engrossed in starting new things, they did not have the patience to complete or maintain the job.

The Wands are light that illuminates awareness and empowers creativity. They want to expand awareness, as well as nurture everything with their enthusiasm. Emotions such as fear and desire are often expressed very strongly in this suit.

The Cups keep an extremely balanced state until they become Hearts in Western playing cards. According to history, they are related to church and love.

The Cups received all the impulses and responses back to them (cups are always open). They go with the flow when they cannot resist and find ways to get together. The unique feature of the Cup suit is that they will become whatever shape they flow into. Therefore, they are easy to adapt, however, they sometimes cannot accept new ideas, especially when those ideas lack emotions.

The Cups in Minor Arcana represent love, relationships, and imagination. They nourish and bring connection. They help you to be open to the inner feelings of things and the connections between you and others. Options at this stage are frequently based on intuition. They welcome everything and, for that reason, can become indistinguishable, lazy or listless. Although joyful emotions seem to prevail in this suit, there are also grief and loss besides.

At first, Swords had a curved shape, until they became straight and the Spades in the Western deck. They are often given to engineers, aristocrats, and battles in history.

The Swords research many initial ideas. They think about them, talk about them, fight for them, arrange and prevent things that distract the matter. They make judgments based on reason and logic. Their ways often bring pain and sorrow, things that cannot be resisted “the light of morality” will be destroyed without mercy.

The Swords in Minor Arcana represent machines that “fight and fly”. They represent intelligence, reason, logic, analysis and follow-up actions. They keep an objective view, even for themselves. The Swords focus on the transformation and development of ideas, as well as communication. Emotional control rigidly leads to fear of things that they cannot understand.

Their advantages are being able to recognize every aspect of the matter, consider them carefully, form clear perspectives on the subject, and be able to communicate with everyone. In terms of disadvantages, they use their logic and tactics to deceive others. The fear of losing the mind leads to extremely indifferent emotional connections that are hidden behind objectivity. In fact, the emotions of fear and grief in this suit are especially strong, besides, the anger and jealousy are also very huge. The Swords are quite slow with the emotions of expectation and desire. The Swords swirling in the air reminds the breath and the birth of the sound.

The origin of this suit is Coins (this image still remains in many decks) or becomes the Diamonds in the West decks. In history, they have been associated with the class of traders and merchants. In the 18th century, Antoine Court de Gébelin called this suit “amulets”, and later Éliphas Lévi called them Coins/Pentacles (a kind of amulet). Because the Pentacles are often considered to be talismans (giving off the energy of famous warlords portrayed on a coin), money becomes an ideal guardian. This change seems to fit very well with the magical feature of this suit.

The Pentacles in Minor Arcana represent the fruits of your labor, the result of a process you have experienced with other suits. We created a new position of safety. Literally, they are “ground” (the Earth) where new ideas are born.

They make you feel safe or support you, in society, they are family, money, tradition, and control or power. In addition, they can refer to the inner aspects represented by Hara in Western philosophy. The Pentacles also represent valuable things and rewards for completed work.

The Pentacles are the embodiment of Mother Earth and the nature of all things. They give you gratitude for the creation and your own body. They also try to achieve physical control, whether through self-made products or skills and knowledge of the operation of all things.

A secret principle that magic and transcendental experiences are hidden in seemingly trivial objects, like diamonds hidden in the ground, remind you of the value of experiences in the real world. In general, this suit brings happiness mixed with a little sadness and fear rather than emotions in the Cups suit.

Although there are many elemental correlations, the dominant themes of each suit are purely based on their own symbol. Wands symbolize reproduction, Cups nourish, Swords cut, and Pentacles paid for everything.

When we consider them further by linking them to a chain:

The Wands suit is also known as the Minor Arcana suit of Rods-Scepters-Batons. Its element is Fire, it represents the desire to develop and then it will be the embodiment of the motivation to move everything, the desire to lead the road ahead and aspire to turn action into the future.

The Wands suit has a reason behind all of its actions, it mainly finds the official value in the sense of experience while lacking in the evaluation of that form. It points out the desire for self-development and creativity, wants to enhance awareness as well as blows up the flame of enthusiasm into everything.

When you receive a card from the Wands suit, you may want to ask yourself what has kindled a flame of attention within you? Do you have a burning desire to do something? Are you feeling you are being burned? Do you see the blazing red? What is rising inside you?

Normally, Wands will indicate the following:

The Cups suit in Minor Arcana is also called Vessels, Bowls, Containers, Hearts. Its element is Water. Water will form the shape of whatever it flows into. Therefore, it brings in good things but at the same time, very messy. This suit represents the downstream flow and seeks harmony. It takes the urge from the Wands and responds back. It represents love, a relationship, imagination and simultaneously, it is full of love with a sense of connection. The Cups can help you to open up your feelings within yourself and your connections with others. The choices at this stage seem to be instinctive.

When you receive a card from the Cups suit, you may want to ask yourself whether you are going down the stream, where is it taking you? What emotions are flowing (drowning) in you? Are you still not going deep into your soul? Did you go too far? Are you too weird? Is this your cup of tea? What is coming along with that wave?

And this is the manifestation of Cups:

The Swords in Minor Arcana suit is sometimes called Blades, Knives, Feathers, Arrows. Its temperament is very moderate. This suit represents understanding, rationality, logic, analysis, and actions that take these features logically. It analyzes the original idea: think about it, talk about it, get into trouble with it, organize it and cut out what is unrelated to this matter. Then, it judges independently based on logic and reason. The methods it offers usually bring pain and anxiety, things that cannot resist the light of truth will be destroyed. At the same time, this suit develops based on the exchange and development of ideas, therefore, it also embodies communication. The most striking feature is that it can see the whole aspect of problems, consider them carefully and give clear opinions.

When you get a card in the Swords suit, ask yourself what is the purpose? What and who can you leave? Do you say anything too sharp? What is hiding the problem? How can you clean this atmosphere? Are you being overly cautious?

The Swords suit is usually the embodiment of the following:

The Pentacles suit in Minor Arcana is also known by other names such as Coins, Disks, Circles, Stones, Diamonds. Its element is Earth, which represents the fruits of your labor – your results with other suits. At the same time, it is the foundation for new ideas to expand. It makes us feel safe with such things as houses, money, tradition, power control, etc, these are all things we appreciate and often receive in terms of rewards for what we have done. It gives us an appreciation of our form and body. With the Pentacles suit, we strive to gain material achievement through careers and skills or through an understanding of how things work around us.

When you get a card from the Pentacles suit, ask yourself what is the reason you came to the Earth? Are you being treated like a grain of salt on Earth? Where is the diamond in the dust? What is as sturdy as a stone table? What will be the foundation for you? How can you get out of the situation like this?

Usually, the Pentacles suit will indicate the following: