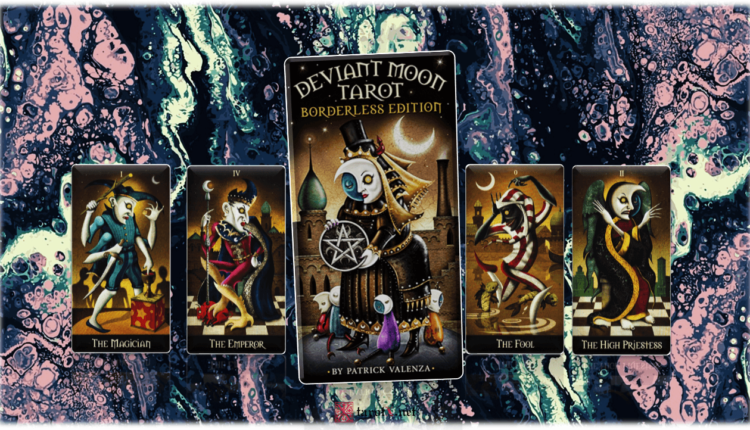 I. Origin of the Deviant Moon Tarot deck

II. The style and inspiration of Deviant Moon Tarot

Deviant Moon is a Tarot deck illustrated by author Patrick Valenza in 2015 with a unique surreal moonlight style. Inspired and combined with images of graveyards and asylum, Deviant Moon Tarot’s cards have a powerful appeal and are completely consistent in The Fool’s journey to the King of Pentacles. The cards feature characters with a surreal mood and visuals that are designed to subconsciously illuminate and reflect various themes through detailed images. Darkness manifested both on the surface and deep within the cards. The images of graveyards and tombstones cause a feeling of ghosting and creep into every element of the card, emphasizing and illuminating the deepest parts of the human subconscious.

The author of this deck is also a researcher on the Tarot, having spent many years completing this artistic deck. The Deviant Moon Tarot deck is currently in the Top 10 All The Time voted by Aeclectic, and is currently being released in both the bordered and borderless versions.

Looking at these pictures, the user of the deck easily feels like his deep subconscious is being awakened by that illusory world. The coldness of the deck is also reflected in the images of smoke columns or dark abandoned buildings. Deviant Moon Tarot has always been considered a masterpiece of the Tarot deck from the first day of its release and is always on Aeclectic’s list of The Most Beautiful/ Most Popular Tarot Decks of All Time.

The author took more than 3 years to perfect the deck, but there are cards he began sketching more than 10 years ago; therefore, this deck has reached the level of precision and completeness in every detail. The deck follows the Rider Waite Tarot standard and is not too difficult to learn for even beginners. The standard version comes with a booklet, but users can choose to purchase a separate companion book to learn the ideas and deeper meanings on each card besides the information stated in the booklet.

Patrick Valenza, the creator of Deviant Moon Tarot, was given his first deck of Tarot cards at the age of 9. The characters residing in the Book came to Patrick in his dream and his imagination from childhood onwards. He told the characters’ stories and how they evolved in the new book, also named “Deviant Moon Tarot” accompanying the deck. It sets a standard for other deck creators. It is very large and really heavy cardboard (4lbs), and a complete pleasure to study.

III. The visual and the package of Deviant Moon Tarot

Valenza used a combination of drawing, photo manipulation, and adding textures to his artwork. The background was inspired by the abandoned buildings near his home on Rhode Island. As a child, he was drawn to graveyards and a mental hospital nearby built in the Victorian period.

Each image on the card is shown enlarged so you can see every detail, also included previous versions of the card and the artwork they evolved from. Overall, it is a great addition to any Tarot lover’s treasure. You don’t even have to be a seasoned Tarot enthusiast to appreciate the inner beauty of the Deviant Moon deck.

In addition to the white borders around the edges, each card has a smaller colored border. Each Minor Arcana suit has its color: Pentacles is Black, Cups is Blue, Wands is green, and Swords is Red. Major Arcana’s outlines come in a variety of colors, available in black, blue, green, red, and purple. The borders of the Majors cards do not seem to be systematically fixed. For example, The Emperor (a Fire-element card) with a blue outline which aligns it with the suit of Cups.

The Deviant Moon Tarot’s book is formatted so that the card image appears alone on the right page. On the left page, Patrick describes each card in detail, explaining the symbolism and what it means to him. Then, he comprehensively defines the meaning of the card, in upright and reversed positions. On the next page, he describes the card’s progression accompanied by faxes of original drawings, many from his childhood and teenage years. While giving a precise explanation of the cards, Patrick encourages readers to allow their imagination to freely connect with images and create deeper meanings.

IV. Interpretation of some of the cards in the Deviant Moon Tarot deck

Deviant Moon Tarot portrays the dark side of a horror world, a place of death, mourning, and perdition. But that death and grief are most evident in the three cards: Death, Two of Cups, and Three of Swords. The Death card is an image of a horse with its white skull stepping on a younger one with a similar skull. The Two of Cups – the love and goodness card depicted a female ghost of the darkness dating a white skeleton. The Three of Swords card uses the image of a “girl” with a bloody heart pierced by three swords.

However, the smaller details in the cards are what convey more meaning. With the Death card, it shows a pregnant woman. Is the death of the child at the feet related to the birth of the baby in her womb? With her standing posture, the born baby will fall into the dead child lying beneath her feet.

In the Three of Swords, the girl artfully places one hand on her forehead and the other on the sword, as well as pointing at herself.

As for the Two of Cups, you can recognize the hand posture of the two characters. The “man” holding the cup with his left-hand and the “woman” holding the cup with her right-hand which creates uncertainty and unsustainability. Looking horizontally, we see cohesion, but looking vertically, there is no closeness or connection. In addition to showing cooperation and acceptance, it also shows more uncertainty and ambiguity, which are seldom seen in the first moments of love.

Several cards are considered to be brighter in the Deviant Moon Tarot, such as the Ace of Sword, The World, and Three of Cups. While the traditional Ace of Sword is still often meant for victory, explosion, and vigor, Deviant Moon’s version is quite lovely.

The World shows a mermaid standing on the ground and her hands like fire dancers in medieval European festivals. And the Three of Cups which inherently shows three people holding cups to congratulate each other, representing friendship and community joy, in Deviant Moon’s version, it is crazy when everyone is standing in the mouth of a giant fish sinking slowly into the sea. Interestingly, the author used many fish images in this deck.

About the four Minor Arcana suits: looking at the Pentacle suit, it is defaulted to be mechanical so you will notice that four court cards have lots of images of screws, engine, steam, chimneys, and copper barrel. King of Pentacle looks like a king of the mechanical industry. Similarly, you will easily see that in the Wands suit, the court cards are all ghost trees with the feature of wood, the Swords suit features metal with the image of Counts and nobles, and the Cups suit represents the darkness.

V. Five things you might not know about the Deviant Moon Tarot