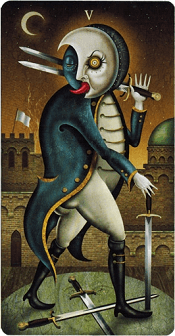 I. The Description of Five of Swords Deviant Moon Tarot

A foreign soldier enters the town in Five of Swords Deviant Moon Tarot. He disrespects the king, causing himself to lose his honor by his tactics. It is impossible to win against an opponent like that so it is best not to fight at this time. He gathers five of the enemy’s swords around him and feels gleeful about his victory.

The only thing to know whether he wins or he loses is the white flag in the distance. This victory seems to be a meaningless one because of a lack of admiration and cheating. Many times, victory does not come from your determination and struggles, but rather the renunciation or yield of others or the distractions and tricks that make others want to give up quickly. Cockiness, arrogance, and bragging are absolutely forbidden in this case if one wants to keep the peace, reputation, and image in the eyes of others. Be humble, let people know why you have this.

Five of Swords Deviant Moon Tarot shows you engage in conflict or recognize disagreement with others, leading to tension and hostility. Even though you believe you won, you can still be a loser because you have hurt others and isolates yourself. You try to act as though the conflict was in the past, but the others now have lost faith in you and don’t want to be around you. You feel like everyone is against you and you have lost some companions. Is your opinion really important enough for you to put your relationship in jeopardy?

Five of Swords Deviant Moon Tarot can also represent conquest. If you have shown some positive in the struggle, you will sooner or later accomplish your goals. However, on the contrary, you need to make a compromise between your own interests and the desires of your opponents. You will feel many obstacles ahead, and you do not want to face them, even if it is imperative to get what you want. Overall, you are in a struggle and will have conflicts of will with others.

As such, the Five of Swords Deviant Moon Tarot is an ambition but in a negative sense – too ambitious without regard to the consequences for oneself or others. The ultimate result will be a loss for everyone. Either you get ruthless victories or a frustrated loser. In any case, there is a negative connotation. If you focus entirely on winning your goal at all costs, you will lose your own demeanor and the reward can be nothing.

Arrogance and pride often go hand in hand. When you reach a tough victory like this, don’t think you are invincible. You have passed a challenge, and you have the right to feel proud but there is always a higher mountain. Bragging yourself as unconquerable will only make others displeased and find ways to prove you wrong. If you win by cheating or misleading, watch out for revenge by others.

Five of Swords Deviant Moon Tarot can involve treachery or the sudden attack by someone you trust without taking precautions against them. Be it an unfaithful partner or someone who is jealous of you and tries to sabotage you behind your back. Look at the other court card in the spread to discover more about this person. Be careful with people you trust at this point. It also talks about failure. Despite the constant effort, you can be defeated. If you give up your dream after this failure, you will live forever in misery. Accept your failure, and learn from it, and your chances of success will increase dramatically.

Also, the Five of Swords Deviant Moon Tarot can be seen from a completely different angle – a pointless victory. The man in this card either knows he is going to lose or tries to win, wasting energy and time meaninglessly. By choosing to give up, you really are the winner here, because you already know when to fight and when to retreat. Its advice is to choose your battle. You are tempted to fight to prove yourself right or to protect yourself when you feel challenged or intimidated by someone else. However, most experts agree that choosing battle wisely is better than fighting frantically. Making a good choice will bring about a life of peace and strengthen your relationships.

As a card of conflict, tension, and disagreement, the reversed Five of Swords Deviant Moon Tarot shows that you really want to end the battle now, so that you can forgive and forget, and then focus your energy to restore the relationships. The conflict is getting annoying and you realize that you can be the loser in this battle. Now you just want to get rid of everything and move on.

As such, the reversed Five of Swords Deviant Moon Tarot tells that you are more open to change. The arguments are over and you are ready to examine the situation with a whole new perspective. You are willing to put down your sword and start negotiating, trying to come up with a more effective solution. A return to Four of Swords is needed so that you can get out of tension and conflict. This is a good time to reach out to the people you disagree with, and make up for it.

The reversed Five of Swords Deviant Moon Tarot sometimes indicate a conflict in life that you have tried to leave but kept on following you. Old wounds are recurring and you have to experience fear and stress as you recall those memories. You are particularly concerned that history might repeat itself or that you might get hurt again. Forgive and forget so you can really move forward.

Maybe you still have pent-up resentment from previous wars that have made communication tough. This may remain unresolved and is having a negative impact on building a harmonious relationship between you and your partner.

The reversed Five of Swords Deviant Moon Tarot hints that you should ignore others’ opinions. You cannot please everyone and the loss of a few companions is not the end. Not everyone is willing to listen to your wishes and help you pursue your goals, especially when it affects their lives. And they will blame you for gradually being indifferent and distant to them because you are no longer with them as you used to be.

Finally, the reversed Five of Swords Deviant Moon Tarot suggests that you have finally gained some proficiency towards competitive conflict or combat. This indicates that you may be developing a tendency to automatically judge or criticize. If this is true, you are successfully giving up the personality that tends to exaggerate the flaws and weaknesses of others. Much of your credit is that you are using your energies in a more creative and positive way. After you have overcome an incompatible conflict, you use your energies in a positive direction.

IV. The guideline of Five of Swords Deviant Moon Tarot

Five of Swords Deviant Moon Tarot refers to the harsh and serious process of clearing the battlefield after a conflict. The war is generally inconclusive, but in this fight, there are painful casualties. This card encourages the losers to carefully examine what happened so that they can come up with a new strategy and avoid more failures. It is necessary to regroup and rethink the plan, uncover your blind spots and weak links, and take corrective measures before returning to the field for another round.

In this modern age, when battles are often waged verbally, by law, and by contract instead of weapons, the more reasons we have to test our approach, style, strengths, and weaknesses. If we have underdeveloped communication skills or lose objectivity during times of stress, our ability to achieve goals and dreams decreases. However, if we avoid letting ourselves be haunted by forthcoming unhappiness and detours, we will continue to achieve those goals. Try to learn something.

Five of Swords Deviant Moon Tarot advises you to be prepared for frustration about how your fellows are setting their priorities. It seemed that human inferiority might be undermining goodwill in the current situation. Due to a strong cultural trend toward scarcity thinking, your self-benefits view predominates. Try not to get too angry or jump to conclusions. Just because others may feel pessimistic about the world, but their reality doesn’t necessarily undermine you. Definitely, there is no use struggling or competing with them. Your challenge now is to learn to avoid confrontation and elicit a more developed response from people. At least, be assertive in setting boundaries for yourself.