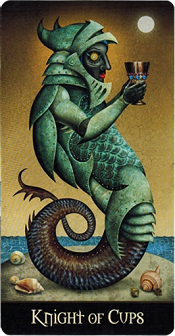 I. The Description of Knight of Cups Deviant Moon Tarot

The dedicated Knight shows the world what he has found: a gift of hope. The long search has brought him to the endless sea. The armor that once was so splendid on him is now covered with moss. His journey changed not only his physique but also his soul.

Knight of Cups Deviant Moon Tarot is seen as a young knight holding a cup as if he is a messenger of the ocean. Unlike Knight of Wands or Knight of Swords riding the beast rushing forward, the Knight of Cups slowly moves forward, creating a calm and peaceful atmosphere. This knight wears armor shaped like a fish which is a symbol of spirit, consciousness, and creativity. The helmet and fishtail are symbols of a dynamic and creative imagination.

Knight of Cups Deviant Moon Tarot is the most feminine of the Knights, but that does not mean he is not a knight. It simply implies that he is connecting with his intuition and emotions, and using them in his own way to create romance and seduction. He is very charming and attractive towards others, regardless of their gender, while still expressing in the midst of life’s romance in his unique approach. He lives in an abundance of love.

This Knight also relies on his emotions to guide his life. He is the one who is governed by his heart. When faced with a decision, he will always do what his heart believes is right, whether reasonable or not. Decisions will be made without much thought, as he is mainly based on the experience of warmth, friendliness, love, and the desire to share with everyone. Like all Court cards, the Knight of Cups Deviant Moon Tarot can manifest as an event, a person in your life, or a part of yourself.

Knight of Cups Deviant Moon Tarot often appears as a messenger, an invitation or the appearance of someone or something that brings good feelings. He offers an interesting invitation, resulting in an emotional experience that will energize and put you in a state of excitement. In addition to being an informant, the Knight of Cups can also represent the wisdom that comes from your dreams and help you overcome life’s obstacles.

Knight of Cups Deviant Moon Tarot represents the commitment of the creative adventures implied in the Page of Cups. By the time Page had just found her creative inspiration when she saw the fish in the golden cup, Knight had it before and was preparing to explore the world of imagination and creativity. If you are starting a new creative project, bring your imagination into the real world. Actions are the lifeblood of your vision, so if you do nothing with your dreams, they will be forever vague and unrelated to your life. Knight of Cups Deviant Moon Tarot delivers a warning about being caught up in life’s fantasy and romance. Imagination is exhilarating, but it will forever be an illusion if you cannot connect it to reality.

Discover your passions and big ideas at this point. You will find that you have been attracted to a passion or hobby and now is the time to do something about it. You don’t need to burn the stage, more importantly, balance ideas with actions and make sure you are actively working to achieve your goals and ambitions.

The reversed Knight of Cups Deviant Moon Tarot allows emotions to take complete control of one’s life. He may become moody, jealous, or let his emotions rise to the point of being out of control. He rushes to conclude everything before clarifying the matter. Examine yourself and what you are doing, or realize that the person mentioned in the spread is acting on their feelings, not their mind.

The reversed Knight of Cups is constantly looking for a reason or a way to blame his problems on others. He is not mature enough to realize that until he takes personal responsibility for how things are in his life, he will continue to add to conflict instead of exercising his natural ability to help and heal.

The reversed Knight of Cups Deviant Moon Tarot also points to a very attractive, romantic, and interesting situation at first, but it turns into something very strange and disappointing later on. It is as if you are enjoying the sweet fruits that life offers and realizing that everything is not as it seems.

IV. The guideline of Knight of Cups Deviant Moon Tarot

This card has traditionally been named Knight, but in some modern decks appears as Prince. Traditionally, the card in this suit represents a return home – depicting his true heart’s home return after a long journey. Like the prodigal son, he is likely to return after a long period of being estranged from all he loves.

His interest in adventure has been exhausted – no longer romanticizing battles or traveling in unfamiliar lands. Now he wants to go where he will be recognized, wanted, and welcomed – where he does not have to fight every turn. He now has the attitude of an older and wiser man.

Knight of Cups Deviant Moon Tarot recommends jumping into the new situation with both feet. Take part in what is happening in the present. Don’t think about the path you have to take to get back here. There is no need to be leisure about what seems familiar. Look into the basics and you can see that they represent something you have mistakenly rejected in the past. Be humble enough to see things through new eyes. On a deep level, your heart and soul are being nourished. Don’t be tempted to run away again – this is where you belong. Your entire journey is designed to bring you home with new appreciation.