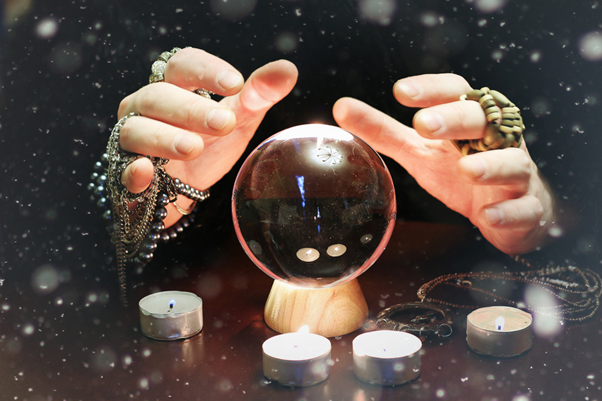 The operating mechanism of Tarot cards is very simple – a deck of 78 cards in which each card has a specific meaning that related to a life philosophy or life experience. In Tarot spreads, cards are shuffled and each one is placed in a specific position within a prearranged spread. Each position represents a specific aspect of life such as “recent status” or “current emotions”. The reader reviews and interprets the relative meaning of each card to the current situation in the life of the querent.

<< See more >> What Are Tarot Cards? Things That Beginners Should Know

The operating mechanism of Tarot cards is easy to describe in words, however, it suggests a very important question – how does it work? How do the cards arrange themselves into a “meaningful pattern”? Why beautiful pictures on cards can be mysteriously arranged into an order that gives us specific messages about life and operating rules of the Universe which often beyond what we can self-aware? The first and most important thing to affirm is that no one knows for sure what the answer is.

One could claim that he found secret documents, was revealed by some Egyptian God or had some proven arguments, etc, to answer the question. The fact that no one would dare to claim that is the absolute correct answer. If someone still insists that he knows the whole answer correctly and completely, he may be trying to trick you into selling a service or item.

In fact, if you do not know for sure about the answer, the best thing you can do is give some theory to evaluate and compare. Many people have proposed a number of different theories over time. The article below will summarize the most popular views. We will consult them even though it is not yet true. Somehow, these hypotheses can enhance our knowledge and experience of divination and the way Tarot cards operate.

This hypothesis assumes that there is nothing supernatural or mysterious behind a Tarot cards spread, but it is not quite so. The key idea is that the cards are unintentionally selected and appear in completely random order. However, the interpretation of their meaning is still useful. Most of us tend to analyze situations in a very logical way that is based on a set of unconscious assumptions and available expectations, and therefore, we tend to only reach a standard conclusion that may limit our understanding of situations.

Though, the most effort in analyzing the meaning of a “random” card into a “meaningful” model forces the Tarot reader to give thought beyond their common limits of thinking which may lead to new ideas or detailed information and can motivate their intuition to start solving problems in new and more interesting ways. Therefore, efforts to find meaning from these random things have helped us to get a deeper and more original perspective on our problems.

The concept of Synchronicity

This is a concept that psychologist Carl Jung is very interested in. He argued that there is another reason why events occur (synchronization) as well as the cause and effect relationship (every event that happens is the result of a specific cause). From another perspective, synchronization is an alternative to “coincidence”, implying that events that are randomly formed sometimes have meaningful coincidences.

These are events that appear entirely based on luck but give a certain meaning to their owners. So, by using a complex system such as spreading Tarot cards, we are attracting synchronization to our lives and the cards will sort into an order that tells us something useful about ourselves or to answer the question we give out.

This hypothesis supposes that our subconscious is more potential than what we have ever been aware of. Different fields in spiritual research give the subconscious a range of powers and capabilities that we often do not know. In the Tarot spread, in some way the subconscious “knows” the order of the Tarot cards, and, through shuffling cards, we transmit consciousness to the cards so that they appear in a meaningful order to answer what we wonder based on the deep insights that the subconscious may already contain.

In general, magic means to make events happen in accordance with your will. In this case, the reader’s will is that the cards will sort themselves in a meaningful way to reveal something useful. This is, of course, not a mechanical explanation but just a description in a specific way to decode Tarot cards. It involves accepting an explanation as if magic is real and the Universe really reacts and changes according to an individual’s will. It also shows that there are some skills needed to interpret cards. The uncertainty caused by the randomness of disturbance makes it easier for the order of the cards to be affected since they are not fixed and can only be turned on in the random order.

Tarot seems to operate in a different set of rules than what we are dealing with in the mundane reality. We often do not expect random events arranged in such a way that they reveal the truth and understanding of what is happening in our lives. Because of that reason, we can see that Tarot cards amazingly operate.

The invisible Pixies method holds cards when you mix and arrange them in a certain sequence. The Tarot reader will whisper the true meaning behind the images into their own minds. This brings high generalization as well as building a rich imagination for each answer to the problem. This method is said to create a balance between spirituality and knowledge to create reasonable ways to solve problems.

Of course, these hypotheses have not been proven to be true. Keep and see them that it is a temporary explanation.

The important thing when learning Tarot is that they work not according to a certain rule. Each card is a different stream of thoughts and their meaning depends on the interpretation of the tarot reader. All methods of decoding Tarot cards are based on each person’s life experiences. You can’t force others to accept your judgments or vice versa. With spiritual sciences, the element of surprise and randomness always goes together.

That makes Tarot a powerful attraction for many people. It is for this reason that I believe behind the abstract images is the universe’s endless knowledge treasure. Take a deep breath and listen to your heart.  You will find something unique that Tarot cards bring to your mind.