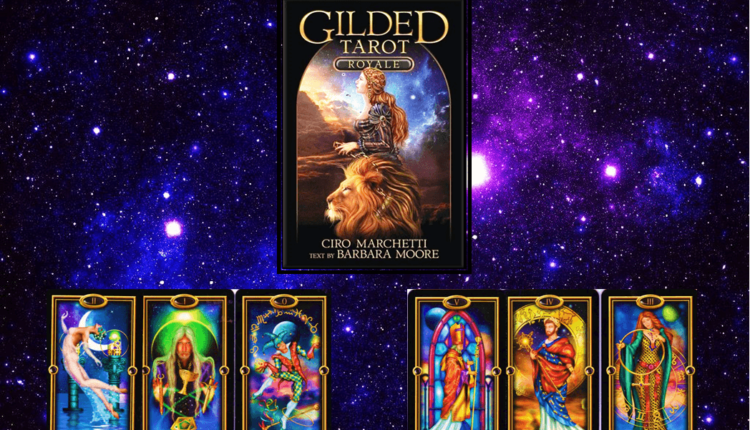 I. Origin of the Gilded Tarot Deck

Gilded Tarot is an intuitive and gorgeous Rider Waite Smith-style digitally designed Tarot deck from talented author Ciro Marchetti. The deck is available in both versions from Llewellyn and from the author himself. Most decks with impressive designs are usually just collectibles. The deck has overcome this limitation by having both the beautiful art of a Tarot deck and the Rider Waite Smith standard. This deck is a wonderful piece of work with its bright tones and mystical use of imagery and a unique deck for anyone who wants to experience the Tarot in a common and easy way.

This deck is designed by acclaimed author Ciro Marchetti. Besides, its guidebook is written by Tarot expert Barbara Moore. This is the perfect guideline to this deck that even a Tarot beginner can practice right away.​​

Marchetti did a lot of research before starting the Gilded Tarot. One of the main reasons is that he does not want his work to be seen as distinct. He has succeeded in creating a deck that is very close to the traditional style – a deck for the Tarot beginner. The deck itself is a beautiful digital work. If we pay attention to detail, it seems to have come from another world. Marchetti said the theme of the deck features many mechanical devices that act as a bridge between the scientific and mystical worlds. We will see this in the Wheel of Fortune, the Star, and the Moon cards. There is a special edition of this deck published by the author Marchetti himself on his website, for a rather high price. However, the version released by Llewellyn Worldwide itself is more affordable, making the deck easily accessible to Tarot readers.

All of the cards in the Gilded Tarot stand out, but there are also some that are truly impressive. We can refer to the first card of the deck which is the Fool. Marchetti portrayed the Fool as a clown. This is also the first card we see one of the prominent themes in this deck that is Astrology. The Fool is juggling the 12 zodiac signs with the moon behind him. He is dancing with a gold bracelet on one of his legs and appears to be stepping over a golden cane wrapped with a ribbon. There are too many hidden aspects in this card.

The high Priestess is depicted between two pillars with a crescent moon in the background. These pillars stand underwater. There is the image of a woman in a transparent robe, bending back over the water unconsciously with nine glittering jewels (representing the nine planets) afloat over her head.

Death is one of the most impressive cards in this deck. In the middle of the card, we will see a blue-gray mask. A ribbon with a white symbol (with a five-petaled flower in it) is flapping towards the right side of the card. Underneath the mask is a shield with a unicorn symbol.

The Ace of Cups shows a large golden cup with a blue eye in the center. The light is pouring down from above. On the cup is an arc of six symbols representing the cycle of the moon.

The Ten of Cups presents a typical family scene but only the mother and daughter. There is also a family of cats sitting in front of a house. Instead of a rainbow line, we can see an image of ten cups arranged in an arc over that house. Marchetti mentioned this is the scene where the head of the family is coming home to his wife and children. It is quite confusing as part of the family is missing here.

The Queen of Swords can be seen as the favorite Queen in this deck. The Queen outfit is in the same medieval style as the other court cards. She is standing and is raising her sword while wearing a purple cloak. Her posture is not threatening but poised to defend herself. Light reflects off her sword and dress, showing the relationship between truth (the light of the sun), thought (crown), and action (sword).

The guidebook that comes with the Gilded Tarot is meticulously compiled with an introduction to the suits, the meanings of the numbers, the sequence of the Major Arcana cards, instructions on how to ask questions and how to choose a significator, etc. There are black and white scans for the Major Arcana cards but none for the Minor Arcana cards or the court cards. The description is so basic and complete that there is no need to refer to other Tarot books published by Llewellyn. The book is very well presented from start to finish.

Some images and symbols in the Gilded Tarot deck are in traditional style while others are mythical and fairy-tale. Every time you use it, you will see something new and different compared to the other decks. One of the things Marchetti mentions in the author’s note is the use of animals: be aware that they are not always there in their mythical form – Sometimes they are there simply to observe the action within the card, and to draw your focus to the action in question. If you do not realize this, you can read more than what is implied in these cards. For example, the owl in the Nine of Swords is there to help you ask questions, as well as (according to Marchetti) to reinforce the card’s night scene. The deer in the Two of Wands is there to help make a decision while in the Ten of Wands, they appear to observe.

Llewellyn Publishers’ layout has the deck and books arranged in a cardboard box with a small white paper box and a black mesh bag. There is a headline on the little white box: “Caring for your cards”, which includes suggestions for decorating this box with symbols of protection and power, wrapping the cards in a protective cloth or placing them in a bag, and storing the cards with quartz or other stones to purify their energies. All of these suggestions are very helpful, although sometimes in the Tarot world, it can be difficult to decorate a white box with any symbols.

The cards in Gilded Tarot are approximately 2 ¾ x 4 ½ inches (equivalent to 7 x 11.5 cm size) which is a standard size for small hands. They are well made and glossy. The back of the card is black with a ¼ inch (equivalent to 0.6 cm size) gold border surrounding a “flame” on a blue background. With this design, we cannot tell if the drawn card is upright or reversed.

The front of the card uses a similar black background tone with a gold border. In the middle of the top border is an oval. Regarding Major Arcana cards, this oval is black, bearing the card’s number in Roman form. Regarding the Minor Arcana cards, this oval has a color that represents each suit: Red for Wands, Orange for Cups, Blue for Swords, and Green for Pentacles. In the middle of the bottom border is a yellow rectangle with the card’s name for the Major Arcana, suit number and name for Minor Arcana, and suit name and name for Court cards.

There are several useful spreads presented at the end of the book, including various versions of the Three Card spread (Past/ Present/ Future, Body/ Mind/ Spirit, and Choices); the Celtic Cross spread and a spread by Katie Vyvyan entitled the daily spread, which is quite interesting. The positions in this spread are defined as Works (whatever you are accomplishing throughout the day, either at work or at home), Home (the people and activities surrounding the home), Unexpected (literally, the unexpected things that happen during the day) ), Your Role (your moods, actions, and reactions), and Outcome (the outcome of the day, and the spiritual lesson(s) learned).

IV. Who is the Gilded Tarot for?

Gilded Tarot is a standard Rider Waite Smith Tarot deck with updated images that make it easy for every reader to connect.  It is a great example of traditional structure in non-traditional imagery. This is a deck for anyone to use and for whatever purpose they want. There are some nude images in this deck, so it probably won’t be suitable for use with children. Tarot beginners and Tarot readers of all levels will find a connection when using this deck.