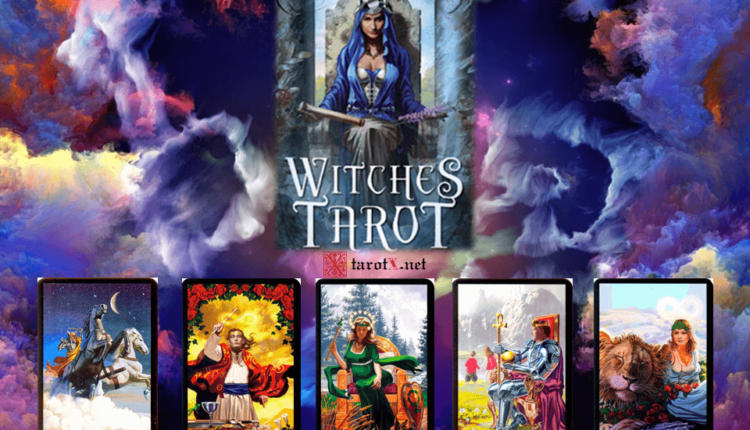 I. Introduction and concept of Witches Tarot Deck

The Witches Tarot is a deck of attractive images with the emphasis on natural Pagan symbols following the structure of The traditional Rider-Waite-Smith Tarot (RWS). It was composed by the Author of Witch and Llewellyn – Ellen Dugan (also the author of the guidebook of the same name) and Illustrated by Mark Evans.

The 78-card Witches Tarot deck was published by Llewellyn Publishing in 2012. The Witches Tarot is a deck of cards built on the backdrop of an era that went down in European history – a time when witches and wizards lived. Author Ellen Dugan is an experienced reader and comes from a witch family background, while artist Mark Evans is a renowned digital style artist – a combination that makes up one of the most beautiful modern decks in the world.

The companion book of the deck not only provides the meaning of the cards but also contains 4 additional spreads designed specifically by Ellen Dugan for both reading cards and practicing magic. The card images are drawn borderless and follow the traditional RWS standard, with some cards being renamed to suit the setting, such as The Seeker instead of The Hermit, Pan instead of The Devil.

Each Major Arcana card is associated with a position on the tree of life. Besides basic knowledge, readers will have a deeper understanding of Witches Tarot if they possess knowledge of Kabbalah. In general, this is a deck for all readers.

There are some readers who think that Witches Tarot will not really follow the traditional RWS style, but will be more mystical and have more symbolic patterns than RWS. However, the claim that the drawing of the deck features the immediately recognizable Pagan symbols seems a bit too much since most of them are not specific Pagan symbols.

In the meaning of Pagan Symbolism, Dugan and Evans focus more on plants and sometimes animals throughout the deck. The plant species used were more diverse than the standard RWS, which typically consisted of roses, lilies, and generic plants.

The authors have focused on using plants/herbs/flowers and stones to symbolize or emphasize the meaning of each card. In some cards, Dugan and Evans use animals/birds/legendary mascots to bring new colors or to complement the RWS details, but at the same time is still based on Pagan teachings.

The most obvious change in Witches Tarot from RWS style lies in the naming in Major Arcana suit:

The Wheel of Fortune/the Year is quite different in meaning, while Fortune is used to denote chance or luck, the Year refers to a cyclical and predictable event. This card renaming is common in Pagan-themed decks. Regarding the Devil/Shadow Side card, this change seems to make sense, since the Devil is a purely Christian symbol, which is sure to worry or even frighten the reader. Dugan’s adaptation from Justice to Karma is also quite interesting, as both mean the same thing, but Justice has a bit of a patriarchal and Christian connotation. Dugan also mentioned a passage on Llewellyn that each card tells a story and that XIX – The Sun depicts her son, Kraig, as a child.

The cards of the Cups suit in Witches Tarot have some features about mermaids. The mermaids are depicted as beautiful, topless but elegantly drawn women. Seashells are attached to the silver cups and they become the decoration throughout the suit. The images of dolphins and starfish also appear quite a lot in the cards. Almost every character in the Minor Arcana is dressed in blue with a background related to water such as ponds, lakes, rivers, streams, waterfalls, and oceans. In her article “Every Card Tells a Story…”, Dugan mentions her husband as the man who appeared in the King of Cups, the Knight of Cups as her son Kraig, and the Three and Nine of Cups outline other members of her family.

The Swords suit describes the fairies of the Two, Three, Five, and Queen of Swords cards. The fairies are not very detailed and prominent and are probably the most unrealistic in the deck. In addition, these characters are presented in monotone colorants with different shapes that add shine and brilliance. These fairies are not quite the wind goddesses of the Air element. Birds also appear quite often. The Ace, Page, Knight, and King are associated with hawks, the Four and Seven of Cups use peacock feathers, the Five and Six of Cups feature dragonflies, the Ten of Cups is a perched owl, and the Queen has birds chirping on her throne and red-billed blue magpies flying around.

The background of the Swords suit in Witches Tarot contains images of mountains and hills, sometimes barren fields. Mountains often represent the element of Air, reminiscent of the symbolism of Alchemy. The Five of Swords card is one of the biggest differences to the traditional RWS: five swords soar, swinging, pointing at a dragonfly, while fairies move through. In her article “Every Card Tells a Story…”, Dugan refers to the Knight of Swords as her son, Kyle, and the Queen of Swords as her daughter Erin.

Dugan’s Wands cards all feature a red ribbon wrapped around a blooming hawthorn branch. Dugan chose this tree because it is associated with the Fire element and fairies (of the Air/the Swords suit). Some Dragon species are also included (Dragons are usually associated with the Spirit attribute) but not the Fire Dragon, which usually represents the Fire attribute. Most particularly in the Five of Wands, a dragon exhibits all five attributes (blue for Water, green for Earth, yellow for Air, red for Fire, and purple for Spirit). The other dragons are placed in the Six, Nine, Ten, Knight, and King of Wands cards.

In addition to dragons, Dugan also commonly uses yellow/orange cats (in the Two, Four, Page, Queen, and King of Wands cards), to combine with Fire. Every character in this suit wears red and yellow costumes. Note that the Six of Wands can easily be confused with the Knight of Wands because both have the image of a man riding on a black horse. For the Fire attribute suit, the background is quite strange with many shades of blue. In Dugan’s article, she interprets a grandchild who could be the Page of Wands.

In the Pentacles of Witches Tarot, all cards except the Three of Pentacles are painted in yellow tones. This may annoy some readers because according to most Pagan and Wiccan traditions, the Pentacle suit is always associated with silver, the color associated with the Goddess who rules over the Earth and Moon, corresponding to the Earth and Water. Gold is the symbol of the Male God, representing the Sun, holding the attributes of Air and Fire. It should be noted that these yellow Pentacles cards traditionally represent the material aspect of the deck. There are no other gnomes or mythical mascots presented here, which would be strange compared to the other Minor Arcana. Instead, Dugan uses a variety of familiar animals (perhaps more familiar with the Earth attribute).

A cat in the Three of Pentacles, a crow in the Eight, a falcon in the Nine, and a dog in the Ten and Queen of Pentacles; the Page is depicted with a white-legged hind and the Knight is with a deer. The scenery portrayed in the Pentacles is the most diverse in the entire Minor Arcana suit, with lush trees, buildings, and monumental architecture.

The Five of Pentacles is also another difference from the traditional RWS: a gold pentacle is hanging on a dead tree, due to the Pentacles suit and Earth attribute associated with Winter. However, in the Cups suit, there is no detail about Autumn. Spring and Summer can be hard to distinguish because they are quite similar (Dugan uses flowers and greenery throughout the deck). The question is why include only 3 seasons and not 4?

Finally, it should be noted that Dugan has included her own model in the Nine of Pentacles. This feels strange at first, but it’s not uncommon for Tarot enthusiasts. For those who read Dugan’s books, this can be a bit distracting (or maybe not). The meaning of her personal card: happiness, confidence and independence, ability, success and prosperity.

There are many images in Witches Tarot drawn by computer. Mark Evans has created countless masterpieces here. The characters and cards are all wonderfully drawn as many of Major Arcana’s cards are remarkable. What the deck really lacks is consistency, but it probably won’t affect readers much. Some of the details in the cards are made to look like cartoons while others are like unedited pictures. Perhaps a section of readers would love the deck more if Evans sketched out the characters in a consistent style throughout the deck.

A plus for the deck is its backside. In the middle is the Pagan symbol of the Three Goddesses (Maiden, Mother, and Crone) corresponding to Waxing crescent, Full moon, and Waning Crescent. But a bit disappointing is that the back of the card is not designed to be viewed backward. The top half of the card is pansy pink stars while the bottom half is lilac stars. This is truly one of the Tarot decks with the best backside.

IV. Who is the Witches Tarot for?

The Witches Tarot deck is printed according to the standards of Llewellyn Publishing with a large decorative outer box, an accompanying guidebook, and a small white box containing 78 cards, sealed. Dugan’s guidebook is included, as are most standard books that come with the other deck. There are, however, some interesting exceptions. Under the heading “Introduction” is Dugan’s personal experience with the Tarot, a quick glance at basic Tarot skills, and some reading advice for the reader. In the section titled “The Major Arcana”, Dugan gives a brief introduction to this Major Arcana before going into the cards’ meaning in terms of the picture of each card, explaining its meaning, keywords, Astrological associations, Deity associations, and reversed keywords. The same goes for the Minor Arcana, but Deity and Astrology are not mentioned in these.

In general, if you follow the witch school or Pagan, then the Witches Tarot is the choice for you, with attractive images while retaining the symbolic details according to RWS standards. This is a more suitable deck for beginners because it doesn’t have much to offer for those who want to gain a higher level of contemplation in the Tarot world. For those who love Witches, Wiccans, or Pagans, regardless of your Tarot experience, this will be a remarkable addition to your Tarot collection.