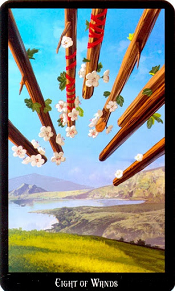 I. Keywords and corresponding associations to the Eight of Wands Witches Tarot

II. Meaning of the Eight of Wands Witches Tarot

Eight blooming hawthorn wands adorned with red ribbons descend from the beautiful blue sky. In the background, we see the silver lake, green valley, and mountain range. The serene backdrop is in contrast to the eight wands rushing. The eight wands are returning to the earth where they belong. This could show that many creative possibilities are in place. Similarly, the journey is coming to a happy ending. Everything you wish for is happening. Success is within reach. Excitement, activity, change, and movement are the messages of this card.

The Eight of Wands Witches Tarot is one of the few Minor Arcana cards that have no human figure, animals, or creatures in them. All we see is the landscape and eight wands scurrying towards the ground. This card is as basic and simple as possible, and so is its meaning. This is a card of movement and manifestation.

III. Message of the Eight of Wands Witches Tarot

When the Eight of Wands Witches Tarot appears in a Tarot spread, it announces that delayed projects are about to be completed quickly. This is a positive and exciting card that is full of movement and action. The spells that are given will manifest joyfully at this time. Usually, this card will represent business or leisure travel which is typically air travel. The Eight of Wands can also be for long-distance communication between two business partners. This is the time when fresh ideas and creativity reign. Therefore, decisive and quick action is key.

In the movie Ten Commandments, Moses touched his wand in water to spread the waves. His wand is a symbol of power to initiate events. It evokes the image of the wands in this card. They are symbols of the beginning of action and the effects and consequences of those actions. Before we act, we think, visualize, study, communicate, and fantasize. This is the place of the element Air – the sky. And finally, we decided to take action. We come up with viable and realistic ideas and then turn them into action.

The Eight of Wands Witches Tarot is often a sign that now is the time to reveal yourself. All elements are in place and will go well if you do not hesitate. Take the chance! If events are in the beginning stage, they will happen quickly. You may feel like you are being carried away by a whirlwind. However, the dust will settle down quickly leaving you to see how your plan worked.

The Eight of Wands Witches Tarot also has another meaning that is the appearance of fresh news or information. You may see or hear something important. The news can appear metaphorically, so stay alert. Pay attention to everything that happens to you right now. This card also implies an ending. Sooner or later everything ends. The eight wands in this card not only represent the beginning of events but also bring these events to an end. It seems that the wands in this card have run out of power and are about to fall to the ground. If you see the Eight of Wands in a Tarot spread, this could be the time to put an end to whatever you are doing. Celebrate the past, but also prepare yourself for the new.

IV. The Eight of Wands Witches in a Tarot spread

In traditional Tarot, the Eight of Wands depicts eight wooden sticks that appear to be tossed in the air with a bright sky in the distance. This card often appears in your Tarot spread when your life has reached the stage of getting your hands to the business. If you have put a lot of effort into a project or a love affair, the Eight of Wands indicates a favorable ending is coming. You can expect things to end quickly, not as slow as it once was. The message of the Eight of Wands is especially powerful if your spread is about creativity as all the Wands indicate passion and creative power.

You may have a lot of unresolved issues when the Eight of Wands Witches Tarot appears. You may be frustrated or tired of waiting. This card is a sign that reminds you to be patient for a while longer. It is also possible that you have already done everything that you need to do and the current and next decisions will be made by someone else. When this card appears, there does not seem to be anything currently showing progress. But don’t try to force things because that will only backfire on you. Sometimes our actions depend on ourselves. Therefore, all you can do is do your best and wait. If you have done all that needs to be done, then be more patient.

The Chariot and the Eight of Wands Witches Tarot is an interesting pairing, it carries the message that the goal you have fought for will soon be achieved. Everything you dream of is completely achievable, as long as you work towards it. When the Wheel of the Year appears with the Eight of Wands, it indicates that your recent victory is probably merely temporary. To keep what you have, you need to fight hard. Otherwise, you will lose it forever.

In terms of work, you are probably waiting for decisions to be made by someone else. Chances are the results will be very positive, but don’t push people too hard before they are ready. Be patient. The stagnation will end soon. What will be, will be!

In terms of love, when the Eight of Wands Witches Tarot appears, it is likely that you are feeling ready for a new step forward in your current relationship (such as marriage). In fact, you don’t seem ready yet. You cannot get what you need by force. Distract yourself if necessary. The person you love may find you before you know it, giving you the key to his or her heart that you have been hoping for without much effort.

In terms of finances, there are many things related to your economic condition that are not going well right now. This is not a good time to invest unless you have seen and built a plan for the very long term. Everything is in constant flow. Save money and consider your spending habits. Patience is essential at this time.

In terms of health, you may be feeling anxious if you are waiting for medical results or information about a health issue that you are concerned about. Spend a lot of time thinking about the positives. Also, know that it will take more time for you to get the most out of your health. Encourage yourself, ask questions, talk to yourself about good things as much as you can. Your doctor still has many other patients to take care of. And you only have yourself. Be positive, everything will be fine!

In terms of spirituality, for most of us, moderation can be a difficult spiritual lesson to learn. However, when this card appears, this is a clear sign that calmness and patience are the two things you need to keep in mind. Meditation will help you now. But if you cannot sit still and meditate for twenty minutes, that is okay. Start with thirty seconds first. Peace will often calm the mind. Look for that feeling.

Like the upright Eight of Wands Witches Tarot, the reversed card generally advises you to be calm and steady. Life always has problems you cannot push or rush. Consider how you use your precious and limited energy resources to see if it is reasonable or not. Are you just waiting or are you moving forward to the best of your ability? You may be feeling guilty about something when you receive the Eight of Wands in reverse. Remember that nothing can change the past. The only good thing a mistake can make is a lesson to change the behavior of the future. Sometimes the best thing is to forgive yourself. But of course, your conscience still has its own reasons, so don’t ignore it completely.