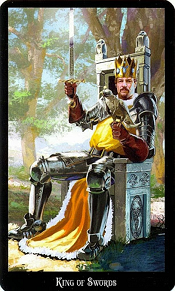 I. Keywords and corresponding associations to the King of Swords Witches Tarot

II. Meaning of the King of Swords Witches Tarot

The King of Swords Witches Tarot is a middle-aged man with brown hair, a mustache, and a beard. His eyes are dark and attentive. He has a serious and thoughtful expression as if he is pondering the matter at hand. The king sits on a throne carved with a falcon with interwoven motifs. Behind the throne, we can see many green trees, blue sky, and windy mountains. The King of Swords wears a golden crown with a pointed top of knowledge set with blue topaz. Topaz brings truth and forgiveness and helps illuminate your path. His armor is elegant and is used extensively to befit the king.

The King of Swords Witches Tarot shows his connection to the elemental air with a golden tunic and a golden robe edged with feathers. In his right hand, he holds the sword of justice that shines in the sunlight. He sits intently on the throne and looks as if he will move forward immediately and decisively if action is needed. In his other gloved hand, he holds a bald eagle. The falcon perches lightly on the king’s arm, waiting for the moment to hunt. The eagle symbolizes agility, precision, and ingenuity, and it motivates us to be ready to act at the right time for the greatest success.

III. Message of the King of Swords Witches Tarot

The King of Swords Witches Tarot is an authority figure. When this card appears in a Tarot spread, you need to know that your actions may need to be reevaluated. This is a card for rulers, leaders, and owners of justice. The King of Swords is related to the Emperor and Justice cards as he values ​​matters of right and wrong as well as integrity and personal honor. This card silently raises the question of the wisdom of your personal choices. He also announces that it is time to turn knowledge into action. This man sees the world very clearly, either in black or white. With him, there is no gray or neutral side. He is successful, skillful, discreet, and a scholar in general. He has a good business mind and is probably in the armed forces, a security guard, detective, or police officer.

The King of Swords Witches Tarot also represents a mature man with brown hair and dark eyes who values ​​his integrity above all. He relies heavily on common sense and believes only in what makes sense. Like the best kings of old, he is wise and a fair leader when it comes to judgment as he has to and is ready to defend his kingdom when necessary.

The lesson of the King of Swords Witches Tarot is to turn your knowledge into action while ensuring fairness and impartiality. The personality of the King of Swords is a combination of the positive energy between the Air element of the Sword suit and the dynamic, outgoing focus of the King. He is a man of wisdom who can absorb and work with all kinds of information. As a master of reason and logic, he analyzes any problem with ease. He can come up with solutions quickly and explain them transparently to others. In a chaotic situation, he solves problems and clears things up. He is eloquent and has a sharp mind. He is always honest and is expected to handle any situation fairly and admirably. When asking for a review, he can help make a fair and impartial decision. He is a man of integrity and lives by his highest ethical standards. He encourages others to follow his lead. Accordingly, they often live up to his guidelines and expectations.

In a Tarot spread, the King of Swords Witches Tarot asks you to act like him. For example, tell the truth, think of a solution, communicate well, or judge fairly. The King of Swords also represents a man or woman acting like him or an atmosphere of reason, honesty, and high standards. He tells you that his energy means something to you at this moment. Let yourself be inspired by the King of Swords in whatever form he appears in your life.

IV. The King of Swords Witches in a Tarot spread

The King of Swords Witches Tarot represents an intellectual with analytical thinking and moral character. He enjoys mental challenges, picks up issues quickly, and is adept at arguments. Because he is an open person, he often acts as a spokesman in groups and has the ability to exchange ideas with others very smoothly. The appearance of the King of Swords indicates that there will be a superior leader with good morals who will demand a high standard and resist fraud and deception. This superior is very straightforward, honest, fair, and objective.

The King of Swords Witches Tarot usually represents a strong, powerful, and opinionated man in your life. On the other hand, you may get caught up in thoughts about how things affect you personally if this card does not represent a man in your life. Consider how others feel before you act. Overall, the King of Swords is a sign of a very powerful energy source. You cannot change the mind of a man in your life or make him do what you want. You may need a major change in your behavior, thinking, and/or expectations. Don’t do anything beyond your reach.

In terms of work, there may be a man in your current work environment who acts or talks to you in a way that makes you uncomfortable. In fact, you may be just too sensitive. He just does his job. If you are looking for a job, the person who will hire you may be a man, but you will have to impress him to every point to get the job. Know how to set limits for yourself, don’t be too hasty to offend others.

In terms of love, the King of Swords Witches Tarot can imply a strong and opinionated man who can play some role in the relationship. If this man is the one who loves you, it means that you will have to accept him for what he is. Also, whether you are male or female, you will treat him best by developing and bringing out the most feminine aspect of you. However, do not suffer if you are abused. This man may be playing with his masculine nature and pushing his limits. Know how to protect yourself.

In terms of finance, the King of Swords Witches Tarot indicates that you need to understand and face the reality of your financial situation. Hiding will not solve anything. The card also is a call for you to be generous to others. You may not feel ready to be hospitable yet, but you should give the best effort. The rewards you receive will be more than the value you give.

In terms of health, if you are having unclear symptoms, be aware that your doctor, especially if he or she is a western medicine practitioner, will be able to recommend better testing methods. You should equip yourself with basic knowledge before entering the doctor’s room. Work well with your doctor or therapist’s treatments.

In terms of spirituality, in order for you to feel connected to establish spiritual beliefs, they must make sense to you. You can immerse yourself in spiritual awareness and practice by actively seeking out new sources of information and understanding. Let’s try new things, even a Tarot reading you do for yourself can sometimes help you get through. The practice of positive thinking is also helpful at this time.

The reversed King of Swords Witches Tarot usually represents a strong and opinionated man in your life. He is particularly not ready or comfortable with new ways of doing things, so it will be difficult to get him to become open to any kind of change. In general, the reversed King of Swords is a sign of a very strong energy source, whether the card represents a real man in real life or not. You will need to accept that you cannot always change anyone’s mind, so sometimes the best you can hope for is compromise. And forcing or becoming a bully to change their mind will not help at all, in fact, it can have side effects.