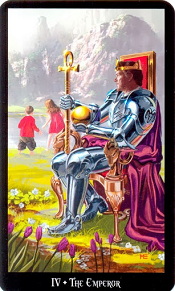 I. Keywords and corresponding associations to the Emperor Witches Tarot

The wise Emperor is watching his children play happily in the background. To demonstrate his strength, his right hand holds a staff with the word Ankh on the top. His left hand holds a globe. He wears a purple robe representing supreme power. The mountains behind him imply his strength and steadfastness.

The Emperor Witches Tarot is observing the scene and weighing his options and plans for the future. He was a wise, kind king and a loving father. This card has an astrological connection with Aries, symbolized by the carved sheep’s head on the armrest of the throne and the Aries symbol on the Emperor’s armor.

This is the masculinity of the deity and the aspect of God and the divine father. The purple tulips in the foreground represent royalty, and the tamarind bush blooming at his feet represents parental affection. Interestingly, the Emperor Witches Tarot has no weapons and instead uses his wisdom and experience to rule and keep the peace.

Message of the Emperor Witches Tarot

This Witches Tarot card can represent a family head or a magical group – someone who is responsible and fair. Just like what the Emperor is doing in this card, you should calmly observe the situation and carefully consider your options. This card can be your boss at work (regardless of gender), not just a husband or father.

The Emperor often appears in Tarot spreads when you are being considered for a promotion at the company, about to be elevated in a group, or even if you are about to take on a new job with better prospects. If you find yourself in the position of the breadwinner of your family or group and are a referee and peacekeeper, this card could represent your role in that group. It can symbolize your leadership in your family or at your workplace.

The image of The Emperor Witches Tarot says a lot about the attributes of this card. He was completely confident in his ability to control the power in his hands. He symbolizes structure, order, and law – the power required to counterbalance the free flow of abundance in The Empress. He advocated an orderly world in which trains were always on time, games were always governed by the rules, and officials were respected. In turbulent situations, The Emperor can show what the organization really needs. Tighten all sides and tie up the rebels. In the event that things are already out of control, he will surely find a way to bring everything back under control.

The Emperor Witches Tarot can symbolize power that comes unexpectedly or assumes power and control. He is a law-keeper, is often involved in matters related to the law, acts according to discipline and officials in every way. He can also stand alone in the role of a father, or represent a father in the role of a guide, protector, and breadwinner.

The Emperor Witches in a Tarot spread

The Emperor Witches Tarot shows us that reason overriding the heart is generally discouraged. However, in some cases, it is necessary, even welcome, and this is something we should pay attention to when this card appears. When the tough choices come, that is when you need to stay focused on the point and this stage will facilitate you to do so. Enjoy the assertiveness and confidence that this self-control and focus brings. Go ahead and do what you think is best. If you get yourself together, then you should have no problem getting the world and everything in it at your reach.

There is the appearance of an elderly man in your current situation. It could be a colleague, your father or someone like you. Maybe this person has special feelings for you. Don’t dismiss this person just because of age. You may feel that this person has the legal authority over everything and it can make you feel unbearably stifled, but that person is just trying to show you that rules are made for a reason and the law has its place – it will make you better. Above all, this person teaches you that the benefits of logic and structure will outweigh the momentary desires and emotions.

The Emperor’s strongest combination is with the Temperance card. This pair indicates a great deal of self-control and high willpower. When the Emperor Witches Tarot appears with the Shadow Side, it indicates that someone in your life is abusing power over you, and if you don’t fix that problem, it will lead to a crisis. When combined with the Four of Cups, the Emperor depicts a short-sighted state, and it is recommended that you try to approach the problem from a different angle.

In the position of indicating the past, The Emperor Witches Tarot represents a certain event in which an authority figure plays an important role. That situation has a direct effect on the dilemma of the querent. In the present position, the Emperor is interpreted that the querent has reached a stage of holding some important position, or is currently under the influence of an authority figure. If this case is the querent, then it means that they have ascended to a leadership position, or that they have an important position in a romantic/personal relationship. It is good to be a prop for others, as well as a person to be consulted in a relationship, but you need to decide if your role is good for everyone involved. In the future position, this is a sign that the querent will eventually have to lead. This is an indication that soon you will be the main decision-maker.

In terms of work, everything is going well and your efforts are not ignored at all. Be organized, get the job done, and think logically. Your results will be outstanding. If you are looking for a job, this is the time to be objective and steady. Go out and see yourself from someone else’s point of view, answer the question why should they hire you? You will most likely find a job if you are logical and persistent at this time.

In terms of love, maybe you will fall in love with someone older than your age. This person may be attracted to discipline, logic, and organization. The attraction may not come from both sides at first, but if you are patient and persistent, chances are this relationship will flourish.

In terms of finances, The Emperor Witches Tarot shows you need discipline, logic, and a better arrangement of your finances. What do you focus on as life develops? Do you appreciate the money you make? Do you know how many you have? Where do they go? Don’t focus on what is missing. Focus on what you have and be the best housekeeper for your capital.

In terms of health, you have the right to be a healthy person. Be sure to be scientific with what you do for your body. Discipline and training will be very helpful. For example, if you are stuck with a health problem, write down your symptoms, get tested, and see what lifestyle factors are causing it. Consider adjusting your diet to see what kind of meals your body isn’t responding to.

In terms of spirituality, take time for yourself to satisfy your spiritual development needs. Don’t just focus on aspects such as logic, reason, order, let other information be considered. Logic can lead you to the spirit world, if you allow it. Reflection and meditation (which is very disciplined) will be easy for you if you put in the time and effort.

The reversed Emperor Witches Tarot tells you that you are letting your heart take over and even going against what reason and logic are telling you. All in all, this is not a bad thing, but ideally, you have to balance the two. Using both mind and heart, that is what this reversed card means. You may find it difficult and distracting now, as well as having a hard time maintaining sustained focus.

The reversed Emperor means that concentration is essential in the present moment. When The Emperor is in reverse, it looks like a dark-haired man is leading you in the wrong direction. Ignore appearances and consider what that person really brings to you. See which parts are really helpful to follow and just ignore the rest.