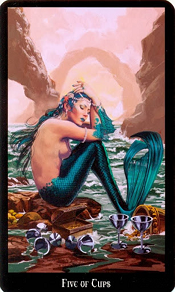 I. Keywords and corresponding associations to the Five of Cups Witches Tarot

II. Meaning of the Five of Cups Witches Tarot

On the Five of Cups Witches Tarot card, there is a beautiful creature of the water element which is the mermaid sitting on the ledge of the shore. She is sad, dangerous, intense, and obviously bored with her world. Her hair and scales are dark blue, hard, and shiny. The sea surface seems to capture the mermaid’s mood so it is also cloudy and has a dark cyan-green color. The sponge is hitting the rock behind her, showing her insecurity. All around her is a collection of treasures from the ocean. The gold coins are abandoned, and the pearl moon crown does not make her happy either.

There are five silver cups in front of her of which two are standing straight while three are falling and pouring the water out back into the sea. The mermaid looks sorrowful as if jewels no longer make her happy. Like the folktale of the mermaid who wants to go ashore and leaves her kingdom behind, this mermaid turns her back on the sea and yearns for what she cannot have.

III. Message of the Five of Cups Witches Tarot

The Five of Cups Witches Tarot represents dissatisfaction, pessimism, and longing for something that you can never get. Of the five cups introduced in this card, two are still full of water. What is interesting to note is that most people only realize that three cups have been emptied. When this card appears in a Tarot spread, it is a warning that boredom, mild depression, and mood swings are invading your life. You are expecting something you cannot have or things that will not be good for you in the long run. You may feel terrible right now. Likewise, everything you used to be satisfied with now seems boring to you. However, it is time to stop being miserable and take a fresh look around yourself. You still have many choices and opportunities. Make use of the water element, wash away sadness, and find solace and peace.

The Five of Cups Witches Tarot is a card of loss. On this card, we see a figure of grief. The image of this mermaid is so strong that it overwhelms the other details in the card and it is difficult to see her far side. The Five of Cups refers to that time when the pain of a loss becomes most painful. This mermaid just looks at the upside-down cups in front of her. Currently, she cannot notice that there are still two cups still standing. Later, when her soul has been completely healed, she will be able to see all that remains.

In a spread, the Five of Cups Witches Tarot brings a warning message about the possibility of a loss and the emotions involved – sadness, regret, rejection. The loss can be either enormous or petty. It can also be either tangible (money, ownership, relationships, work) or intangible (dreams, opportunities, leads, prestige). You may already know who or what this card represents, but if not, it can serve as a sign to help you avoid the loss or at least minimize its consequences.

You may feel discouraged by this card, but it still has a positive side. Every loss opens up new possibilities for growth because it initiates a change. Loss hurts because human emotions are resistant to change. No matter how much we intellectually accept it, we must conform to the natural flow of life. If that current separates us from what we love, our emotions will reject it immediately.

In a story from Zen Flesh, Zen Bones, the monk Hakuin is falsely accused of being the father of a child. His reputation in the village was ruined, but he accepted this loss and took good care of the child for a year. Suddenly, the real father appears. Then Hakuin is willing to let the child reunite with his parents, accepting the loss once again. We are not Zen masters so we may not accept such events easily, but we can learn from this story. The more we struggle to keep what is gone, the more we suffer.

IV. The Five of Cups Witches in a Tarot spread

Despite belonging in the Minor Arcana, the Five of Cups Witches Tarot is an extremely complex card. The card depicts five cups of which three are lying around while the other two are still standing. This card confirms loss, grief, and despair, but also indicates that there will be light at the end of the tunnel. The three spilled cups are related to how you feel about the current situation. No matter how tumultuous the course of life is, it is difficult to accept that it is impossible to fix what has happened. You certainly cannot refill the overflowing cups on the ground. Two cups that are still intact signify that this life is not so bad even if some part of this life has changed.

The Five of Cups Witches Tarot reminds us that what we pay most attention to will have a lot of influence on the quality of our lives. It also refers to the extent and manner in which these effects of mindfulness take place on ourselves. Which issue would you choose to focus on?

In most Tarot decks, most of the visual descriptions on each card suggest very clear interpretations. However, for this card, the matter is not so simple. Usually, the Five of Cups Witches Tarot shows a sad character looking down at the water, surrounded by five cups. Three cups are falling while the other two are still standing upright. The implication of this image is very clear. Will you choose to stay sad over the unfortunate things that have happened or will you focus on what you still have and spend your time and energy moving forward? The point here is to consider what you are focusing on and always make sure that your choice of focus directs you to what is best for you.

When the Five of Cups Witches Tarot is accompanied by the Emperor or the Empress, there may be a change in your relationship with your parents or seniors. This often happens with young people, especially when they have just graduated from school or are planning to move out on their own. When it appears with the Lovers, there can be a big rift in your relationship. A terrible argument can make both parties feel like the relationship is as dead as the rose garden of the past. The Strength card is expected to appear alongside, as it emphasizes the positive aspects of the Five of Cups. Even if you are going through a tough time, you have the ability to get through it all. That is the message when those two cards combine.

In terms of work, if you are in the process of finding a job, try to be patient. Keep in mind that recruiters often implement the process of applications, resumes, and the like slowly. When this card appears, it can be an indication that you are most likely choosing the wrong job. Take a look at what you want to do and take steps towards making it happen.

In terms of love, your relationship may have just ended or may be nearing its end. You need to realize that you don’t lose everything. You may not be ready to start a new relationship yet, so give yourself more time and space than you currently have. There will come a day when you realize that the reason your current relationship has ended or is coming to an end is to help you get what you really want, which is to find and keep an actual suitable relationship for you.

In terms of finances, worrying too much about money matters can actually have the opposite effect of what you are trying to achieve. It can also affect your financial well-being. To address this concern, you need to be more generous. You may not be as inadequate as you think you are. Try giving something away or making a small donation to somewhere you trust.

In terms of health, it is paramount that you maintain a positive attitude at all times. If you just cannot get over the memories of bad things others did to you or let go of what happened in your past, now is the time to seek help in dealing with it. Solve those problems before you cause hurtful things by locking yourself in the dark past. The past is gone. Focus on the present and the future.

In terms of spirituality, this is where forgiveness is necessary. You don’t forgive others for their own good or because they “deserve” forgiveness, but you need to do it for your own sake. The reason is for the sake of repressing anger and the pain in your heart is extremely harmful and bad for yourself. Not only just that, but while you still have time to be angry and irritated, the person you are angry with is most likely in a pretty good mood. So now is the time to let go of the things that are still lingering in your mind and soul.

The Five of Cups Witches Tarot in reverse implies that there is a high chance that your life will see many new prospects as well as new projects. It is a time for hope and to reach out to others if you are in need of something from them, such as a need for work, attention, care, or anything else. Have faith in yourself and trust that your needs will be met. When you draw the reversed Five of Cups, you are most likely going through a difficult time. The good news is that your recovery from this period seems to be going pretty well. Keep moving forward, don’t let yourself be “stuck” with the past or what you have done.