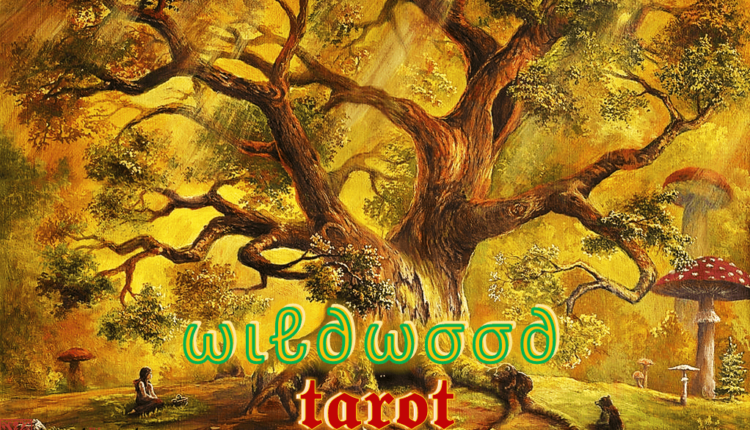 I. Origin of the Wildwood Tarot deck

II. Author and inspiration of the Wildwood Tarot deck

Based on the four-season melodies of nature and features from ancient festivals, Wildwood Tarot was released by John Matthews, Mark Ryan, inspired by pre-Celtic myths and Mysterious anecdotes about the gods (shaman). The deck takes you to a beautiful world that is home to classical forest-based prototypes, including humans, archers, oaks, etc., and a detailed interpretation system that links specific features of these prototypes with the traditional Rider-Waite Smith system.

Wildwood Tarot deck is for contemplation, meditation, and reference. The pagan-like nature imagery system of artist Will Worthington – co-author of The Druidcraft Tarot – will connect you with a world that seems to have been lost for a long time – where we can understand who we are when we are in harmony with that world. This is a deck for those who love the nature/ pagan theme and is suitable for all Tarot readers.

The Wildwood Tarot Handbook introduces us to traditional druid prototypes including Green Man, Green Woman, Archer, and Blasted Oak; it also explains how to use the cards as a system of meditation, fortune-telling, or ritual. The deep knowledge of author John Mathews and the attractive drawing of the artist Will Worthington has created a masterpiece called Wildwood Tarot deck. This deck is inspired by the Wheel of the Year and Celtic myths to highlight the message that the mountains bring to humans.

Each card is a fascinating treasure of knowledge about the culture, philosophy, element, and meaning of each timeline on the wheel of the year, which requires a certain understanding of it. Changing the names of the cards in this deck as if the author encourages us to discover the profound meaning of the card whether you are a beginner or an experienced Tarot reader. The Wildwood Tarot begins with the image of The Wanderer (The Fool) preparing to step on the rainbow, which is a metaphor for our journey into the world of Wildwood.

In the opening of “Return To The Green”, Mark Ryan mentioned the Greenwood Tarot deck, the predecessor to the Wildwood Tarot deck. Mark noted that all the hidden things from the “other world” in Greenwood were cherished and applied by thousands of people. They want to know the occult prototypes that exist in Wildwood and the system of Wheel of the Year. Due to no more releases in recent years, Wildwood Tarot is gradually taking over the position of its predecessor. The highlight of this deck is ecology, ancient perspectives, legends about forests in Western terms.

Wildwood Tarot deck and the guidebook are arranged in a “drawer” box. The image on the cover of the book is from the Hooded Man (The Hermit). The cover of the box is an image of Ancestor (Hierophant), a very majestic figure that exudes the appearance of a snow deer and evergreen leaves. This image creates a solemn meaning for the deck. There are two compartments inside the box for arranging cards and the book, with a small finger-sized hole that makes it easy to take the deck out of the box.

The cards are presented in a book with a black and white scan, a brief summary of the position of each card on the wheel of the year, card description, the meaning, the focus and the emphasis, called “Roots and Branches” listing the keywords. (Note: Court cards have no description, and Pip cards have no keywords). The introduction page for each suit includes a quote, the position on the wheel, elemental attributes, and combinations (keywords/qualities for each suit).

Instructions on how to read Wildwood Tarot deck include a three-card spread (The Pathway), a seven-card spread (The Bow), and an eight-card spread (The World Tree). After the spread, the author has included a visual part (The Hermit’s Cave). At the end of the book is a blank page for taking notes.

Cards are 3 x 4 ¾ inches (~ 7.6 x 12 cm) in size. The back of the card is black, with a slight white border of ¼ inch (~ 0.6 cm), each corner has a small white flower, the left-right border has copyright notes. With such an asymmetrical design, it is impossible to know whether the drawn card is upright or reversed. The front of the card has the same white border. The card name is printed in black ink at the bottom of the card: the Major Arcana cards show the number and name, the Pips cards show the number and suit name, with the card’s keywords. Court Cards show the name, suit name, and keywords.

IV. The structure of the Wildwood Tarot deck

The Major Arcana of Wildwood Tarot

In his introduction, Mark Ryan addresses the gender issue in the deck. The first thing to mention is that each of us has two qualities – masculinity and femininity. The gender perception of the prototypes being masculine or feminine is largely due to the author’s intentions. However, there are some exceptions, such as The Moon is described as feminine and the Sun is masculine.

Ryan also shows how to ask questions (which he has divided into how to build questions, how to choose a Tarot spread and explain how to spread cards), destiny and Tarot, and the basis for Wheel of the Year. He takes us through four seasons, with four corresponding suits and cards, one by one.

The four suits of Wildwood Tarot are:

The Court cards are King, Queen, Knight, and Page.

Position on The Wheel: Summer, from Beltane day through the summer solstice to Lammas day.

Keywords and expansions: Creative, Develop, Reckless, Science, Pursuing philosophy and mystery, Good ability is nurtured by the will.

I know that I have savored the hot taste of life

Lifting green cups and gold at the great feast.

Just for a small and a forgotten time

I have had full in my eyes from off my girl

Position on The Wheel: The period from Lammas day through the autumnal equinox to Samhain day.

“The intuitive mind is a sacred gift and the rational mind is a faithful servant. We have created a society that honors the servant and has forgotten the gift.” – Albert Einstein

Position on The Wheel: Spring, the period from Imboli day through the spring equinox to the day of Beltane.

“I learned this, at least, by my experiment: that if one advances confidently in the direction of his dreams, and endeavors to live the life which he has imagined, he will meet with a success unexpected in common hours.” – Henry David Thoreau

Position on The Wheel: Winter, the period from Samhain day through winter solstice to Imboli day.

Wildwood Tarot deck really is a deck of cards with artistic nuances that give a sense of mystery, with strong support from the natural world, and consistency of concept throughout the cards. The art style of Will Worthington in this deck is far different from the forerunner of this deck – Greenwood Tarot – which was sketched by Chesca Potter. The two stand on two different artistic viewpoints, carrying great powers, but at some point, one side will stop and reestablish.

Wildwood Tarot deck reveals all-natural animations (green) as well as other religious orientations. The stories throughout this deck will be easily readable by the Tarot reader at all levels and can be applied to all ages and all walks of life.