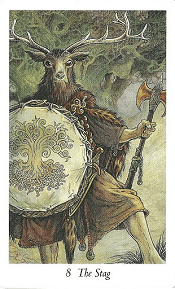 I. The position of The Stag Wildwood Tarot on the Wheel of the Year

The Stag shares the spring equinox – March 21 with The Archer. He was intimately attached to the moment of sunrise and the element of Air. The Stag is a metaphorical image for the treasure of knowledge in the universe, where the energy of creativity awakens every human soul.

II. The Description of The Stag Wildwood Tarot

The Stag Wildwood is the king and guardian of the forest. He is half-human and half-animal, surrounded by greenery. His gaze is very steady and calm. He holds a shiny hatchet and a shield in his hand. His horn stands out on the forest background and almost reached the sky.

The Stad shows our connection to the universe and the presence of all organic life on this planet. The hatchet is a symbolic image of the human will to the environment. In order for the environment to change more positively, we need not only more effective actions but also our responsibility to nature. On the shield, the picture of a great Oak tree reminds us that we must preserve and protect natural resources.

III. The Meaning of The Stag Wildwood Tarot

Forgiveness or giving a reward doesn’t exist here. Human demands are unrealistic to nature. What goes around comes around. Only the right and generous action will bring completeness and peace. Greed and desire to take revenge only bring bitterness and delusion. The ecosystem on the planet will maintain its balance. justice is always exercised in tolerance, but it cannot be reversed by anything.

We are the guests of the earth, not its owner. And like spoiled children at the table invited by a generous, tolerant owner, we behave terribly, destroying the intimate atmosphere of others. Unrestrained greed and selfishness have seriously damaged the ecosystem. The balance and interdependent link between nature and human beings is the key factor; If the balance is marred by any wrongdoing or heartlessness, nature will automatically have a response, and a new equilibrium will surely be established.

On a personal level, this Wildwood Tarot card deals with obsessive crimes, misdeeds, or unconscious suffering of injustice. It shows the law of cause and effect, justice; which are ingrained in our perception, help us distinguish right from wrong, and unconditionally believe that justice will be served.

On a worldwide scale, the card shows the serious destruction of rainforests, causing a negative impact on weather and climate; polluting the seas, poisoning the species, making them unable to be food anymore. Someday, not far in the future, our venerable host – Earth, will have no choice but to permanently expel us from the banquet of all species.

Whether at our individual or community level, we are all responsible for our actions and aware of their consequences.

IV. The guideline of The Stag Wildwood Tarot

On a personal level, a few adjustments and interactions have taken place. The keyword here is responsibility. We must constantly review the morals and laws of society because they can change as society’s perspectives and knowledge change. Whether based on ethical or political basis, we unconsciously recognize the need for a cognitive adjustment. This is a time to celebrate fairness as it welcomes the beginning of spring with the fire of creativity. Face the challenges ahead honestly and straightforwardly. Believe in the right and appropriate actions.

V. Keywords and extensions of The Stag Wildwood Tarot

The supreme power of the holy land, The balance of the universe, The holy land and its king are one, Spiritual adjustment, Cosmic knowledge, Judgement.

Justice Linestrider reflects your search for truth and represents the results of your actions and the consequences of your decisions. Justice in a Tarot spread shows how long it takes to make a decision.

The Adjustment Thoth Tarot card contains different topics. It represents objective and clear perception, consciousness, making judgments judiciously, immortality, balance, and fairness. It also shows that we will get what we deserve.