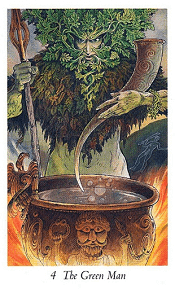 I. The position of The Green Man Wildwood Tarot on the Wheel of the Year

The Green Man stands next to The Green Women at the solstice point. This is the warmest time of the year as the sun being at its peak in the sky. Fire is the element of this Wildwood Tarot card.

II. The Description of The Green Man Wildwood Tarot

There was a fiery and challenging look on The Green Man’s face. The golden sunlight of summer shined brightly, scorching the leaves on his radiant face, then touching the holy ground. In front of him, there is a cauldron that symbolizes generous nature, used to store and preserve the essential energy for creativity and stability. It represents the throne of royalty and is currently empty. The Green Man protects it with its powerful spear and horn. He waits for the presence of the new king, who will replace his position as the guardian of the holy land.

III. The Meaning of The Green Man Wildwood Tarot

The Green Man is a symbol of a glowing heart where the masculine aspect of nature presents. He is one of the oldest figures, showing the connection between human beings and nature. His face has been on the rocks of temples and churches for thousands of centuries. Even on the blurred and cold domes of the Christian churches, his face could be seen, slowly looking down and mocking anyone below. His image is also metaphorical in symbols such as The Green Knight, Jack in The Green, or Robin Hood. His face is covered by leaves, peering out from the darkest, most fertile place of the wood to challenge you to respect and indulge in the pleasures of the natural world. He can be as apprehensive and intimidating as when he protects wild animals. Animals recognize his voice and presence because he is part of them. He is the spirit of holy land that defends the deep and lasting connection between nature and animals.

The symbol on the cauldron under the watchful but joyful eyes is called the giant Cerne Abbas. He is worshiped for his noble personality and protective power. As a giant, Cerne Abbas possesses profound powers and consistency that is rarely seen.

The Green Man Wildwood protects the holy land strictly and carefully. His warning of respect for nature and animals must be given great attention. For those who take advantage of the generosity of nature, he can impose very tough and terrible punishments. However, he possesses a generous heart and a warm, cheerful soul. Those who could see through the thick layers of ferns and huddled together in the wood could see his face. His heart is always open and generous, full of the warm sunshine of the blazing summer.

IV. The guideline of The Green Man Wildwood Tarot

The Green Man is extremely generous when he bestows abundant creative energy. He will bring you to a new level of confidence, dynamism, and assertiveness. This is the time when you give and receive natural energy flows in life, from the inside and the outside. Be prepared for the search for newer and greater sources of motivation to begin projects and relationships. Or even live a new life and perfect this world. Now is the time to experience the pinnacle of life. Let’s enjoy it!

V. Keywords and extensions of The Green Man Wildwood Tarot

Great father, The old man of nature, The king and his territory are one, The secret man of the Holy Oaktree, Pendragon’s heart, Saint Dagda.

The Emperor Thoth Tarot card shows a majestic and mature character who dressed in stately costume and fitted with two giant male sheep heads that symbolize the two pillars or the back of the crystal throne.