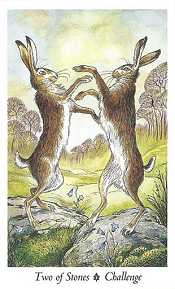 I. The Description of Two of Stones Wildwood Tarot

On the card is an image of two low and eroded rocks placed on either side of the canopy. On each rock is a hare. They are fighting fiercely with each other. The energy waves emanating from the two hares as their own strength and influence are being spread.

II. The Meaning of Two of Stones Wildwood Tarot

The female hare fight for dominance and territorial sovereignty for reproduction. After unleashing restrained energies to gain autonomy, status can be challenged again or another struggle was initiated by other opponents. Learning how to handle adversity and competition with fairness and integrity is an essential skill that can be seen as an advantage.

III. The interpretation of Two of Stones Wildwood Tarot

Two hares rise up on their hind legs to box in the pale dawn of an early spring day – the Queen of Wands and her challenger. So many hinges upon winning in this confrontation – they fight for supremacy, for breeding rights, for territory.

Many of the challenges and rivalries between peers or colleagues arise from danger and subconscious issues. Usually, they are all transient emotions rather than intentional malice or personal malice – things that lead to distrust of your opponent and destroy all your efforts. In the modern material world, where power and wealth are highly valued, it is often a perceived position, or an expression of jealousy, rather than the true nature of the situation.

You can preserve the land and defend your status throughout the period of autonomy by maintaining pure and positive motivation while keeping your sincerity and integrity. That is the foundation of equity, progress, and enduring matter. Some contests and really different opinions can be very rich or even helpful. Let’s absolutely discern and focus on goals, always steadfast in adhering to a code of ethics when running a plan or project.

IV. The guideline of Two of Stones Wildwood Tarot

Two of Stones from the Wildwood Tarot shows two dueling hares, with the keyword “Challenge”. It is a different emphasis – rather than two things being in balance, they are fighting each other for dominance. But the hares are perfectly matched, almost mirroring each other, and neither one has the upper hand. As new challenges come into our lives, they shoulder for attention with the many other things we are dealing with and at times it can feel like we are battling ourselves.

Stones in the Wildwood Tarot is associate with Pentacles in the Rider-Waite Tarot. Pentacles are another word for money, so think of paid jobs, trading, home. It is also practical matters, the act of doing and in this case, working with others, or trying to in physical terms. It is also about balancing the two aspects of oneself, for us all contain male and female tendencies either in approach to tasks or to our mental activity. This could also mean that you need to be careful with balancing the finances and with yourself.

The message in this card is to try to enjoy that battle and find that buzz. The hares in the picture are not dueling to the death but fighting out the natural order of things, working out how the hierarchy is going to sit. It would be impossible to give absolutely equal attention to every aspect of our lives – balance is achieved when everything is getting enough.

V. Keywords and extensions of Two of Stones Wildwood Tarot

The earth element, Agreement, Balance, Distractions, Relationships, Neglect, The ability to balance one’s temper, Have the courage to stand your ground.