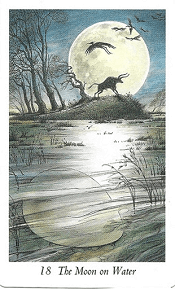 I. The position of The Moon on Water Wildwood Tarot on the Wheel of the Year

The Moon on Water is located at the center of The Wheel, at the winter solstice – December 21. The card is tied to the image of the dark sun. The element of the card is Earth. The Moon on Water holds the door to the soul, the mysterious place where ideas and aspirations change from purest thoughts to objective reality.

II. The Description of The Moon on Water Wildwood Tarot

A full moon is rising over the pristine swamp, showing the winter sky at night. The swampy area is adorned with thick reeds along with the humus-rich waters. A giant egg is immersed in a nutrient-rich lake, symbolizing potential energy and creative power. Bare trees reach the sky and await the return of spring with flocks of crows and storks flying around in the sky. A European bison is moving through the holy land.

The moon is the closest companion to us in the solar system. It affects waves, tides, and the circulation of life on earth. But the moon has more power than that. In the wild world of the Wildwood Tarot, the moon is a sacred, mysterious light. It lights up the darkness and fills the void. Therefore, the moon is also a symbol of unconscious understanding.

III. The Meaning of The Moon on Water Wildwood Tarot

In The Moon on Water Wildwood, there is no visible pathway for wanderers, only the moon’s light illuminates the path on the holy land. We stand on the edge of a swamp filled with water – which represents the primitive state that holds all the potential creative energy in each person’s soul. We are drawn to the boundary area where the moon meets the Earth on barren trees. The flight of sacred storks represents the union of our ancestral souls with that of the earth.

In front of us, there is the primitive egg, being conceived in the water, waiting for creative stimuli to start the life cycle. The horn of the bison symbolizes the new moon and the crescent moon. The shape of the horn and the head looks like the womb and women’s fallopian tube. In Mithraic and Druidic religions, the bison is a sacrifice in the middle of winter, representing the proliferation of new life in the deadly winter. The stork is a sacred bird that represents fertility. It has another name in Ireland: “Siothlagh a Bhoga” or “Sheelagh of the boglands” – the slang for women who are promiscuous. Although the body is a bit slender and weak, the stork is a metaphor for the mysteries of reincarnation, bringing powerful insights into life.

The Moon on Water illustrates the first steps that go beyond everyday awareness into the dimension of creativity. The card also contains aspects of the dark moon: fertility, physiological ability, and initiation, as well as the irrational fear of dark creatures such as fairies, demons, etc.

IV. The guideline of The Moon on Water Wildwood Tarot

The Moon on Water heralds the moment of inner and cognitive transformation. The transformation can hide in a seemingly random situation in human minds and emotions. However, there’s a voice that has been whispering in you about this for a long time. Now, your soul is bringing the core symbols of the human subconscious into the real world. More specifically, it can occur in the form of a desire to investigate or study an ideological, philosophical, or spiritual pursuit. Or through sexual energies and experience a strong spiritual connection with a companion, to understand your secret desires. From here, you may struggle with perceptions not only about yourself but also about the universe.

V. Keywords and extensions of The Moon on Water Wildwood Tarot

The dark of the moon, The rebirth, The static point of the potential, Aisle of The Moon on The Water, The gate to the soul, Waves of emotions and perceptions, The original power of awareness and enlightenment.

The Moon Deviant Moon Tarot card warns of lies, dishonesty, confusion, threatening situations, self-deceit and fantasies away from reality. Some of these meanings have already existed in the astrological relationship

The Moon Linestrider is a mysterious and iconic card related to the Pisces zodiac. This card represents illusion, intuition, and unconsciousness. Moon can appear in a spread when you are feeling uncertain or lost.