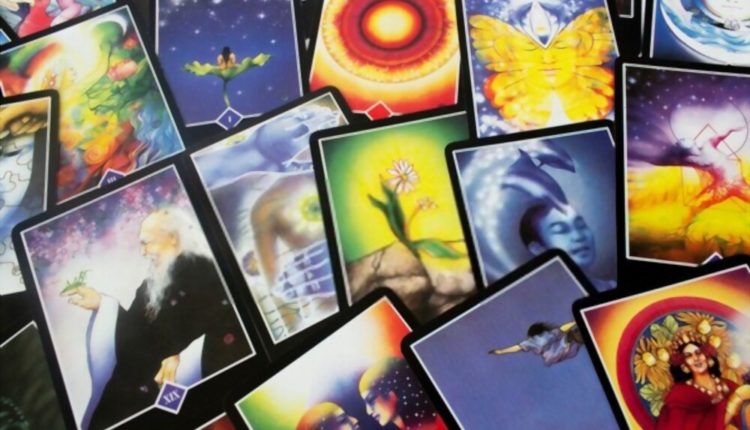 I. Origin of the Osho Zen Tarot deck

The Osho Zen Tarot deck, illustrated by Ma Deva Padma (1947), is one of the decks considered to be quite challenging to perceive and interpret. However, Tarot readers will feel somewhat answered if carefully studying the accompanying manual. Osho Zen Tarot deck is based on the teachings of the late Zen master Osho (December 11, 1931 – January 19, 1990), whose real name is Chandra Mohan Jain, also known as Acharya Rajneesh from the 1960s onwards, after which he called himself Bhagwan Shree Rajneesh in the 1970s and 1980s, and eventually took the name Osho in 1989. Throughout his lifetime, he was seen as a mystic teacher, guru, and spiritual master. Osho left a huge number of works with hundreds of books and countless lectures, helping people understand clearly the truth, clarifying things that no one has ever touched before.

Osho argued that meditation is not only a practice but a state of awareness maintained in each moment – an overall awareness that awakens individuals from the sleep of mechanical response controlled by belief and expectation. He applied Western psychotherapy in the stages of preparation for meditation to make people aware of their own mental and emotional patterns.

Therefore, the meaning of the cards gives you the feeling of being taught, and often the profound statements about specific concepts or actions. But not everyone agrees with these concepts.

II. Structure and meaning of the Osho Zen Tarot deck

This deck is designed in a liberal style in order to attain enlightenment through meditation. While traditional Tarot deck, which is Rider-Waite, aims to satisfy the desire to search for the past and the future and answers questions like “What will happen in the future?”, “What will my health and children look like?”, or “What if I choose one option over the other?”, etc, Osho Zen Tarot focuses on the task of helping readers and querents enhance their perception of the present. The similarity between the Osho Zen Tarot and the Rider-Waite Tarot is that it is not intended to make predictions. It is a system based on the enlightenment of Zen, which helps us to examine external events to clarify what is happening inside us. Additionally, impressive images help you blend in with your sensitivity, intuition, compassion, creativity, acceptance, and personality.

The Osho Zen Tarot consists of 79 cards: 78 cards as usual and the Master card added, each containing a picture of the card and an accompanying reading. This section includes a quotation from Osho’s works and a paraphrase of the author illustrating this deck.

Overall, it represents the ultimate transcendence of the individual ego in enlightenment and the illustrated 176-page manual. Besides, each Osho Zen Tarot card has an explanation of the illustration as well as insight into its meaning. The manual also provides some spreadsheets and a glossary of symbols.

Somewhat helpful to the Tarot readers, the accompanying manual describes in great detail the cards as well as their meaning in common sense. These descriptions lead Tarot readers to immerse in the card and interpret the images in the card with feeling and reflection. This approach can be found to be a big help when reading cards and discovering what card images are trying to convey. Usually, in the manual, you will find a story about Buddha, more perfectly describing the meaning of the card, and leaving some information about the Zen culture of Osho and the life of Buddha.

Osho Zen Tarot deck itself is a brilliant piece of art, paired with 79 cards. It is also one of the few Tarot decks purchased mainly because of its high artistry. Still, the art used in the deck is quite odd, from the use of watercolors to featured geometric designs.

The cards in the Major Arcana are still in the traditional order and meaning with Zen-themed visual representation. However, the card name was changed as follows:

The additional card in the Major Arcana of Osho Zen Tarot – the Master – shows what people can become when they escape the eternal cycle of birth and death (the journey from Fool to Completion) and find the Enlightenment. It is not surprising that the Master card is depicted with a portrait of Zen master Osho. Besides, this Master card, based on the meaning shared by the author, is not the master above others but the image of a master of himself, who mastered his own mind and is unaffected or enslaved by the outside world. The master does not teach us anything but only a reflection for us to look into it and realize ourselves. Only when understanding, one can fully comprehend Osho Zen Tarot. If intentionally eliminated this card, this deck would immediately lose part of its meaning.

The new name of the Major card will be quite unusual if you do not look through the image. It is the images in this card that convey the meaning and complement the name of cards in a great way. Images used are very sacred and anecdotally express their meanings. For example, the card Innocence (Sun) depicts a silver-haired man smiling wittily with a deep gaze on the green mantis perched on his index finger. This image is like touching the soul, and people often find themselves through such cards.

The Minor Arcana cards of Osho Zen Tarot are significantly changed. The card name, for example, the Five of Swords, is not shown on the card, but instead is a keyword that conveys meaning on it.

The four suits: Fire, Water, Clouds, and Rainbow, are equivalent to Wands, Cups, Swords, and Pentacles. On the Minor cards, you can see the card number according to the color of the suit in a small diamond shape: Gray – Clouds, Red – Fire, Blue – Water, and Seven Colors – Rainbows. Just like the Majors cards, the images on the Minor cards are conveyed excellently, both anecdotally and symbolically. But you will only contemplate very little if not associated with the keyword on the card.

For example, the Eight of Waters, with the keyword “Letting go – Give” – describing droplets of water remaining on the foliage are falling down on the lake.

Court cards also have no name. Instead, inside the colored diamond shape representing the suit, is an arrow pointing to one of the four main directions: North (◄) is King, East (▲) is Knight, South (►) is Queen, and West (▼) is Page. It will be a little difficult to get used to at first, but Court cards are greatly supplemented with keywords on it. Unexpectedly, in the Osho Zen Tarot deck, Court cards are depicted without actual human figures as they are more about conveying concepts than talking about people. For more information, the back of the cards is stunning in a very mundane and oriental way. With the back design, Tarot readers can easily know whether the card is in reverse or upright.

III. Which readers will Osho Zen Tarot be suitable for?

The Osho Zen Tarot deck focuses on the task of helping the Tarot readers improve their current understanding. It suggests that the events that occur in the outside world merely reflect our thoughts and feelings, even though we may not truly comprehend our own feelings and thoughts. Therefore, what we need to do is not to pay attention to what happens outside, but instead, seek to clarify our insights and thoughts from the bottom of our hearts.

The conditions and mental states depicted in non-traditional modern visual cards are also the clearest descriptions of transformation and transition. These images are also the life experiences that people approach in life, from the beautiful to the ridiculous and the mundane.

Briefly, the Osho Zen Tarot is not a Tarot deck for beginners or those who only feel a little philosophical value of Osho or Zen Buddhism. However, this is a very attractive deck of cards and is for enthusiasts who collect Tarot decks at a high level. Reading these cards can be challenging at first, especially for purifying, healing, and strengthening the spirit with your standard Tarot spreads.

And finally, if you are a person who has struggled and confused with standard Tarot decks, and felt they are too scary or negative, are more concerned with the present than the future, love meditation-related topics, want to have an enlightened Zen teacher to guide wise things, choose Osho Zen Tarot.

The most common and simple spread of Osho Zen Tarot is the Diamond spread, which seems to also reflect the intent of this deck. This spread requires the querent to draw 5 cards and place them in a diamond shape (at first glance, it is easily related to a cross).

If digging a little deeper, applying Buddhist knowledge to interpret, it can be said that the first to the fourth card are the four types of conditions according to the Collection of Long Discourses: causal condition (the condition of causes and also includes all causes of mutual dependence), immediately preceding condition (talking about impermanent consciousness that follows one another), objective condition (the conditions of treaties, the conditions outside of us), fundamental condition (is a condition to help the previous conditions develop), while the fifth card is the possible result of those conditions, require to use the mind from which to reflect and then realize what needed to do.

There are many reasons to say that Osho Zen Tarot is not a traditional Tarot deck, it is more like a non-standard one, or rather, as an Oracle deck, except that in spreading cards, cards in the Major Arcana still hold an important role than the cards in the Minor Arcana. Interestingly, there are quite a few people who are engaged in approaching this Tarot deck according to this aspect. Most people who have owned this deck want to interpret their cards more intuitively. The reason for this is probably because the cards in the Osho Zen Tarot deck are highly intuitive, and straighten things as they are, and so it is more positive, considers everything with wisdom and compassion, doesn’t accept the boundary, and doesn’t admit the fiction. That is precisely the spirit of the Middle Way.

Perhaps for all these reasons, Osho Zen Tarot is not only the most widely known of the decks related to the Zen master Osho but also one of the quite famous Tarot decks in general.