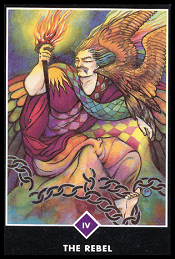 I. The Commentary of The Rebel Osho Zen

The Rebel Osho Zen Tarot is a powerful and influential person in this card who embraces his destiny. Moreover, on his shoulder is the symbol of the sun, the torch he holds in his right hand which symbolizes the light of truth he struggles to gain. Regardless of whether the rich or the poor, this Rebel is truly an emperor since he broke the shackles of the shackles and oppressive ideology of society.

He created himself a rainbow light, rising from the darkness, and the invisible roots of the unconscious past. Then, his wings spread widely to fly into the blue sky. And, his nature is violent – not because he wants to oppose anyone or anything; however, he has discovered his true worth, and because he is determined to live up to that value. The eagle is his sacred animal, the messenger between heaven and earth.

Therefore, the rebels would love to challenge us that we must brave enough to responsible for asserting ourselves and live for our truth.

II. The Meaning of The Rebel Osho Zen

When the Rebel Osho Zen appears, people are often terrified of who knows themselves well. Since they have a specific power, a definite concern, and a determined, prestigious magnetic field, which can draw by the young or dynamic people who are out of the traditional framework …

An enlightened person cannot commit slavery – it is undoubtedly difficult – thus, he cannot be imprisoned.

Every talented person who knows the inner world tends to have a hard time absorbing social thought; they tend to become rebel forces. The crowd does not want to be disturbed, even when they are having extreme pain. They are miserable but used to it, and anyone who is not as miserable as they are is considered a stranger.

The enlightened person is the greatest stranger in the world; since they do not depend on anyone. In conclusion, neither has an organization can imprison them, nor community, society or country that can do it.

The Green Man is a symbol of a glowing heart where the masculine aspect of nature presents. He is one of the oldest figures, showing the connection between human beings and nature.

When The Emperor Deviant Moon Tarot shows up, he advises you to get in touch with your inner sovereignty and natural ownership. Realize that somewhere deep inside you is a royal memory.