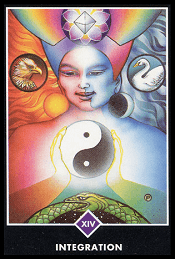 I. The commentary of The Integration Osho Zen

The figure appears in the Integration Osho Zen represents the mystical union, the fusion of the opposite sides. This is the time when the opposites that we have experienced in life meet up. Instead of the night fighting the day, the darkness suppressing the light, they are combined to create a unity, constantly changing from this element to another, each containing in its pure nature the seed of the opposite.

Eagles and swans both symbolize soaring and august. The eagle embodies power and loneliness. While the swan embodies space and purity. It’s effortlessly floating, sinking, and then blending into the emotional elements, completely satisfied and blessed with its perfection and beauty.

We are the integration of eagles and swans: men and women, fire and water, life and death. The card “Integration” represents the essence of creation, of new life and mystical harmony; also known as the alchemy.

II. The meaning of The Integration Osho Zen

When the Integration Osho Zen appears, there is a conflict between humans. It can only be solved there, not somewhere else. The political view exists in you; between the two halves of mind connected by a small bridge. If the bridge is broken by an accident, because of a physiological defect or any other reason, a person would be separated, become two new different people – that is schizophrenia symptom or Personality disorders.

If the bridge breaks – because it’s originally fragile – then you will become 2 people, behave like two different people. You may look cute and gorgeous in the morning; eventually, you will become very angry, completely different in the evening. You don’t remember yourself in the morning … Of course, you do not? because other’s mind are active – one person becomes two. If the bridge is so strong that two minds would disappear and become one, then the integration and a new crystallization occur.

The Balance Wildwood Tarot presents ancient symbols such as serpent-entwined staff or the twisting and turning of the human genome – the source of life.

The Temperance Deviant Moon Tarot is a reference to the soul. Following the classic female prototype, the woman or the angel on the card is a blend of subtle energies for the development of personality.