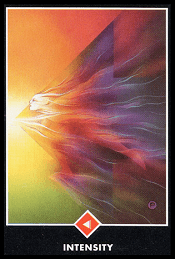 I. The Explanation of Knight of Fire Osho Zen Tarot

The figure in Knight of Fire Osho Zen has taken on the shape of an arrow, moving with the single-pointed focus of one who knows precisely where he is going. He moved so fast that he almost turned into a pure source of energy. His intensity is not a blast of energy – something that usually drives people crazy that they drive their cars at top speed to their destination. That kind of intensity belongs to the horizontal world of space and time.

Knight of Fire’s intensity belongs to the vertical world of the present moment, a recognition that now is the only moment there is, and here is the only space.

Knight of Fire’s intensity belongs to the vertical world of the present moment, a recognition that now is the only moment there is, and here is the only space.

When you act with the intensity of the Knight of Fire, you create ripples in the waters around you. While some will feel cheered and refreshed thanks to your presence, others may feel intimidated or disturbed. However, people’s views are only a small matter, nothing can hold you for the moment.

II. The Energy of Knight of Fire Osho Zen Tarot Based on Osho’s Teachings

Zen says: Think of all the great words and great teachings as your deadly enemy. Avoid them, because you have to find your own source. You have not to be a follower, an imitator. You have to be an original individual; you have to find your innermost core on your own, with no guide, no guiding scriptures. It is a dark night, but with the intense fire of inquiry, you are bound to come to the sunrise.

Everybody who has burned with intense inquiry has found the sunrise. Others only believe. Those who believe are not religious, they are simply avoiding the great adventure of religion by believing.