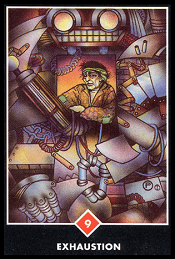 I. The Explanation of Nine of Fire Osho Zen Tarot

This is a portrait of a person who has exhausted all his energy keep fueling the enormous and ridiculous machine of self-importance and productivity. He was busy to “get it all together” and “make sure everything went smoothly” and forgot to rest. Apparently, he could not allow himself to be happy. For him, abandoning the task to take a trip to the sea meant that the whole machine collapsed.

Nine of Fire Osho Zen not only brings the message of a workaholic, but it also talks about ways in which we establish all safe but unnatural habits for ourselves in the hope of avoiding chaos and spontaneity. Life is not a business to be managed, to live is a mystery. It was time to tear off the time-card, break out of the factory, and take a little trip into the uncharted. Work can be smoother if your mind is in a relaxed state.

II. The Energy of Nine of Fire Osho Zen Tarot Based on Osho’s Teachings

A man who lives through conscience becomes hard. A man who lives through consciousness remains soft. Why? – because a man who has some ideas about how to live, naturally becomes hard. He has continuously to carry his character around himself. That character is like an armor; his protection, his security; his whole life is invested in that character. And he always reacts to situations through the character, not directly. If you ask him a question, his answer is ready-made.

That is the sign of a hard person – he is dull, stupid, mechanical. He may be a good computer, but he is not a man. You do something and he reacts in a well-established way. His reaction is predictable; he is a robot. The real man acts spontaneously. If you ask him a question, your question gets a response, not a reaction. He opens his heart to your question, exposes himself to your question, responds to it…