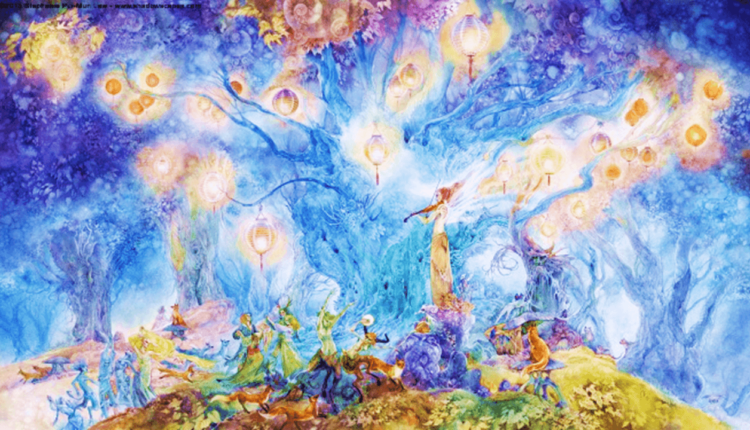 The Introduction of Shadowscape Tarot

Shadowscapes Tarot deck from the author Stephanie Pui-Mun Law deserves a masterpiece in a diverse Tarot world. The deck currently stands Top 10 of All Time by Aeclectic community site. In response to many fans’ expectations, Llewellyn Publications released a version of Shadowscapes with a large companion book. Some people will consider this Tarot deck graceful, beautiful and mysterious in a miraculous fairy scene. And so they are not interested in it. But others – fans of the fantasy genre – enjoy it anyway.

This deck is fundamentally composed based on the traditional Rider-Waite-Smith version that blends with the iconic system of fantasy wonderland and cultures around the world. Each of Shadowscapes cards is a delicate watercolor painting. The style of drawing with rich and luxurious details and the wonderful movement of watercolor will make their owners charmed.

The cards in Shadowscapes Tarot are delicate watercolor paintings – a work of art – and can be seen in its elegant details and rhythmic movements. The reader will be hypnotized by the same beauty. When the reader starts to get used to it, they seem to be lost because of that beauty and can understand the messages of each card. However, when you become familiar with it, you will no longer be afraid of that mystic beauty, so this problem will quickly fade with time and experience.

Furthermore, it seems that this deck works well with people who have a type of reading based on questions like “what do you see going on when you look at the card?” And the answer becomes part of the experience. But even if the drawing makes you distracted and cannot read it in a classic way, there are other ways to get used to it. For example, these images easily make people think it is particularly effective in opening a world of imagination.

Although Shadowscapes Tarot basically follows the classic Rider-Waite-Smith style, it is not a copy of RWS. Law has deciphered the traditional images of the card, pondered their meaning and reinterpreted it with her new look. With many cards, she used a unique perspective, and it is obviously her style. Therefore, for less experienced readers (especially those who depend on RWS template), this is not an easy deck. It requires deliberate thinking and time to get used to the cards. However, the time you spend will bring you to separate cards, you will find new paths. In other words, this is a worthwhile journey.

In fact, every time we look at the cards, we can gain more experience and our own understanding of them. One of these detailed origins is the very popular and subtle appearance of nymphs, dryads, and fairy in every scene on the cards. However, you will often have to look very closely to see them, and you will have to think about what they are doing to be able to understand the messages that these characters convey. For example, there is a fairy who is looking at a skull in the Wheel of Fortune (the skull is a traditional illustration of death in our perception) but you may easily ignore this character because the Wheel behind is too gorgeous to hide her.

II. A summary of some cards in Shadowscapes Tarot

At a glance, Wand cards have the appearance of foxes and cats, they are painted on a warm amber background. Not surprisingly, the Cup is the appearance of fish and mermaid, the main color is cool blue. Birds, especially swans and crows, often appear in the Sword, and the main color is purple (Sword cards seem less devastating than usual). Cavalry and dragons exist everywhere in the green of Pentacle. Court cards are constantly changing which makes it easier to distinguish one by one.

In Shadowscapes Tarot, Major Arcana is adorned with birds and butterflies. However, we can clearly see that there is no dominant color in the Major suit. Each of the Major cards is painted by a specific color though Law seems to focus on using purple and blue. The only thing that changes in the Major Arcana is the Death card, which is replaced by the phoenix, making the thought of the card’s change clearer. In some other cards, there is also a small change. Like the High Priestess standing up with an active posture, as opposed to the usual passive posture. Two decorative stone pillars were repeated in the RWS Major cards have disappeared as well. It does not seem like a problem but still is a concern for some people. Finally, Strength card is VIII and Justice is XI, for those who want to know.

The companion book of the Shadowscapes Tarot

The companion book of Shadowscapes Tarot, written by a Tarot expert, Barbara Moore. The book consists of 250 pages (with many illustrations), and it is divided into three parts, the first and third parts written by Barbara Moore. The first part (introduction) is an explanation of how to read Tarot, and it is quite brief. The end of the book is a collection of Tarot spreads, ranging from very basic to newbies, to detailed and experienced ways of spreading.

The middle part is written by the artist and illustrated by the image. Law’s descriptions evoke meaning and make cards clearer. But it does not fully explain the meaning of some symbols in the card. With many unexplained details, many people who want things that are clear will be disappointed at this point. But if you like to find out yourself, it will give you suggestions, the book will serve you better. And of course, if you are an experienced Tarot reader, you will ignore the book. If you wonder why the deck is named Shadowscapes, Law explains that her paintings are “the shadow of truth held in … a dreamy world created by the light and appearance of light” – with Riki Kazuko.

This is no exception to the deck or any area you pursue. If you love and are interested in Tarot, you will have enough perseverance to pursue it to the end. So, what you need is to give unconditional love for Tarot and Shadowscapes, so all difficulties will become a piece of cake on the way to conquer it.

2. Shadowscapes Tarot is a deck of standard Rider-Waite cards

The Romans once had a very famous – “All roads lead to Rome”. Later that sentence is used when people want to talk about all the different actions that can lead to the same result. For the decks based on the Rider-Waite-Smith standard, no matter how diverse the images are, the different ways of feeling, symbols, colors, layouts, arrangements, etc., in the end, they all bring the same meaning to the standard RWS deck. So, even though Shadowscapes Tarot has a lot of images and a lot of confusing details compared to RWS, the meaning of the cards still corresponds to RWS. Initially, we should still follow RWS to be able to master the most basic things.

The simple example is in RWS, cards are matched with zodiac signs and planets, which will make it easier for beginners to recognize and analyze the meaning of cards through the characteristics of the zodiac, so does Shadowscapes. The fact that Major cards in Shadowscapes Tarot are mentioned in the corresponding zodiac/planetarium makes the meaning of them more clearly formed in the learner’s perception of using Tarot.

3. The companion book of any deck has important meaning

Shadowscapes Tarot manual is no exception. The guideline written in the companion book is very important in understanding the detailed images. You should read over and over again the suggestive details in the book so that you can analyze the cards. However, the keywords included in the book are also quite considerable, and you should memorize it, to back up the times you can not feel the card, you can use keywords to help. This is somewhat effective for beginners!

4. Focus on the main details in Shadowscapes Tarot

There are many readers who wonder what very small details in Shadowscapes Tarot are, why there are so many birds in the deck, so many spiral patterns (like shells), what this mirror image means. The important thing is the biggest picture of the card. Or even there are many pictures that the author draws to take up the empty space of the card.

Thus, in order to stop rambling and distraction, you should pay attention to the main details and clarify them. Then, if you like, you can look at the extra details and add some small materials that you like. It is also a fun way to learn while playing.

5. Shadowscapes Tarot is a collection of great cultures around the world

If your knowledge of culture is vast, it will be great and convenient to understand this deck. Stephanie has led users from one culture to another in a very personal and experienced way. She uses particularly familiar visual details and transforms it into extraordinary originality, and then assigns its meanings appropriately makes it even more interesting for those who learn. In the companion book, she only evokes the image details. The rest of your work will be to explore and comprehend it.

It is not necessary to read reversed cards because each card itself has both good and bad meanings. For example, the Lovers, it is perfect and absolutely beautiful love, but it will be difficult to prolong due to the low level of reality. Both parties cannot give up everything to love each other forever as in fairy tales because they have jobs, family, and society. That is the duality of Shadowscapes. And the name itself is all about the “Light in the Dark”.

What we can learn through this deck is not to be too pessimistic when it comes to problems, and do not be too excited about things that seem auspicious and smooth. Instead, we must always keep the spirit of optimism and stability in everything.