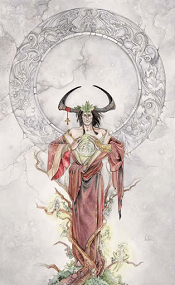 I. Description of the Emperor Shadowscapes Tarot

The Emperor contemplated the past…

He remembered that there once existed another man. Was that person his father? His teacher? Or just a defeated king? His greedy mind closed until he appeared, then that man had to accept to transmit the dragon ball for the new era.

He reminisced about the charm of the ball around the moment his eyes caught it for the first time. And only when he lightly touched it, the power of the inner creature overflowed, passing through his hands and taking his mind completely. “Now you are the lord of the eternal kingdom” Who, who raised that voice? Or is it from the dragon? Now, he needs to realize that he is already that dragon.”Oh, right!” He said loudly, probably because he was clear about it.

II. The meaning of the Emperor Shadowscapes Tarot

Carved motifs on the wall bear the symbol of the territory and dominant power. The image of an eagle climbing above the mountain and the sea, day and night, governs all things. The creatures on the ground bow down to the rule. However, no matter how perfect the wall carvings are, the wall is only within the limits of human architecture and demonstrates the successful control of the wild part of the world by trying to engrave them into immutable stones, expressing the dream of mankind about controlling, carving, and writing the story of his own destiny.

Emperor Shadowscapes Tarot is generally assertive, focused, and quite emotionally stable, thus, many small creatures looked up at him. He seems to be connected to nature (which represents by leaves on his head and the tree he is standing on) and supernatural forces, however, he is also not disrespectful to religions.

There are also many animals here: two rams, one snake, a few dragons, at least one bird – one of them is trapped in a ball.

The thing that seems inconsistent with the card is the sun on a city to the left of the Emperor and the moon with some stars or galaxies in the desert or some hills. Large circles behind him can also be viewed as a stylized sun, or some of them, depending on the number of circles we consider.

This card represents strength. The image of the Emperor is a King with his full power, one hand holding the scepter, the throne is decorated with figures representing the Aries. The meaning of this card implies both the positive and negative side. It actively reflected in the fact that you have the power and the help of powerful people and you have a great ambition in your career that will boost your development. However, the card can show a strict control that will come to you.

III. The Emperor Shadowscapes Tarot in a spread

Emperor Shadowscapes Tarot is a sign that this is the right time to prove your strength. At this stage, you will receive a lot of attention and support from another person who will help you improve, do not be afraid because this is the best time to take advantage of all of your potentials and create a breakthrough.

However, you should refrain from your great ambition and be calm so your body has time to relax and adapt. The high pressure and the desire to win can make you lose your strength, let’s give yourself the time to relax to relieve the pressure.

Emperor Shadowscapes Tarot is not a good sign of love. Your partner may be a dominant, authoritarian and stereotypical person who wants you to do everything according to the rules and punctuality. He/she could be the one with a scientific and energetic lifestyle and this strong personality will cause your relationship falls into a dead end. The situation will get worse if both do not find harmony in thoughts and words and do not sympathize with each other.

Because of positive energy and self-ambition, your work will progress like the duck in water. Someone’s support will help you conquer goals easily. This person will be very helpful for your work, so you should maintain a friendly relationship with sincere gratitude. However, Emperor Shadowscapes Tarot forecasts that you will meet a strict teacher. You will learn and cultivate much new knowledge but the pressure to bear is also relatively high.

This card also means that if you do not want to lose money unfairly, be careful with seemingly lucrative contracts. Cautiousness should be put above all, and you should follow familiar principles and avoid creating or bravely going a new way because this is not the ideal time.

It brings warnings about strange signs on the body. If you feel anything unusual, check it out right away. Because of the ambitions of your work, you might be under pressure and feel tired. You should strengthen healthy activities like fitness, gym, walking, and meditation. The meticulous and careful personality will help you recognize the importance of health.

On the negative side, Emperor Shadowscapes Tarot means that you are unable to control yourself, your work and lifestyle arrangements are lacking inaccuracy. Sometimes, you fall into a state of extreme fatigue due to the pressure from your superiors leading to discouragement and surrender. We can easily recognize that Emperor Shadowscapes Tarot is a card of power, rule, and domination. The constant ambition can make you fall into a state of overload.

Financial problems can happen due to your overconfidence. Sometimes, certainty and dominance will cause you to lose opportunities. The person who can give you advice and help can be a man like your father, brother, boss or colleague. These people not only give you useful advice but also provide an opportunity which you hardly get on your own.

The Emperor Thoth Tarot card shows a majestic and mature character who dressed in stately costume and fitted with two giant male sheep heads that symbolize the two pillars or the back of the crystal throne.

The Emperor- L’Empereur Marseille takes number 4, combined with stability like the shape of a square, which is a symbol of material guarantee. The four legs of the table and the altar of the church also has a connection with number 4.