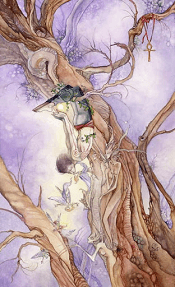 I. Description of the Hanged Man Shadowscapes Tarot

In the depths of the thick layer fog of the forest, he dipped his fingers into the red clay, and with skillful hands, he painted the patterns on his skin, then his chest, arm, and face. The red spiral lines attracted him into deep meditation, where thought turned into action and silence spoke in the voices of the Gods.

When the silence in the soul becomes absolute, he walks with his feet. The souls of the forest follow every step of the young man, as silent and respectful witnesses. They hesitantly reached out to touch the sacred flesh, then fell to his every footstep. With a serious and reverential attitude, the group finally reached the great oak tree.

The Hanged Man accepts to sacrifice himself. He voluntarily faces his fate, loses his balance by controlling himself, accepts for the sake of rewards that he understands that only through sacrifices can it be received. The ivy wrapped around his body, twisted and tightened him with the tree until both of them merged into one. Ivy – the symbol of consistency, unbreakable strength and will of the human spirit.

Being influenced by his actions of faith and sacrifice, the spirits closed their wings, dropped themselves from the perch on the tree and entrusted themselves to the winds.

II. The meaning of the Hanged Man Shadowscapes Tarot

The Hanged Man refers to giving up and surrendering to experience and release emotions, accepting reality, giving up control, suspending all actions and sacrifices.

Just like the God Odin who hung on the World Tree Yggdrasil in his quest for knowledge, from there, he received the best rewards by voluntarily renouncing himself. The Hanged man also urges you to reverse the way you look at the world and see things in a new light. Sometimes, a small change in someone’s perception of the world requires subtle ups and downs of the state of mind.

III. The Hanged Man Shadowscapes Tarot in a spread

The Hanged Man Shadowscapes Tarot card will take us through a North American myth with Odin and Yggdrasil.

Mythology said that the supreme god Odin hung on the Yggdrasil tree with his spear for 9 days to gain knowledge of the Runes. When the Rune alphabets were in his head, he left the tree and carried them. The Runes gave Odin power. After passing the test of the Goddess Freyja, she taught him spells to become the Lord of the Northern Gods. And Heimdall, the God who created the rainbow, has taken on his behalf to bring Runes to mankind.

The image of Odin hung on the Yggdrasil that Stephenie puts in the card, which makes it very clear that Hanged Man’s willingness for the other greater purpose. It seems that Hanged Man Shadowscapes Tarot is immersed himself in any fantasy world that is different from the real world, where all boundaries and limitations are not allowed to enter. He was engrossed in the search for enlightenment without even paying attention to the fact that his body was being hung upside down.

Being thoroughly voluntary and satisfied, he guarded everything around and completely belonged to his own world. It seems that this is the reward rather than punishment as the first impression most people have when looking at the card.

When the Hanged Man Shadowscapes Tarot card appears in a spread, you are probably in a difficult time of giving up many important things to try to achieve something you want. Even though it is difficult, you are still passionate about finding ways to complete without complaining. Or worse, you are persisting and sacrificing yourself for something vague and unclear and it hurts you more than you can realize at the moment. You only close your eyes and go with the flow, without any sense of resistance to change reality. No matter what the meaning is, the card still wants to emphasize your willingness to make choices, not being forced to do so.

So, the Hanged Man Shadowscapes Tarot also offers advice on acceptance and letting go. Depending on other cards you draw in a spread, you will have different interpretations. But Hanged Man has always appeared in the difficult period of the questioners, with their choice for their own circumstances. This means that the final result, whether positive or deadlocked, depends on them during this period, so be careful in giving them advice when it comes to the appearance of the Hanged Man.

Corresponding to the Hanged Man Shadowscapes Tarot is Neptune – a planet of dreams and vague illusions. Along with Neptune, the Hanged Man offers opportunities for artistic ideas and superior psychic abilities to help those who receive this card feel more excited when they decide to do something related to the field of art and spirituality. However, this may be the time when they are passionate about pursuing their interests and forgetting many other practical values in life.

In addition, Neptune which is the ruler of Pisces and the 12th place in the map of constellations, where people will easily immerse themselves in alcohol, drug or other stimulants to forget the harsh reality. Or worse, they abuse self-harm actions to forget mental pain. So, it is not easy to get this card in the spread related to solving deadlock problems. The tarot readers should be careful and try to help querents to calm down to face and solve each problem clearly before they do crazy things.

In short, the Hanged Man Shadowscapes Tarot is a mysterious card, it states that you have to let go of something around if you want to get the bigger thing back. Sometimes, you have to give away money, time, health or something you love. You have to experience feelings of inadequacy and sadness when giving up to aim for a higher goal. At times, the card represents the overcoming of your illness, energy, money, time to treat, they are things you have to trade in order to regain equilibrium.

The Hanged Man Rider Waite Tarot card is one of the most mysterious cards in the deck, simple yet complicated, and inconsistent in many ways. As you can see, the character in this card turns upside down, symbolizing paradoxical actions (but true ones) in life.

The Hanged Man Thoth Tarot card represents, and nothing more, the subject of revolving around one’s life. So, it represents the crisis in the midst of life, as well as all the big and small changes.

The Hanged Man – Le Pendu Tarot refers to the moment of a pause in everything so that we can turn to our advantage by improving our plan in more detail, self-understanding, and internal work.