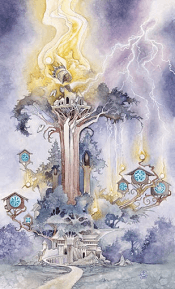 I. Description of the Tower Shadowscapes Tarot

The seed drifted by the wind, gently landing itself in a strange land. From there, it has gradually taken root and sprouted into a big tree. And so, as time passed by, the tree has become steady and majestic, it was an ancient tree among giant trees, they lovingly wriggled together, creating yet another masterpiece of Nature.

The birds landed on bright leaves, cheering and singing, the space filled with melodies inspired by the warm rays of the sun, the fresh breeze, and the blue sky above. Men and women rested in peaceful dreams, flickering specks of light as they looked far away toward the murmuring water and soft humus. Even in the harsh winter, dense branches and foliage have become a refuge for any traveler, whether they are humans or animals – this was still a paradise for anyone to wander through.

As many years passed by, and it remained here forever, firmly with its massive roots deep into the ground. The branches seemed to reach through the sky, gently brushing off the stars and caressing the moon each time she passed by. The roots plunged deep into the ground and enveloped the surroundings in beats behind the darkness in the depths.

Then, with a light and simple turn as she adorned the tree with various blessings. Mother of Nature recovered her gift. She threw a terrifying spear down from heaven. Everything that a tiny sprout built after centuries now was destroyed in the blink of an eye, with a flash of shocking and decisive lightning.

II. The meaning of the Tower Shadowscapes Tarot

It also implies a critical and dramatic turnaround as the only way to break the established frameworks. Oddities are broken by the harsh and violent hands of truth which creates purity to re-evaluate the system of beliefs and choices.

III. The Tower Shadowscapes Tarot in a spread

The Tower Shadowscapes Tarot brings a sudden and unexpected change. In one minute you have it all and then it disappears. Therefore, we cannot fully grasp the literal images of the Tower. Those are symbols for an external meaning. The pictures look awful but in real life, the energy of this card comes in many forms. Just like the Death Shadowscapes Tarot is not about true death. The Tower does not always talk about collapse and ruin.

When we think we know it is right and it will remain the same, the Tower comes and changes our deep beliefs. That is the energy this card brings. The good thing is that it allows us to build and rethink our belief system. It is a dramatic and unexpected change but it can lead to a more positive outcome if you try to find the blessing in it.

The Tower Shadowscapes Tarot card is like a giant tower, once collapsed, will bring immeasurable danger. This collapse is something you probably do not want but still happens and has consequences. The meaning of this card represents your rebellion and struggle after a period of suffering. Your protests will surprise many people and shock even yourself. On the positive side, the message this card brings is a storm in your passing life, you will live with a stronger and more optimistic spirit.

If you are in a relationship with someone, this card is not a good sign. The two of you will have argued and hurt each other, the constant quarrels that make it almost impossible for both of you to continue. However, there will be two cases, if you and that person still love each other, the problems will be solved if either of you compromises and a new phase of sympathy and understanding between you two will begin. In the second case, hurtful and insulting words force the relationship to an end.

The Tower Shadowscapes Tarot does not bring good signals in terms of career. Things that you think cause no harm can actually affect your current job. The important thing to do now is to be calm, every step requires calculation. Any haste or impatience will not bring good results. Even if you mishandle a little, everything you have accomplished at work can be shattered at the moment.

At this point, the trouble surrounding work and the costs incurred will make your finances become tight. If you are looking to invest in a new product, you should consider carefully. If your career is in a flourishing period, you should be prepared for the rainy days because the Tower predicts that the impending obstacles will soon put you in a difficult situation.

The chaos taking place in the tower represents the turbulence and desire to escape from the bondage of life. This card shows your transformation, sometimes in appearance or personality, you will quickly become stronger and more assertive than before. You can achieve surprises in life in a positive sense if you know how to express yourself at the right time. However, the Tower Shadowscapes Tarot also warns that your disclosure could have consequences if you do not know how to abstain.

On the negative side, the card predicts crises in life. You are struggling to manage so the situation does not get worse, but it does not seem to work. It also predicts a financial loss or represents a breakdown in relationships. Nevertheless, the most important thing is your attitude towards everything. You have to accept that the downfall, even though it hurts but when you overcome it, you will have a stronger spirit and a more positive outlook on life.

The Tower – La Maison Dieu Tarot de Marseilles is not the house of God; it is the House/God. Tarot cards suggest quite clearly with bright red bricks, that our bodies contain Gods.