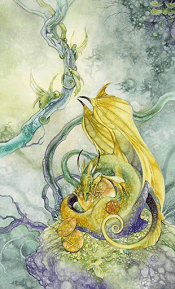 I. The meaning of the Four of Pentacles Shadowscapes Tarot

The dragon, cautiously and irritably, slowly relaxed its body and curled itself around the heaps of treasure that it had struggled to accumulate. It has spent countless lives to collect this huge treasure. No one can touch it, no one dares to touch it. “Mine!” It hissed, an unfriendly warning to even the tiny relatives as they gathered to see them. The salamanders and lizards immediately ran out, as quickly as possible, before the crazy old dragon raged and attacked them all.

“This gold is mine!” He shouted the statement again. He knew geckos were staring with craving eyes from above. He knew they were always waiting for any opportunity to come and stole everything. Gradually, selfish fear kept growing and congested all over his mind, suddenly rising, tearing up and swallowing up the whole rational thought, so even the light, he was full of doubt, he curled up tightly and closely from tail to nose.

His relatives slowly ran away, throwing him back at night and disgusting loneliness. The dazzling scales of the giant creature mixed together with the glossy appearance, to the point where it was impossible to distinguish between gold and dragon. “Oh, it’s so comfortable, those glowing golden lights, wish they never change!”

The Four of Pentacles Shadowscapes Tarot embodies a spirit of high possessiveness, one that always wants everything under his control. As a result, he had to live in the weaknesses, struggling in a prison created by himself, but did not like it and thought that it never needed to change. He created obstacles, always denied his weaknesses, chained by limited things, one who lives in miserliness. As a message of liberation, let’s learn to give up on selfishness, which may bring more happiness than what you have collected or tried to protect for a long time.

II. Four of Pentacles Shadowscapes Tarot in a spread

The Four of Pentacles Shadowscapes Tarot can be a card representing the will to keep things, people, money, or circumstances stay the same. When this card appears during the spreading, it is a sign that you need to be very careful to consider whether you are constantly clinging to something or whether you are involved in something unhealthy.

In general, this card can be a sign that the querent is having concerns/worries about the money and/or getting involved in something that makes them feel insecure. The key point to be aware of in this case is that anxiety and fear do not bring you safety. If there is a card in your turn that reminds you of an old saying “If you love someone, set him/her free”, that is exactly what you should do, forget about the fear and worry.

The Four of Pentacles also refers to an act of hoarding. If you’ve received something, you decide you don’t want to share it with anyone. You do not want to dispose of them even if they are no longer valid. This card alludes to ambiguous relationships in terms of love. It shows your obsessions, you tend to deceive yourself and annoy others.

Sometimes, stubbornness can bring good results if you know how to apply it to conquering goals. However, it is these stubborn and headstrong that will make you lose in most situations.

In love, you’re expecting too much on your significant other, you want him/her to be a perfect and comprehensive person. However, the fact that your partner did not meet these requirements disappointing you. You always feel like you have sacrificed a lot for this relationship but it didn’t pay off.

The Four of Pentacles Shadowscapes Tarot implies that the current relationship makes both of you extremely tired but no one wants to let go. The advice here is to lower your standards, accept change together, and do not force the other person to do what they do not like.

In terms of work, this card implies that you have received rewards that commensurate with your efforts. However, the pride of your past accomplishments keeps you asleep on the victory and being left behind. You should keep trying and improving yourself, remember that if you are good, there will be better people. In addition, Four of Pentacles Shadowscapes Tarot also warns the appearance of competitors will make everything disturbed.

The good news on the financial side is that the source of income is relatively abundant and the expenditure is quite small. You have a reasonable spending regime and plan to use the money for essential things. However, not letting your source of money flow makes you lose chances. Do not be too unadventurous because the opportunities are always unexpected.

Besides, Four of Pentacles Shadowscapes Tarot warns that excessive savings make you less concerned about your health, you forget about regular checkups which makes your body condition worse. This card reminds you that indiscriminate use of medication that is not directed by a qualified physician will cause unpredictable harm.

It also implies that this is a time when old sickness can recur. You need to pay well attention to the abnormal signs of the body to minimize the risk of dangerous diseases. Regular examinations should be carried out according to doctor’s instructions, at the same time, you should limit overwork and take moderate rest.

In short, Four of Pentacles Shadowscapes Tarot says that you have tried to manage yourself and money, which creates success. You have worked very hard to ensure the future. Everything somehow makes you greedy and authoritarian but it makes sure that your success is always maintained.