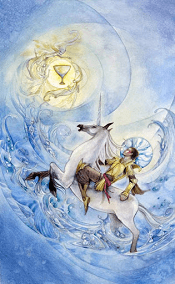 I. The meaning of the Knight of Cups Shadowscapes Tarot

Unicorn is the son of the sea, born of sponges and endlessly white waves and surged with the wild abandon of the ocean. Only those who have a pure heart can touch this creature, and fewer are able to ride on their backs. Knight of Cups is the companion of this creature in secret missions, only the two of them together during the mysterious journey.

He is the Knights of the Round Table, with the mission of finding the Holy Grail. He is an amorous person, always following the call of the heart and emotions, the artist, the musician, the poet, with eyes that can see through the invisible kingdoms of fantasy. He is the type of dreamer, not allowing any laws of physics to prevent himself from surfing on the waves during the fleeing.

Knight of Cups followed his dream. He always let his intuition lead the way. The sea goblins and spongy spirits told him about the wonders behind the strange uncharted lands outside, he wished he would have the opportunity to follow these goblins and experience vividly those stories. The Holy Grail embodies the perfection he always seeks. He understood that if he kept true and faithful, and pursued what his heart told him, one day he could taste what was contained in the cup.

The stirring waves raged along with the knight’s awakening, but he did not care what was hiding behind the deep blue wave, he only noticed the beauty of the sparkling water.

II. The Knight of Cups Shadowscapes Tarot in a spread

The person represented by the Knight of Cups Shadowscapes Tarot is an erudite person who loves exploration. At the same time, they are extremely sensitive to the intentions and plots that target them. They are people with strange charms, who have a panoramic view. In their personalities, they are sometimes the ones who seldom pay attention to their needs and take the needs of others seriously, so they are deeply vulnerable to mental abuse by those who take advantage of their beliefs and they often create a burden on themselves.

On the other hand, they are people who tend to excessively love and protect, even want to impose their will on those they love. They also tend to avoid confronting conflicts or resolving them emotionally and lack analytical root cause. However, they are the ones with good financial management ability.

In general, this Shadowscapes Tarot card will tell you that things will get better. You may feel full of energy and ready for action. This card often means that the good news (especially in your inner world) will likely to come to you.

Regarding money, what you pursue is a new feeling. So, before deciding to spend on something, think carefully because you will get bored if it doesn’t help you. On the other hand, in the upcoming time, you will have many problems related to work and family which makes you obliged to spend money. Therefore, you should be mentally prepared at this point.

In terms of relationships with friends, the Knight of Cups Shadowscapes Tarot reminds you to be generous with them physically and mentally. As for colleagues, this is not the time for you to argue or to talk frankly about problems that target you with hatred. This Knight advises you to mind your own business first, keep a strong heart and a cold mind, so one can take advantage to attack you.

Knight of Cups Shadowscapes Tarot can manifest as an event, a person in your life, or as a part of yourself. This Knight often appears as a messenger, an invitation or the appearance of someone or something that brings good feelings. He offers an interesting invitation, resulting in an emotional experience that will bring you energy and put you in an excited state. In addition to providing information, Knight of Cups Shadowscapes Tarot can also represent the wisdom that comes from your dreams and help you overcome life’s obstacles.

If you are starting a new creative project, bring your imagination into the real world. Actions are the lifeblood of your imagination, so if you do nothing about your dreams, they will be forever vague and unrelated to your life.

Besides, Knight of Cups Shadowscapes Tarot brings a warning about being caught up in the imagination and romance of life. The imagination brings excitement but it will always be unreal if you cannot connect it to reality.

In terms of work, Knight of Cups describes you as a person who has many new and creative ideas but is easily emotionally affected. You need to train your bravery. The sentiment is a motivation and a big goal if you put it in the right place at the right time in your plans. Therefore, you should actively respond and solve problems as soon as it appears.

Knight of Cups Shadowscapes Tarot also shows enthusiasm. You can work emotionally and not engage in inappropriate negotiations. But you need to invest in your passion and should not let your emotions dominate over your mind. You should be patient at this stage, which will help you avoid financial losses. Knight of Cups encourages you to actively carry out your work.

This card sometimes refers directly to the person involved in your job. This person is very creative and inspiring. However, they do not have high stability and are easy to change.

In terms of love, Knight of Cups Shadowscapes Tarot represents a person who is full of romance. You believe in true love and think that you will put your whole mind into it. It signals something interesting is coming, your lover is about to appear. This relationship is emotional and you have high expectations, even if it is not realistic.

This Knight has the ability to immerse people in gentle and peaceful emotions. They are quite sophisticated people and know how to make their partner satisfied. But they are the ones who get bored quickly and have difficulty maintaining stability in the relationship.

Knight of Cups Shadowscapes Tarot is someone who believes in true love and will do his/her best to create a passionate relationship. As a daydreamer, that is why they will quickly get discouraged if facing a standstill, though it is not significant. In a long term relationship, they are the type of people who can hardly live without love. However, Knight of Cups is also very afraid of the bond of marriage.

This Shadowscapes Tarot card also wants to tell you to explore your passion and big ideas at the moment. You will realize that you have been fascinated by a passion or a hobby for while a long time and this is the time to take action. You do not need to burn the stage, instead, balance the idea with the action and ensure that you are actively striving to achieve your goals and ambitions.