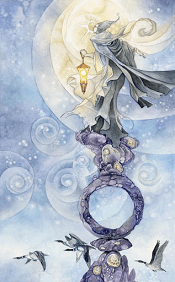 I. Description of the Hermit Shadowscapes Tarot

He left everything behind to start the journey, turned his back on the noisy, glistening flashes of light and the multitude of worldly pleasures around the world. In the city, the faint light of the stars is engulfed in the glowing light and the vague mist of life.

He took the lantern. An unknown knowledgeable woman told him that it was part of a captive star, and it knew the path to home. The dim beam of light pulled him into the valley, high above, there was a sparkling lake which its calm surface looked like a mirror. His star-lantern showed the way, so he did not know where he was going, but after each step, in turn, a new sign lighted up, and just like that…

He climbed to the far end of the mountain, where there was no trace of mundane smog, he left the flashy atmosphere. There was only purity that he did not realize that he has missed from the first breath, and therefore, he suffered and could not live without the breath of that life. Others had come to this position before him, but the steps seemed to be pristine and there was no evidence of their journey. It is the essence of where each person comes, they are the first and only one, no one can step on until the presence of the guest sinks into oblivion.

It was a long journey, and during the trip, his eyes finally became familiar with the darkness of wildness. He left his memories in town. The star in his lantern burned, fierce and brilliant; and in that distant sky, the star’s siblings in heaven were swirling in a dance of joy and happiness.

II. The meaning of the Hermit Shadowscapes Tarot

The Hermit Shadowscapes Tarot refers to the inner lifestyle, seeking solitude, withdrawing from the world, giving or receiving guidance.

The Hermit is an inspirational friend and teacher, his help can enlighten the secrets of the mind. The occult can be clarified by the right light to illuminate the situation. The Gavia Immer surfed on their wings, quietly crossing the horizon and evading the falling darkness. They are a symbol of love and tranquility and their strangely persistent sadness echoes throughout the regions containing inner ancient wisdom. They are respected by their knowledge of the sky, the sea, and the green forest, and are often found on the headgear of Amerindian chieftains.

III. The Hermit Shadowscapes Tarot in a spread

Corresponding to the Hermit Shadowscapes Tarot is the Virgo – a zodiac is often attributed to perfectionism, judging or saying philosophy. The ruler of Virgo is Mercury – a planet about communication, writing, loving to influence others with its own inferences. So, according to a lively constellation of words and speech like Virgo, how can it be a closed and silent card to find complete peace?

Hermit did not want to isolate himself in search of other unique values with ones that favored by the contemporary, but because he could not accept what seems offensive onward and did not want his words to be underestimated, therefore, it would be better for him to withdraw. However, if there is a chance to be used, Hermit will immediately return to the place of slander because the nature of Virgo is still like to use her thoughts and arguments to influence others and always wants everything in her interest to become better. And Hermit’s contemplation and meditation never stop, so when he retreats to the hidden place, he will have more time for himself to review more profound things.

When the Hermit Shadowscapes Tarot appears in a spread related to the relationship, you will see that your partner suddenly becomes silent and close-minded, not sharing anything with you. Because they are feeling that there are so many problems between the two, too many issues that have not been clarified, and they do not feel satisfied.

Perhaps, before they became uncommunicative, they spoke out their thoughts about those issues but you were not interested in. The cold war always negatively affects any relationship. So, in this case, you should rethink past events and connect each piece together to clarify the conflict between the two of you. The Hermit has always been a hopeful card in nurturing the relationship to become more passionate, you just need to be willing to listen and share thoughts.

In terms of work and projects, Hermit Shadowscapes Tarot warned that perhaps you had taken your ego too seriously that you did not care what your partners, superiors thought, needed and wanted. This will greatly affect the general work, so you should adjust your own ways of working and thinking.

Sometimes, Hermit appears as a guide about how you should be more careful and perfect at work, do not let yourself become superficial and negligent. Anyway, you need to view the other card’s positions in a spread before considering the Hermit’s meaning for the best!

At the same time, the Hermit Shadowscapes Tarot also indicates a person who likes to read, contemplate, write, share experiences (through books and theory), and talk about philosophy. You will not be surprised if Hermit is a person who is rather sitting around all day, scrutinizing all the bad things around them and saying philosophy before they feel their words are not taken seriously, then they become silent and withdraw their thoughts inside. Therefore, it is not exaggerating to assume that Hermit is knowledgeable and understandable.

The image in Hermit Shadowscapes Tarot card is almost analyzed in the companion book, a hermit holding a lantern in the dark, self-groping his own way. There are Loons underneath – a species of bird that Indian chieftains used their leaders to make fur hats. These hats are only honored to be placed on the top of the most intelligent people of each tribe.

Hermit Thoth Tarot card focuses on exploring the spaces of consciousness. By doing so, he delves into the mysteries and the deepest abyss (Hell Hunter). This is not a simple rationalism problem.

Hermit – L’Hermite Tarot de Marseilles left the VIII Major card by retreating to advance, turning his back to the end of the first decimal cycle and to begin a new cycle. By withdrawing from the card VIII, he is leaving an insurmountable state.