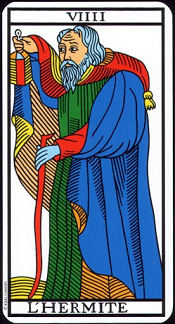 I. Overview of the Hermit – L’Hermite Tarot

Number 9 is the most prominent number in the odd number sequence because it is the first number that can be divided for some other than itself. So, the number 9 (3 × 3) is two-dimensional, both action (odd number) and comprehension (even number). To better understand it, we only need to visualize its movement between Justice, number VIII, and Major card number X, which will be mentioned next.

Hermit – L’Hermite Tarot left the VIII Major card by retreating to advance, turning his back to the end of the first decimal cycle and to begin a new cycle. By withdrawing from the card VIII, he is leaving an insurmountable state, which if he still stays there, will only lead to death. He did not go further but gave it up, so he stepped into a crisis. It is possible to compare him to a fetus in the eighth month that has fully developed in the uterus. All of its body parts were formed, and it was no longer missing. In the ninth month, the fetus is about to leave the womb which is the only environment it knows, to enter a new world.

Along a similar line of thinking, Gospel texts teach us that Jesus was crucified at the third hour, carrying extreme pain at the sixth hour, and dead at the ninth hour. Number 9 announces both the end and the beginning. Hermit proactively ended his relationship with the old world and began to comprehend a mysterious future through things he had not yet mastered. To distinguish clearly from Pope, who built an ideal bridge and knew where it would lead, Hermit – L’Hermite Tarot represented the journey into the unknown. In this sense, he represents the highest form of wisdom as well as the state of deep crisis.

The lantern he carried can be seen as a symbol of wisdom. Hermit – L’Hermite Tarot raised the lamp, clarified the past, like an experienced man, a scholar, or a therapist. This light may be secret knowledge for monks, or vice versa, a source of knowledge given to any clergyman looking for it. He illuminates the path, or perhaps, he used the lamp to modestly attract the attention of the Gods: “I have completed my work. I have reached my goal, look at me”. Just as cards that have a contradiction between action and comprehension, this light can be positive, as a call to awaken one’s consciousness, or to be receptive, like a lighthouse lamp.

As the High Priestess, Hermit – L’Hermite Tarot is a very mysterious character. His multi-layered clothes show the cold and winter – the characteristics of Saturn are often attributed to him and it also reflects a certain indifference of knowledge and the loneliness within. We can also view them as life experience classes; and likewise, diverse patterns covering his clothes can be interpreted as a sign of his great experiences. The hunchback, in a concentrated form, contained all his memories. There are two orange crescent moons, one on the back of his neck and one inside his cloak, showed that he had developed his perceived qualities. At the hand holding the lantern, we can see the hips and pubis of a miniature woman: a sign of femininity or some worldly desires that still remain in him.

On the other hand, there are three wrinkles on his forehead that are the message for mental activity. Hermit – L’Hermite Tarot turned his eyes to the distance. His beard and blue hair show that he is related to the Emperor, who has lost or abandoned his throne or can be said to be his attachment to the matter. His blue gloves, similar to Pope’s, show the deep spirit to his choices, actions, and plans of the journey. His hood and red stick, in contrast to the Fool’s yellow and red hood, also linked him to this Major card. However, Fool’s stick has a curved shape; it received life, the road that has been through and the work that has been completed, it was possible to see it through the plowed land.

His dark blue robe is a sign of humility and receptiveness, the moon’s consciousness. The inner canvases have the skin-colored, evoke the image of organs, there is no more theory but the life experience of an individual who draws lessons from his own path. But on the inside, in the middle, there was a green color that covered him. We can see that in Islam and Jewish tradition, green is the color of eternity.

Hermit – L’Hermite Tarot, with the first H-letter of the Hermes alchemist, God may have discovered the longevity pill, and like a Jew vagrant, he may have reached eternity. Both rich and poor, knowledgeable about death and rebirth, he propagated that a part of us can become eternal and inspire us to overcome the crisis in a courageous way, to go where everyone knows.

The Hermit – L’hermite represents an inevitable crisis, a profound change we need to confront and accept. It reminds of a teacher, a therapist or a guide. But in a crisis, there are two possibilities that can occur that Hermit will renew himself or die. Therefore, he also mentions poverty, loneliness, and even decadence and degeneration. You might consider him a “wanderer” or even an alcoholic who is hiding red wine in his lantern.

The Major card VIIII – – L’Hermite Tarot is the most reference version of humanity and indifference of the father prototype of card XVIII. In this way, he can recreate the image of a father who is always absent, or a quiet person, a recluse, or has disappeared. He also mentioned, for the reader, the inner loneliness, a dark and secret space where the transformation of the soul was prepared.

IV. When the Hermit – L’Hermite Tarot speaks up

“I went to the end of my path, where there were unbelievable things that appeared as an abyss. Faced this nothingness, I could not move forward anymore. What I can do is retreat and contemplate the path I went through. With every step going backward, I draw a reality in front of my eyes”.

“Between life and death, in the constant crisis, I lit my lantern – the lantern of awareness. Of course, it supports me very well in leading those who follow me on the path I have opened. But its light also drew attention to myself. I have done the spiritual work that I have to do. And now, dear endless magical miracles, please come help me”.

“Little by little, I liberate myself from attachments. I no longer belong to my thoughts. My words do not define me. I overpowered my passions. After separating myself from my longing, I resided in my heart like in a tree hole. My body is a means, and I have seen it grow old, die, and disappear like the unstoppable flow of a river. I no longer know who I am; I live in my own ignorance. To reach the light, I buried myself in the darkness. In order to attain a state of ecstasy, I practice the carefree. In order to achieve the love of all things and beings, I was reclusive in solitude. It was there, in the most distant dark corner of the universe, I opened my heart like a flower of pure light. Being grateful without asking: the nature of my knowledge is essential knowledge”.

“Walking on the path of will, I have reached its highest peak. I was like a fire, radiating heat, then cooling down. Here I am the enlightened one, the summoner, and the one who hopes. I fully understand the loneliness. This prayer goes directly from me to inner God; I will have to face my lifelong past. I waited and continued to wait between the two abysses. I cannot move forward or backward on my own; I need you to come here. My patience is as infinite as your eternity. If you do not come, I will continue to wait here because waiting for you has become my only reason for living. I was motionless! I will continue to shine until I burn myself. I am the burning oil for my lantern; this oil is my blood, and my blood is a call to You. I am the fire and the call”.

“I have completed my mission. And now you are the only one who can continue it. I am a feminine soul, the endless action of passivity. Like a cup, I dedicate my emptiness to it being filled. Because I helped myself, now you will help me”.

The Hooded Man Wildwood (The Hermit, Robin – i – The – Hood, the hermit in the deep forest) will bring persistent light in the middle of the winter as well as use his wand to dig deep and accumulate knowledge.