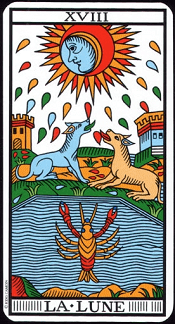 I. Overview of the Moon – La Lune Tarot

The moon is one of the oldest symbols of humanity; it represents the excellence of feminine patterns, the Mother of the Universe. Its core qualities are receptive: the moon reflects the sun’s light. In the Major Arcana card XVIII – La Lune Tarot, we find ourselves in the middle of the night, but it is a night illuminated by this humble reception. The moon is also the world of dreams, a realm of fantasy; and the subconscious is usually related to the night. The Tarot depicts the moon as well as the sun with a face. But it does not look directly at us. It is a crescent moon that looks elsewhere. Although it is forming part of it, the moon is still invisible.

In this regard, the Moon – La Lune Tarot represents the mysteries of the soul, the secret incubation process, which is hidden. This is not the face of a young girl but a face imprinted with ancient wisdom stemming from its orange rays. The red rays on the background interwoven with them indicate the great survival and extremely fertile capacity, this energy is kept and obscured. In the foreground, there is a blue sky emerging, the symbol of spirit and intuition. The moon is connected to the circadian rhythm, water, tide, the monthly cycle, and the transition from life to death.

Beneath this entity, the two animals are facing each other on the backdrop of two emerging towers. These two animals seem to be two dogs, but can also be wolves, or one is a dog, the other is a wolf. They are heading towards the moon, howling and eating it. They eat the color drops that it emits. We can view them as siblings, two children who are waiting for their mothers to feed (materially, emotionally or intellectually), two brothers who love or rival each other.

In the Moon – La Lune Tarot, he light blue animal represents a more spiritual creature. Its green tongue represents receptiveness, its tail is erected, and we should note that the roof of the tower with the opening loopholes, is also easy to receive. The skin-colored animal, which represents material, putting its tail down and has a tongue that works in red. It was in front of the closed tower that did not seem to have a door. At the foot of this tower, we see three white steps implying the first steps into the tower, however, the tower is still closed; even its serrated wall is covered by tight-fitting loopholes, like clenched teeth. From there, we can deduce that the dense physical body is definitely turning to action and has no tendency to receive unless it passes through intellect, symbolized by the light blue animal.

Anyway, we should note that each dog’s ears have additional colors, just like the symbol in the theory of Taoism, Each extremity carries the particle of the opposite one.

The feet of these two animals form something similar to a three-tiered badge of a scene in space separating them. The top tier is dark green, the image of a part where the moon is shining on it, corresponding to an easily receptive mind, immersed in deep thought. The middle tier corresponds to the two standing dogs: two trees are growing on it, representing an emotional life. The bottom part, close to the water surface, corresponding to the deep nourishment of the tangible and sexual aspect; there are three red drops on it, referring to the nature of animals.

The expanse of water at the end of the Moon – La Lune Tarot is squarely like a swimming pool but stirring with wavy lines implied waves and tides. This could also be a harbor. Its shore, at the bottom of the card, is made up of rocks and wild plants. However, we can see that the other side is surrounded by lines, three black lines delineate with two green lines, implying that the subconscious is limited to its edge by the dualism based on reason. At the center of the water that looks like the uterus, there is a crab or shrimp, can be seen as a symbol of the ego which aspires to connect with the moon. This connection has existed: the crustacean and celestial body share the same colors. The crustacean wishes to merge with the moon, and like every element in this card, it does not know that it is communicating with the moon.

We can see the crustacean in the deepest water, or vice versa, swimming on the surface of the water. In both cases, we are encouraged to establish a connection with intuition, we all have this hidden treasure. We can also see two claws carrying two marbles as offerings. The ego has something to dedicate in spiritual work.

Thus, depending on how we look at the Moon – La Lune Tarot, it may represent communication with profound intuition or symbolism of loneliness and separation. We can imagine that this crustacean appears to steal the blue marbles, that the two dogs are fighting with it, that everything feels like being cut off the moon and its spiritual energy. Water droplets can represent the ability to receive, but it can also be, in a negative sense, symbolizing the infinite passion of energy.

Accordingly, the card indicates madness and neurological disorder. If we count the lines around “LA • LUNE”, we will see 10 lines on the left and 12 on the right. The number10 refers to Wheel of Fortune – La Roue De Fortune Tarot: there are also three animals here; however, while the animals in the Major card X, do not find the power to move, in the Moon – La Lune Tarot, we can say that the crustacean and the two dogs are made to move with the attraction of the Moon. The number 12 refers to the Arcana card XII, the Hanged Man – Le Pendu Tarot. He has a strong attachment to the Moon because he represents a pause, spiritual nourishment, a receptive state; But in the Moon, the receptive state is universal. The red and blue drops on the ground are in the process of emerging to climb on the planet. This circulation is an expression of the energy exchange between the Earth and the Moon.

The Moon – La Lune Tarot generally implies the mother’s world, referring to all aspects of the subconscious, intuition and mysteries of creatures. Therefore, we can direct the interpretation into the querent’s relationship with his/her mother, or into the concept of their femininity. For women, this card can be an omen of deep awareness. For men, it is a suggestion of cultivating traditional feminine qualities such as sensitivity, intuition, and the like.

Moon is a good omen for those who wish to dedicate to poetry, for the interpretation of Tarot, for all training based on comprehension. To the same extent, Moon has an echo of dark fears, nightmares, and all kinds of anxiety related to the unknown, sometimes uncontrollable. It may represent vague anxiety, but also represents a voyage through the sea or docked. It tends to favor fantasy, and all mental states generally involve the “moon” or the phenomenon related to the moon. Its endless receptive capacity is a great treasure.

IV. When the Moon – La Lune Tarot speaks up

“You ask me to explain myself, but I go beyond words, arguments, discrete thoughts, wisdom. I am a secret and an indescribable state; I am the beginning of all profound insights when I immerse myself in calm waters and do not ask for anything, do not try to identify anything, you stand outside the light. The more you enter into me, the more you will attract me. Nothing is clear in me. I am endless and every nuance. I spread into the realm of darkness. I am the swamp of wealth; I contain all the totems, the prehistoric Gods, the treasures of the past and the time has not yet come. Overcoming the subconscious mind, I am the creation. I deny all definitions”.

“I know that people worship me. Ever since the human race developed an awareness, they have associated it with me. As a perfect heart of silver, I enlightened in the darkness. I am the light that they dimly doubt, reigning in the depths of their blind souls. Over there, where greedy entities waiting for a tiny ray of awareness, a measure of madness, absolute loneliness, icy delirium, the silence of pain called “poetry.” I realized that to be myself, I had to go to a place where I had never been”.

“I fell into myself, and every time I fell deeper. I lost myself when I slipped into the unknown, until the end, “I” – No more obscurity. Better yet, I am an endless concave, an open mouth that contains the entire desire of the world, unlimited female genitalia, has become an aspiration. And then, in that space, I could finally reflect all the light – a blazing light that I transformed into its cold reflection, not the light emitted but is illuminated”.

“I am not absorbed, I just express. Whoever receives my light will know what it is, nothing more. That was enough. To transform myself into complete comprehension, I have to refuse to give it away. Every ruthless shape of the night destroyed by my light is starting with righteousness. Under my shining light, the angel is an angel, a wild animal is a wild animal, a lunatic is a lunatic, and a saint is a saint. I am an example of everything, everyone sees himself in me”.

The Moon Thoth card leads us into the endless depth of our inner world, and thus, enters the visual world of the soul. It allows us to have a vague idea behind the example through which we adjust our conscious world to adapt to the fear necessary for our safety.