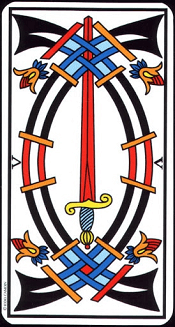 I. The upright meaning of 5 D’épée Tarot

This is the appearance of a new perspective, a new idea. Following the literal meaning, it is represented by the “angle of view” that shows us the two oval rings intersecting on the red sword. Further, the card implies that many other spiritual thoughts will appear. We start learning again; we improve our knowledge or become an expert on something. Wisdom turns into new ways of looking at the world or exploring the inner world without losing its beliefs. This new knowledge can integrate into everyday life to transform it.

5 D’épée Tarot indicates whether you are engaged in a conflict or find yourself in conflict with others, which causes tension and hostility. Even if you think you have won, you can end up losing because you hurt or annoy others and then become isolated.

You try to pick up the pieces and act as if conflicts are behind you, but others have lost faith in you and no longer want to be with you. It may be one of those times when you get the impression that everyone is against you and you risk losing friends. You will have to decide whether your point of view is important enough to jeopardize your relationship with others or not.

5 D’épée Tarot can also represent conquest. If you have been fiercely in your battles, you will soon be able to identify your goals. However, if you are in a passive position, you may have to compromise on your personal interests and achieving your opponent’s wishes. In general, you are fighting and there are more tasks/problems than you think are starting to appear. Everything will not go as well as they should, and you will have conflicts or disputes with others.

Therefore, 5 D’épée Tarot represents ambition but in a negative sense. Excessive ambition without minding the consequences will inevitably lead to a painful situation for everyone. In any case, there is a negative meaning. If you only focus on your goals at all costs, you will bitterly discover that the game is not worth the effort. Pride and arrogance often go hand in hand with a forced win like this. You have overcome a challenge, and you have the right to be proud of it, but you should know that there will be other opponents to face and some of them will eventually win.

Bragging with others is a sneaky invitation to show your weaknesses. If your win has been torn off by cheating or suspicion, beware of the possibility of revenging because this card can also reveal an attack or betrayal caused by someone you trust and you do not suspect they are your enemies. Maybe, there is an unfaithful partner or a jealous person in your life who stabs you from behind. You have to be very careful with whom you trust right now because you are easily vulnerable to attack and gossip.

5 D’épée Tarot﻿ can also simply mean defeat. It shows that, despite all of your efforts, you risk being beaten. If you become discouraged after such a defeat, you are on the path of decay and torment. Instead, accepting defeat, taking a lesson and making sure you win next time. Let’s be smarter and wiser after this setback.

5 D’épée Tarot can also be seen from an entirely different angle: a victory without a future. The advice of it is to choose your own battles. You may be tempted to face each conflict to make sure you are right, to prove that you are right, or to defend yourself when you feel challenged or threatened by another person. However, most experts agree that a wise choice of battles provides a smoother life than arguing all disputes.

The negative aspect of this card refers to the discord between materiality and spiritualism, religious dogmatism when it opposes internal evolution, cruel criticism or hypocrisy views, and trickery.

As a card of contention, tension, and disagreement, it shows that you really want this argument to end, to forgive and forget, then focus your energies on more constructive activities and return to a normal relationship. The conflict is escalating, and you realize that you may be the loser in this battle. You now want to relegate this to the past and move on. Thus, reversed 5 D’épée Tarot means that you are more open to change.

The debate is over and you are ready to look at the situation with a fresh view. You are ready to lay your armor down to start negotiating, honestly trying to come up with a win-win solution rather than always taking the lead. It is a good time to reach out to whom you have recently had conflicts or disagreements and to make amends.

The reversed card can sometimes indicate a conflict in your life that you have tried to escape but it continues to follow you. For example, there may still be an ex in your life that makes things difficult and prevents you from moving on. If there are arguments, tensions, and raw emotions, you should avoid this person and this situation.

Likewise, reversed 5 D’épée Tarot can mean that an old wound has been reopened, and you still feel the fear and tension associated with that memory. You may be particularly concerned that the story repeats itself or worried about being hurt again. It may imply the desire for forgiveness and forgetting to be able to move forward. You may also have a residual grudge following a recent or past dispute with a loved one. This dispute may still be unresolved, and this has an impact on your ability to continue a harmonious relationship.

The reversed 5 D’épée Tarot serves as a reminder that sometimes it may be appropriate to disregard the opinions of others. From time to time, you simply can not please everyone and, unfortunately, some friendships can be lost along the way. You should that not everyone will be so accommodating with your desire to pursue your own goals, especially if it affects them and prevents them from living their lives as they wish. You will have to accept that you cannot please everyone.  If they become angry because you do not usually stay there for them, that is their problem.