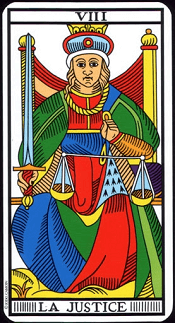 Justice – La Justice Tarot, number 8, represents perfection. This is the top of even numbers. Following the accumulation of number 2, the setting of number 4, and the pleasurable discovery of number 6, number 8 reaches the level that has nothing to add or subtract. Number 8, an Arabic number, is made up of two overlapping circles: perfection in Heaven and Earth. According to Tarot digital science, this is also the double of number 4, and therefore, some double squares: stable both in the material and mental world.

As a symbol of satisfaction, Justice – La Justice Tarot balances our lives with her scales. But balance and perfection are not synonymous with symmetry. Just as the sacred art of the cathedral builders that remove symmetry because they consider it is evil, the Justice card is structured asymmetrically. The pillar on the right of her seat is higher than the other one and on the top, there is a small yellowish sphere that the left column does not have; her necklace lifted higher to the left; scales are not located on a horizontal plane; and her sword is not parallel to the axis along her throne.

If we look at the motion of the scale, we can see that Justice – La Justice Tarot is acting on it with the right elbow and left knee. This trick can be explained on many levels. Of course, it can be seen as a negative sense of injustice, artificial perfection, and deception, which will be defended by some kind of explanation. It is also conceivable that by this gesture, Justice is calling us to stay away from perfectionism: requiring perfection without humanity because the perfect thing is fixed and cannot be better, so it was like a dead thing. She invited us to replace it with divine tricks, by the idea of excellence that allowed our actions to be vibrant and potentially perfect.

Finally, it is easy to understand that the unequal nature of the scale shows instability with Nature, and she is supporting it from divine tolerance. In this sense, Justice – La Justice Tarot, from the depths, is humanistic. Her skin-colored hair and her sloppy clothes connected her to the ground. But she is also the intersection of humanity and divinity. The white ribbon in front of her forehead symbolized her contact with divine purity, and the red-yellow circle in her crown as if it had a third eye implying that her actions are guided by the view of the upper things, something she received from the universe.

Sitting firmly on the throne, Justice, with dynamic traits (like a sword) and receptive features (like the scale), is the first character to look directly at us, just like the Sun and the angel in the Judgment card looking at the reader. This is the way Justice invites us to come to the introspection and dives into the present. This Major card thus removes the traditional visualization of Justice with closed eyes; her gaze caught our gaze like a mirror of reflection, and like the call of awareness.

This card is first and foremost involved in self-justice for ourselves, and give ourselves what we deserve.

Beneath her right elbow, there was an array of violet-blue and was the largest purple-green array in the entire Tarot deck. This extremely rare and mysterious color is a symbol of wisdom.

Intelligence makes her feel touch. The light blue color emanating from her scale plates meant that she was measuring our spirits. Similarly, her sword is also imbued with this color because it is used to cut off our abundant and separate ego from the useless. With the hand holding the scale, Justice – La Justice Tarot is carrying out a sacred gesture with four fingers, representing centers that govern the human (thinking, emotion, desire, physiological needs) gathered at the thumb. Here, the Major card VIII is transmitting the message of the union.

The nine triangles pointing upwards looked like bird feet on her cloak remind of the ecmin ratel, the royal symbol. The nobility mentioned here is the nobility of divine wisdom and flawless action.

In this sense, Justice can be seen as a witness to our inner God, who urges us to judge ourselves without being fake: are we fair to face ourselves? Are we benevolent with ourselves and others?

Justice – La Justice Tarot, the most approachable incarnation of the great female prototype the Moon (XVIII), will often represent the mother or pregnant woman. This card also opens up spaces for strong defensive reflexes: it may refer to an authoritarian character, throwing away the maternal nature and destructive decisions. It also represents the need for perfection, and this need is so strong that it obstructs the reader in the process of understanding it and prevents him/her in advance so that he/she does not make mistakes. Similarly, Justice often refers to state institutions (such as courts, police, administrative agencies) where once a decision has been made, it is impossible to resist and places that make the main subject of the reading feel threatened with punishment and guilt.

On a positive side, her qualities of balance, her spirituality (she conquered some double square physically and mentally), and her clear ideas when faced reality may be valuable allies. The lesson Justice wants to communicate through her sword and scales is to give yourself exactly what you deserve while resolutely getting rid of what you do not want. She taught us how to say yes and no, how to distinguish subjective and objective assessments. In order to achieve this, she knows how to put herself in the situation of others.

“There, where the spirit is in the same place as the material, is where you do not know whether the molecular density is the source of ether or ether is the midwife of the density, there, in this infinite and eternal balance, is my place of residence. The satisfaction of the universe is my justice because it gives every galaxy, every sun, every planet, and every molecule the position that they deserve. Thanks to me that the Universe became a festival. Every birth, every spiral, every star has its place in this universe. I allow every living being to be itself; each dust particle, each comet, each human being deserves to fulfill the task assigned by the Supreme Law. The slightest deviation from this ordinance will cause me to declare supreme punishment: The wrongdoer will be expelled from the present”.

“The good thing you do for others, I will return to you. What you do not give, I will take yours. When you sabotage, I remove you. I am not only targeting you physically, but I also erase all traces of you in the memory of the world”.

“When I appeared in a woman’s body, she became a real mother. Childbirth is to make room for endless awareness in what is here and now. I, the common mother, have my place on the explosive and immortal crossroads where the material ocean is bounded by the infinite soul, which disintegrates like the rain to bring life to every dense debris”.

“I am perfect without adding or subtracting: all I have been given, I have had enough. Everything you took from me from the beginning did not exist in me. Every moment is fair and perfect. I remove all subjective intentions from the action. I allow everything to be the only version of myself. I give each thing what they deserve: for wisdom, it is emptiness; for the heart, it is full of love; for sexuality, it is creative joy; for the body, it is prosperity, not something other than health; for the fifth element, Awareness, I give it the core, which is the inner God”.

The Stag Wildwood Tarot is the king and guardian of the forest. He is half-human and half-animal, surrounded by greenery. His gaze is very steady and calm. He holds a shiny hatchet and a shield in his hand.

Justice Linestrider reflects your search for truth and represents the results of your actions and the consequences of your decisions. Justice in a Tarot spread shows how long it takes to make a decision.