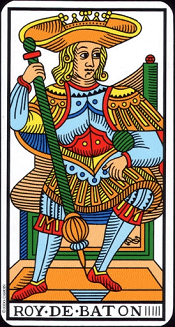 I. The upright meaning of Roi De Baton

There was a large scepter leaning against King’s leg and heading down to the ground with the other end touching his hat. Like every King, he mastered his energy: full of vitality, creativity, and sexuality. He can be a famous artist or a creative person in every activity of life, a person of strength, a sincere lover, a warrior, or a martial arts master.

Roi De Baton represents all the purity of the energy of Fire. Unlike other Court cards, it is hardly influential in the areas of creation, inventiveness, or in the implementation of ideas. Instead, he is more inclined to adopt a concept and change the world to fit his vision. As such, he is a natural leader for all kinds of people and is very visionary. Once he sets a goal, he sticks to it and makes sure he can reach it with the support of his entourage. People naturally gravitate around this King, knowing that he will move things forward effectively. His talents as an influencer are recognized, he is, for example, able to help colleagues to work in his place.

This card seeks out the challenges himself because he enjoys the natural rush of solving a difficult problem and finding a solution that not only benefits a person but all of his entourage. Throughout the process, he gets rid of not only his own fear but also that of others, assuring them that they will reach the summit. He is not just saying because when things get complicated, he is ready to work hard to complete his approach. He shows deep and innate respect for others, and his compassion extends far beyond. He knows how to make the best of others and encourage them to realize their visions and goals, which he knows will benefit the entire group.

Roi De Baton means you are a visionary and ambitious person. You do a lot of things because you are realistic about your future direction and how to get there. You do not waste time with activities or relationships that you think do not lead anywhere. You do not just follow the current nonchalantly, you prefer a solid and uncompromising path. This card advises you to apply a moral life strictly, whether now, in the mid-term or long term. Even if you face difficulties now, this is only part of your journey that will lead to something much more positive. In the end, you will see this episode as a little outdated anecdote that will simply make you stronger. Thus, stay focused on your long-term goals.

The appearance of this King card also means that there is a potential opportunity which you have the power to take up. You are the determining factor in the situation, and circumstances will evolve in the direction you want. Indecision or doubt will be inappropriate responses while lucidity and trust are required. And magically, as you evolve in this new role, you will feel more and more at ease.

The negative aspect of Roi De Baton is that he can sometimes be arrogant or even aggressive in his race towards his goals without being aware of it. For example, he may neglect to seek advice, and he may from time to time make things worse by doing what he thinks the best. In addition, once at the top, he can easily get carried away by his newly acquired status and glory.

He demonstrates determination and vision to accomplish his ambitions at all costs, and while he is often a respected leader, he is sometimes willing to let others down to achieve his own dreams and priorities. This King could also easily become so accustomed to being the center of attention so that he could hold on to a strong relationship with people to make a permanent profit.

His negative aspects can be autocratic, bragging, or a strong sexual activity that comes from love. Then, he could be a seducer, a tyrant, an artist who has narcissism.

Roi De Baton in reverse can make rash, hasty and impulsive decisions. This person can be dominant, invasive and sufficient at times. It rarely does it maliciously or with the intention of crushing others, it is just a predominant trend of its character that sometimes takes control. King does not usually realize when he crosses the red line between assertiveness and aggression. In the worst case, this reversed card illustrates the most selfish and ruthless features of the fire element. He may designate a manipulative commercial contact that will use you as long as he needs you. That can be a rival, a competitor or an unscrupulous opponent.

In love, he represents a clever seducer that could devastate. Its flames are bright and warm, but they disappear quickly. It is only suitable for temporary connections, holiday or short meetings. As an aspect of yourself, this card can mean that you have set your expectations too high that you may be hard-pressed to touch them. As such, you may feel bad because you have not been able to achieve everything you want in life. Let’s set more realistic goals and know that you cannot do everything or please everybody.

Roi De Baton in reverse indicates that you may also be frustrated by the lack of progress in your efforts, especially if it comes from your dependence on others. You may find that some people are holding you back and preventing you from fully realizing your dreams and goals. You may also need to be a little more lenient towards others and aware that not everyone has the same energy and motivation to achieve results. Instead, accept what they have to offer but do not expect too much.

“My finely sculpted scepter which has the same length as my whole body: a tool to show the supreme power that I use as a warrior. My King Apparel is an armor that shows my strength. I conquered and possessed directly and simply, without frills. I ignore the diplomatic and political strategies. Speaking of conquest, I act. I dominate. I embrace the power of life and death more than anything else. Speaking of creativity, I have no doubts. Courage is not a difficult problem for me. I never let my power be suspicious. It is my actions and the works that define me.

I built it very quickly but it was easy to break. The discussion does not exist in my kingdom: my will speaks up. I come from the people, and they give me strength. If I was an emperor in the world’s history, I would be a great dictator, a great conqueror, a great murderer, a terrorist, or a military leader”.