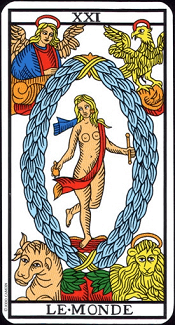 I. Overview of the World – Le Monde Tarot

Le Monde Tarot carries the number 21, the highest value of Tarot deck. It represents supreme awareness. In the card, we see a woman dancing in a blue wreath with a decanter (receiving element) in her right hand, and chopsticks (dynamic element) in her left hand. Like the symbols in Taoism, Yang supports Yin and vice versa. The scarf (on the back of the head) draped over her and turned red. Although it is undeniable that this character is a woman, this is also a merger of elements (recognize the bisexual) that she implies.

As the final stage of the path in the Major Arcana, the World – Le Monde Tarot is a recognized call in its deepest reality, as well as acceptance of fullness and awareness. This is also the time when we, liberated from self-destruction, begin to dimly recognize the suffering of others and place ourselves in the position of serving humanity. Traditionally Christianity, Jesus, the Virgin, and the Saints are sometimes portrayed in this way, in an oval shape. The Mandorla figure, the Italian name of almond shape, is both a symbol of eternity and a hint to the female genitals. We can see this card as a rediscovery of the unity of the world in its Whole.

This also suggests a philosophical egg mentioned among other things of the Turba philosophy: “the art of alchemy is compared to an egg in which four things can be found: The eggshell is earth; the egg-white is water, the outer shell membrane is air; the yolk is fire”.

We have seen that the method of Le Monde Tarot is a realistic image of the Tarot structure. The four creatures framed the woman in an oval shape, as four basic energies harmoniously united to serve the central image. In Christian tradition, angel, bull, eagle, and lion represent four missionaries. These four elements appear as the basis for understanding the four suits, or the symbols of the Minor Arcana.

The skin-colored animal in the lower left corner of the card cannot be clearly identified as a horse, castrated bull or bull, in any case, it is also a representative of a gift, aid, sacrifice. We can also see the growing point on the animal’s left eye as the only horn of the unicorn that, during the Middle Ages, was seen as the symbol of the conception of the Virgin Mary. Here, once again, this animal, therefore, symbolizes chastity, the symbol of the Pentacles. Contrary to the other three elements, this animal does not have an aura because it does not have the same eternity. Similarly, the Pentacles, unlike other suits, do not have numbers. In the Le Monde Tarot, physical and tangible energy reaches its integrity. The body is ephemeral but it is washed away from all stains. Awareness of material life can embody in the image of a sports champion or important match.

The other three elements are common elements: angels represent the perfection of emotions, sacredness and a heart that is full of energy to give away (Cups). The eagle, with its aura on its head, can symbolize the fulfillment of the mind and spirit, also an empty place that cannot be determined by words (Swords). The lion which also has the aura, represents the climax of creative energy and desire, a sublimation that leads the wild potential to conscious creation, an image of the hero who sacrifices himself without hesitation (Wands).

The four energies shining around this center were completely realized. Inside its blue egg, there is full of awareness and love for the whole universe. The central character is dancing while looking at the left, towards the receiving side. Her feet were on the red ground, on which six plots of soil were plowed: energetic activity was done with satisfaction, the world was accepted as it was with full awareness. Beneath this energetic land, almost obscured by two crisscrossed pieces, is a white egg. This egg, as we can see, is the egg of the High Priestess – La Papesse Tarot, being hatched under its full potential. When this cosmic egg hatches from our spiritual activity, we touch the World – Le Monde Tarot. This card can represent the ego, a universal agent in all things and connect us to all things.

Because it is located at the last point and in the completed position, the World – Le Monde Tarot refers to critical awareness. It is a perfect woman, a soul filled with joy, a perfect world, a happy marriage, a great success. This card also inspires travel: literally exploring the world.

Like the Tower – La Maison Dieu Tarot can remind the penis during ejaculation, this card refers to the female genitalia, expressed by pleasure (orgasm) or an individual (the pregnant woman).

On the other hand, if Le Monde Tarot appears at the beginning of the argument, it will represent a difficult beginning: awareness requires any action beforehand. This card is not in its place and becomes confinement. Then, we can then look for traces of experiencing the first injury in the uterus or the birth of the recipient of this interpretation; that injury has hindered future development. If we want to avoid such speculations, we will need to pay attention to the end indicated by this card (that appears at the beginning of the spread) and wonder how and why this person “stuck in his/her shell”.

IV. When the World – Le Monde Tarot speaks up

“I am there right in front of you, around you, and inside you with immense joys. I am a perfect creature. Nothing inside against me. Everything is in a completely unified block. Everything is in its place; I am a vulnerable Consciousness; I am a relentless dance of the Whole. Who does not know me will say “no” when the whole universe says “yes”, and the refusal of my immense acceptance leads this individual to helplessness.

But the individual becomes pure and sagging, the person who allows me to enter, will dance with me and say things that I say. This person will have the love of all things, thoughtful thoughts, great dreams, and extraordinary life power”.

“If you touch me, that is, you develop me in yourself, you will taste the ultimate happiness, be happy to live. To achieve this, you must dissolve in my presence like a burning jewel. As four rivers return to one of their sources, leaving behind blind bees, your concepts, to melt in my joy; leave behind your feeling to immerse in my endless joy; let’s give me a hysterical crowd of your desires, let them be enriched, as a sophisticated item, my ceaseless creativity. And let your whole body with all its inevitable needs obey the clarity that drew me. Then, you will master your world. Inside your urge to sex, there will be no more rebellion, your desires will not submerge you, your thoughts will not destroy you, and your body will not cause obstacles to your life. You will be satisfied and united with me in the dance, in joy and endless praise”.

“I am a flower of contentment which is always born in the abyss; I represent the realization of every dream, a soul without which the world is no longer the world but the arid desert, the end of hope. I am the goal of every path”.

“Like a virgin, I bring God in my gut. I am the expression of the sacred energy in Fool card. I am the World that God created and He will love it”.

The World Rider Waite Tarot Card can signal that you are really feeling the weight of this world over your shoulders, which means it is not a pleasant state. This is the best time to see how well you get help when you need it. Remember that you do not have to do everything yourself.

The World Deviant Moon Tarot manifests the supervising wisdom which sustains life on this and all worlds. In most Tarot decks, the image of a woman has become our standard World image.

When The Completion Osho Zen appears, we could be able to perceive the whole picture, the combination of small pieces that have caught our attention for so long.