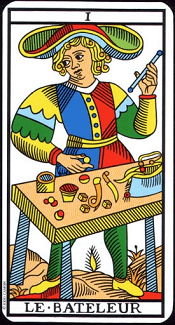 I. Overview of the Magician – Le Bateleur Tarot

The Magician takes number one. This character contains all potential; it is like the starting point from which the universe appeared. For the Magician, everything is possible. He had a range of elements displayed on the table in front of him that he could use every time he wanted, and a small bag that was not difficult to see and seems to be an endless bag, like the goat horn with fruit (symbolizing abundance). From his table, this character works towards the universe and spiritual life.

Although being described as an image of a male character, the Magician – Le Bateleur Tarot is a bisexual individual who works with both light and darkness, from the unconscious state to the supernatural. He was holding the wand on his left hand while his right hand held a pentagram belongs to perception. This gold coin, which is a miniature sun, symbolizes perfection and truth, but it also tells us that the Magician does not ignore daily necessities. The blue wand in his other hand is trying to capture the cosmic force. We can also see a leather object here, which looks like a sixth finger that will find its symmetry in the second decimal string, in the sixth toe of the Strength. This sixth finger may be a sign of ingenuity and his skills in arranging reality which is in accordance with his intellect, however, still maintains the mysterious nature. This character may be a true magician, who is hiding something under the table or, on the contrary, an initiator.

His table has three legs. It is understandable that the fourth leg is placed outside the card. By surpassing the ability, turn to awareness of the action and choice that the Magician gives to his state of expression. But we can also see that 3 is the number of the mind, and light blue is the color of spiritual awareness. Likewise, the Magician’s yellow shoes imply clever contact with the Earth – which is full of love and humanity – while receiving the summoning of divine power. This is the spirit of finding ways to position yourself in the human world and seek solutions for material life. Therefore, it is this card that will evoke all questions related to job, task, and careers.

The small yellow tree between the Magician’s legs could be the genital organ of Mother Nature, which gave birth to him: he went down from another direction to search for the world, his realm, the field of activity, art, ideas, love, desires. He will satisfy his needs, cheat, become knowledgeable, and start living. We can see three dice on the table, each showing three faces: 1, 2 and 4. Therefore, each dice gives us a value of 7, and if we add all three dice together, we get 21, which is the highest value of the Major Arcana (XXI the World). Therefore, we can say that the Magician has all of Tarot to use and the overall awareness of the World. Similarly, he has four Minor suits (a pentacle, a wand, a sword, and a cup) disguised between items used in magic tricks. This indicates that we achieve the truth by going through illusions.

There is an orange object in the shape of a snake in the same position as his groin, between the dices. He puts sexual energy (or kundalini) right in front of him, and he can control it. His hat depicts the beginning of a spiral. He came from the invisible place because he represented the first point; he emerged from the void to take the first step in the world. The hat has a sacred cord (yellow) that appears from his hair, the mental realm, and the opening to merge once more time with the sky in union with the universe. The intense desire to achieve this unification is symbolized by the red rim of the hat. Perhaps, his purpose is to control to make personal awareness immortal. There are small orange orbs (eight fruits) in between his golden curls, symbolizing enlightenment and indicating that he is aware of perfection and fixes it as his goals. On the psychological level, he can also be considered a young man, who is always filled with his mother’s ideas (no. 8 represents Justice, a mother character).

Magician’s belt is doubled. If we consider it as a symbol of will, from it, we can deduce that he has the ability to apply his will to his intellect (the above part) and to his nature of animality and flesh. From another perspective, this duality indicates that he is not fully aware of his nature; provided that one is conquered by dialogue within him, otherwise, enlightenment and truth will not exist.

The Magician Le Bateleur Tarot refers to the beginning and quick arguments. The cunning and talent are not lacking; all that remains is to get down to the business. This card also shows the necessity of choosing and deciding to farewell the fact that “everything is possible”, which is a sign of youth.

In the family or the spiritual world, this is a boy, who has not changed even after forty years, a boy that should have been so if he was not born as a female, who had been raised by a nurturer and a boy who met a person and with him, who was preparing to be together, from which everything is born.

The Magician points out that everything is possible, that a new beginning can be made and that nothing can resist the originating of a new action. His wand represents a request for help or inspiration that awaits to be filled by a more mature force, or perhaps, by the process of maturity.

Although he was the first person in the Major Arcana and the initiator because of his own abilities and powers, the Magician still had a path to go ahead. This is the card of unity that must choose a way to act.

IV. When the Magician – Le Bateleur Tarot speaks up

“I am in reality. This is the time to perform any action I want to take. My whole future is planted in the decision I made at this moment. Do as I do: look back at all the moments when you are not yourself, where you are not living in and it is the time of immortality and the place of infinity. What are you waiting for? Let’s throw those useless burdens away, they are just remnants of the past and the fear of the future. I am the embodiment of energy called Consciousness. I am totally here, in this body, in other bodies, in a certain space and time”.

“I am not separate from my surroundings. I am aware of the fascinating variety of everything. I invite you to experience it with me. Be aware of all the spaces, about every problem: trees, planets, galaxies, atoms, cells. If I am aware that I am not merely a limited mind within a certain shape, I will become the Master of divine activities”.

“How does a person become conscious? It is simply: you are not bound in the past or in the future, nothing but a moment, a universal moment. You should break once and for all with every deviation in the ego and old wounds. You need to separate yourself from every plan, all suffering, all programming, only then will the light of Consciousness come. If you are living for yourself at this moment, death will not exist. You endure loss in the past and you can endure more in the future, but here and now, nothing is lost. Perhaps, you crave to improve yourself, to improve your life, but at this moment, there is no desire. You are there with all your potential”.

“I, the Magician, are standing at the crossroads of eternity and endlessness that we call the present. I am faithful to everything in me: my body, my mind, my heart, and my creative power. The mundane table has three legs that originate from the ground; I anchor myself somewhere in diversity, and it comes from the point of view that I act. In my countless possibilities, I have chosen one, my gold pentacle, the pulling force will lead me to the Whole”.

The beginning – Magician – Cheater – Player – Something hidden under the table – New organization – New studies – Professional innovation – Starting a relationship – A boy or a masculine girl – New young boy comes into life – Wiseness – Convincing art – Many talents – You have everything you need to act – Need help, guidance – “Desire, Courage, Ability, Obey”- An option to perform – Indecision – Many potentials – Excitement of the Subject of Tarot reading, Men and Women – The beginning of the yearning for intellect – The initiator – Spiritualize the problem.

The Magician Linestrider is a powerful card related to perception, action, and creativity. He can come up when you have a specific idea or goal you are working on for it. The Magician is related to the Mercury in alchemy and with the number 1 and also is the card of initiation.