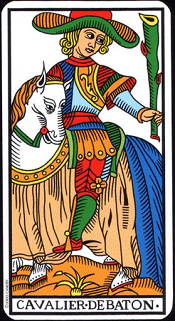 I. The upright meaning of Cavalier De Baton

Riding on a white horse, symbolizing the desires of being controlled, the Knight of Wands has tamed his horse and could force it to turn. His scepter has returned to its nature: creative energy and sex are felt as simple as themselves. The scepter in his hand as if to show that there is no duality existed between him and his energy source but complete trust. This card represents the oriented instinct, the maturest creation, the supreme courage to life and death, peace, healing ability, or even a sage who is willing to give up the pleasures of humanity to enter the kingdom of thought.

Cavalier De Baton reveals the implementation of a new idea. Many actions are taken by this rider who invests all of his energy without hesitation to ensure that his ideas will be applied. His courage is incredibly tenacious, and he is afraid of nothing. He is willing to exploit his intentions and visions to make things happen. Thus, this card means that your confidence level will increase quickly, and you will feel ready to face the world. Let’s take up all of the challenges that stand in your way and always be ready to support those who lack determination and vigor.

This Knight represents the sort of fellow who acts right away without thinking. He is impatient and impulsive with unshakable faith. The disadvantage of this card is that when he overflows with energy and enthusiasm, he tends to rush without much concern for the consequences of his actions. He embarks on a headlong journey and often crashes for lack of a clear plan of attack, which can have a negative impact on his chances of long-term success. He is so driven by the desire to be the best for glory and notoriety that he almost forgets to prepare in advance and keep an eye on reality.

Cavalier De Baton can also be considered aggressive and overly ambitious. He insists a lot, even if others obstruct, criticize or challenge him. When you get this card in a spread, it is important to start your creative projects with a lot of enthusiasm and energy, but also to temper yourself with a realistic vision and a carefully considered strategy taking into account the future consequences of your actions. There is nothing wrong with being ambitious as long as it is channeled properly. Let’s be a pioneer but take only calculated risks.

This card can also indicate an event that happens in your life quickly and unexpectedly. An important problem is likely to occur in your life and to demand your attention until its resolution. Rather than resist him, take the time to give him all of your vigilance. Often, this Knight card may indicate a hasty change in residence, work or any other lifestyle. You must be ready to react quickly and follow the current flow because any resistance will be useless.

The reversed Cavalier De Baton announces delays, frustrations, dead ends, and anger at obstacles and failures. It represents a loss of personal power or the negative use of power. This may mean that you are trying to hide or compensate for your inability to control the situation. The emotions that come along can lead to a loss of self-esteem and an excess of pessimism. This card in reverse is impulsive, agitated, impatient, and lacks clairvoyance. He is so eager to devote himself to his own activities. If it were you, you would have to be very careful not to rush into actions without thinking. Even if you start to get frustrated by the lack of action, you must anticipate all the consequences before acting.

The reversed Cavalier De Baton also represents someone in your life who must go through these mistakes in life to learn and improve. Counseling or retaining it at this point will not help. It also means that you risk acting impulsively and doing or saying things you may regret later. You want everything to be settled right away and goes as planned, but you seem not to spend time thinking about what is best for you. Let’s be careful not to react incontinently to everything that happens, but to review your situation a while before taking action. You may also feel frustrated that some seemingly out of control factors are affecting the situation. Again, remember that there are still things that you can control and modify.

“When I was Page, my symbol was on the Earth. Since then, it has risen to the sky, to the development of the soul. I do not separate myself from it; it rooted in my hand and develops on its own. The animal I rode on, a huge and strong horse, has white fur, the color of purity. It symbolizes the grandeur of my desires. I, the knight manifested its will, turning it from right to left, from action to receptive. I have learned to go around the path of destructive energies to the life of the mind.

My energy, separating itself from complacency, from the temptation of tyranny, and from the animalistic battles, has become immense. Through an act of supreme will, my animal nature, this white horse, was condensed, turning into the red sword of the Knight of Swords. I represent the moment when Eros becomes a beautiful spring for the mind”.