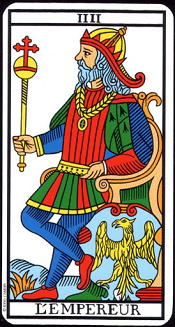 I. Overview of the Emperor – L’Empereur Marseille

The Emperor- L’Empereur Marseille takes number 4, combined with stability like the shape of a square, which is a symbol of material guarantee. The four legs of the table and the altar of the church also has a connection with number 4. The number 4 is unlikely to collapse unless there is a major revolution. Number 4 is also four Hebrew characters (Tetragrammaton), four letters that make up the holy divine name for Jews: Yod-Hay-Vav-Hay. We can see a cross with four branches on the Emperor’s chest. With it, the laws of the universe are set up completely and completely.

Tarot’s return has made it possible to rediscover the fact that the Emperor’s eagle is sitting on an egg. This detail, which had been erased for centuries, was of fundamental importance for understanding the Major card IV. Like the feminine but masculine Empress, the Emperor is escorted by a comprehensible eagle, also in an incubating state like the High Priestess. Is he absorbing her power or supporting her? The interpretation will vary and depend on the reader.

The character in this card (L’Empereur Marseille) is depicted in a sitting and stable posture, or, on the other hand, standing on his throne, ready to act if he wants. He is the power while in a still state. He felt no need to be excited and adaptive because he was in the process of strengthening his power. He did not need much more effort. His crossed legs created a small white square, which confirmed his state of material roots.

We can also see that his left hand is smaller than his right hand. Being passive and receiving, this left hand was touching the double belt like the one of the Magician. But the Emperor – L’Empereur Marseille was in the process of achieving the union of the opposite sides of intentional action. His reality must follow him; he is the master of controlling his territory, his body, his intellect, and his passion. In his right hand, the larger and more active one, he firmly grasps a scepter which is reminiscent of the one of the Empress. But Empress, with the orange scepter, taking action in the dark while the Emperor acts in full daylight. He did not perform power beyond his courage but based on the laws of the universe, which he forced to respect. He did not need any support for his scepter; it attracts its power from the cosmic axis. Like the Queen cards in the Court suit (or characters) of the Minor Arcana, he looks directly at his powerful object.

The legs of the Emperor – L’Empereur Marseille, with red shoes, remind us of the Fool’s legs. At this moment, they still exist, but they only go on a spiritual path (shown on the light blue ground). His beautiful throne shows the subtlety of his mind. On his left shoulder, we can see the symbol of gold, of knowledge. His head was crowned with intelligence (shown in the yellow color of his hat, on which an orange compass could be seen) and the sun’s rays at the red rim. His light blue hair and beard symbolize his spiritual experience: the power he developed is not only material. Furthermore, we can see in the position of arms and hats, there is a triangular diagram, the symbol of the mind, right on the square, which is created by the crossed legs.

The wrinkles on his neck form an E, which can also be read in M. The white circles in between his throat and beard can form an O. Based on this explanation; if we really expand it, the Emperor’s throat will be filled with Sanskrit syllables with the sacred meaning of OM.

There is a golden chain shaped like wheat wrapping around his neck, a sign of pure thoughts, on which hung a large medal decorated with a green cross, creating a combination of horizontal space and vertical time. The Emperor – L’Empereur Marseille is completely focused here, in the present. This is how he works.

The Emperor – L’Empereur Marseille had no difficulty representing the father character as a central element of the personality. The direction he is looking at can guide us based on the center of concern with a father: is it pointing towards the family, or outwardly? Looking forward to his daughter, his wife, his son? Or is it directed to his parents? Being skillfully arranged, the Emperor evokes a stable companion, a guardian, and a balanced home. For a guy, it can also raise questions about masculinity: how is it inherited by the father, what are the means to satisfy oneself as a man in reality?

Questions related to money and economic guarantee are also relevant to this card. They refer to the ability of a person to be the owner (or boss) of material life, the ability to have the means through which a person can secure his or her property.

When the Emperor – L’Empereur Marseille appears during a spread about spiritual questions, the Emperor can refer to a character who ruled and dominated, God, visualized here as a father, as well as relationships maintained by reason that square with all aspects beyond it.

As a person who holds power in the world, the Emperor is depicted with a portrait of an angle. Perhaps, his gaze was so strong that it could disintegrate us.

IV. When the Emperor – L’Empereur Marseille speaks up

“I am the guarantee. I am a strong embodiment of violence. When I am speaking within you, you will know that weakness will not exist. As long as you do not see me, then you will only know the insecurity. You will not have the power to perform or do anything, to express or resist yourself: you are a victim. But with my presence, your fear will be gone. You will stop suspicion and reducing your self-worth. No one can force you to do what you do not want to do”.

“My law is the laws of the universe in progress. If we are not against them, they will remain peaceful. But when we disobey them, they become brutal. I have the ability to eliminate the disease, heart attacks, tumors, or cirrhosis within you. If you do not follow the rules I have created, I can destroy them all. I have the right to kill and destroy. But if you get sick and I live in you, I will bring you through your pain and suffering, destroying all obstacles. I am health hidden in a sick body“.

“I am invincible. I do not hesitate to conflict: I will be the one to start the fight. I will never accept defeat. No one can dethrone me”.

“I am a shaft. I organized, arranged everything around my rule. I make everything in order to reign, the most gentle to the most intense. When I am in you and you see another Emperor, we will combine our forces. There are no competitors, there is no competition or battle between Kings. I am a unique prototype, residing in each of you”.

“When I embody inside your body, you will enjoy a complete balance, and you cannot afford to stumble. For me, the body is the center of the universe. It is supported by a tremendous force and capable of facing anything. I was extremely calm. When I embody in your mouth and muscles, your words will become accurate, and you will not be afraid. Everything in you is pacified: organic processes, thoughts, desires, hearts, memory, time and space”.

“Your intellectual hesitation, your shyness, and your default in the role of victim, your past suffering, your self-righteous image cannot prevent you from looking for me, your Emperor. If a malicious education or a system of negative values imprinted the wrong rules inside you, wipe them out! Set up your rules, your working system, your actions, by the rules I reveal to you. I was there, I appeared, and behind me, there was an army — the sun, the stars, the galaxies. I protect you and urge you to develop your strength”.

“I am a warrior within you who sees your weaknesses and who is not weak at all”.

The Green Man is a symbol of a glowing heart where the masculine aspect of nature presents. He is one of the oldest figures, showing the connection between human beings and nature.

78 Tarot Card base on Marseilles Tarot