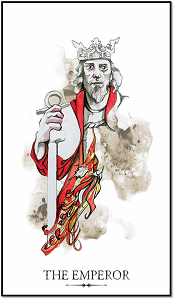 I. Keyword by The Emperor Linestrider

II. Meaning of The Emperor Linestrider

While other cards like Empress and High Priestess urge you to look into the subconscious to see the answer, the Emperor (like the King of Cups) lets reason dominate the heart. If you are dealing with complicated choices or situations, now is the time to resort to practical experiences, knowledge, and well-documented material.

This card inspires you to bring out the attitude and confidence of the Emperor. In some cases, it may be saying that you will interact with an Emperor and that the best course of action you should do is to dedicate your professionalism, capability, and awareness – these are qualities that an Emperor will respect and cherish.

III. The Emperor Linestrider in a Tarot spread

In a Tarot spread, Emperor Linestrider often represents a strong and controlling man in your life. This is especially true if the card shows up in a past position. He could be the father, boss, brother, or teacher who influenced you and your current path. With a spread regarding business, the card can advise you to put your emotions and concerns about relationships aside and focus on data, facts, and a clear analysis of the situation. Organization and rule are your most valuable assets at the moment.

When combined with the Swords suit, the Emperor Linestrider refers to our mind’s control over all things, as well as the need for a data-based approach to future decisions. In terms of work, if you prepare to startup, you will meet an experienced and qualified superior who will guide and assist you. At times, this card shows you at work as a leader who takes responsibility and makes decisions. Another case is that you are working with a great boss who is strict but will support you wholeheartedly.

As for friends and associates, Emperor Linestrider refers to the “big ego” that might be yours, or that of a friend, that could lead to a contrariety. It also indicates the hidden jealousy of those who come to you just for money and reputation. Besides, you may be proving yourself at work but encounter hostility and isolation from colleagues. It would be wise to focus on your work, but don’t hesitate if your benefits have been violated. This is no time to yield.

Regarding your family, the card shows that you care about your family but do not know how to express it and vice versa. Stubbornness, anger, and lack of empathy can worsen conflicts within the family and between loved ones. Sympathy and tolerance for the mistakes of others will cause all anger to subside quickly. However, being yielded and understanding here do not mean to remain silent, but a timely expression when family members have been collected and able to share feelings with each other.

When coupling with Pentacles cards, financial matters are at the top of your life. Spend and invest based on evidence rather than sentiments. The card also gives you the advice to control your finances. All spending must be carefully calculated and you should focus on one particular goal rather than multitasking. If you want to borrow some money, this is not the right time. It also suggests you not to lend others because retrieval will be difficult and conflicting. The Wands cards show that it is time to take action and take a decisive step. Are you planning to expand, develop, plan new journeys, or invest somewhere? Now is the time to be determined and take action.

This card becomes the most complicated when paired with the Cups suit. Think of the strong characters in your life and their relationships with others. Will there be a strong male character dominating the social atmosphere? Are you in a dominant male role or called to take on that role and responsibility? When combined with the Chariot, be careful with the cost of ambition. Temperance, on the other hand, fosters a balance and a conservative approach to these masculine issues.

When in a reversed position, Emperor Linestrider may show abuse, a dominant personality, or someone acting like a tyrant. Rigid thoughts and excessive dependence on practical knowledge can damage your processes and your relationships.

This card does not urge you to throw away logic or structure, but rather fight to bring the situation back to the positive side. This is not the time to rebel or drop your own power; it is time to use understanding, composure, logic, and discipline to create a fuller and better situation.

IV. Message of The Emperor Linestrider

Tarot cards numbered 3 and 4 represent parents in the most standard of roles. But just as the Empress Linestrider is the embodiment of the natural world, the Emperor is more general – society couples with nature. He is a symbol of social norms, both the good and the bad, and the repressive power in them.

The negative side of the Emperor is irrational laws in a society that favors stability over morality. Once law and order are paramount, a corrupt leader turns everything into a disaster. But if an entire system becomes corrupted, bad leaders will be born, and then the stability turns into a mortal enemy with morality. The emblematic value of the Emperor is tightly dependent on space and time. In a chaotic society, the Emperor’s strength is only a stubborn barrier to personal growth. Many people were thrown into prison for daring to stand up against unjust laws.

Even under the best conditions, the Emperor is still limited. He sought to impose an immediate network to suppress even the Empress’s spontaneity. If we lose the connection with our passions, life becomes indifferent and barren. The Emperor symbolizes the decisive challenge. During adulthood, many people will find the laws of society the most difficult to conquer. We must assimilate these laws, traditions, and beliefs, and then be able to overcome them in search of ways to manifest our individual identity. This does not mean that “rules are born to be broken”. Those who feel the most craving to break the rules are those who are most tightly bound by the law, as well as those who blindly follow the rules.

Because of the father’s role in teaching us how to accept social patterns, the people mired in the era of the Emperor are often the ones who don’t really accept the human community from the father. They know intellectually but those laws keep them suppressed and secretive. Similar problems also torment those who are stuck on Empress’s level.

More personally, the Emperor can be a sign of a time of stability and order in human lives and the hope to guide creative energy. This card can also refer to a special individual wielding great power in both matters and emotions. Usually, this character is a father but can also be a husband or a lover, especially those who see his or her lover as a model that replaces the father figure and allows him to take control of his or her life. Sometimes, due to the control of an Emperor, things become suppressed and not fully satisfied.

Corresponding Associations of The Emperor Linestrider

The Rebel Osho Zen Tarot is a powerful and influential person in this card who embraces his destiny. Moreover, on his shoulder is the symbol of the sun, the torch he holds in his right hand which symbolizes the light of truth he struggles to gain.

When The Emperor Deviant Moon Tarot shows up, he advises you to get in touch with your inner sovereignty and natural ownership. Realize that somewhere deep inside you is a royal memory.