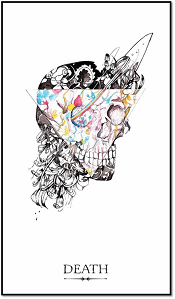 I. Keyword by the Death Linestrider

II. Meaning of the Death Linestrider

The Death Linestrider refers to a period of transformation and transmission. This card urges you to throw away the “dead burden”, clear up the things that are hindering your growth, and welcome a new spring.

The illustration for this card is quite deviated from the traditional images of Death but retains an important developmental factor and a balance between the old and the new, light and shadow. The card is associated closely with flowers, the idea of ​​pruning, or even clearing fields to improve growing conditions and harvest efficiency.

III. The Death Linestrider in a Tarot spread

When spreading the cards, Death Linestrider is an affirmation that you should welcome changes in your life as a positive and transformative resource. This card is often misunderstood and terrifying. But in fact, it is a comforting and positive omen, it advises you to let the change take place, to give up your harmful attachments, and welcome a more fulfilling life. While the change can be painful, it is for the better. In the past, Death shows that there has been a major transformation or change in the past that is affecting the opening of your future path. Maybe you got divorced a few years ago or graduated from college: this card deals with life’s big moments like that.

Death Linestrider in reverse reflects a refusal to change. Maybe you are holding onto the things that are keeping you from growing into a happier, healthier, and more successful person. Reconsider your attachments to old ideas, hatred, traumatic experiences, or your behavior. Consider your relationships. Be honest with what is holding you back. You have a chance to make a fresh start if you accept it. In some cases, the card may indicate an external resource is making negative and unnecessary changes, especially when combined with the Tower. Rely on other cards and your intuition when destructive resources are in control of the situation.

In terms of work, if you are still looking for the right job, then Death Linestrider refers to change, maybe because of economic pressure, you have to accept a job that you don’t desire. If you have a stable job but cannot see your advancement, now is the right time to start looking for change and breakthroughs. If you want to start a new project, you should plan for the problems that you cannot control.

In terms of finance, if you are in financial bankruptcy, then it can turn out quickly for good. If your financial resources are plentiful, then Death Linestrider implies that you need to prepare and accept deductions to deal with the upcoming financial changes. However, you should also seek advice from professionals as well as help from those with strong financial resources. Some unexpected conversions are force majeure, what matters is how you decide and deal with it. If you are looking to borrow or want to lend to someone, now is not the right time.

In terms of friends and associates, Death Linestrider implies that your relationships will have a rather profound transformation. On the one hand, you see completely aspects of other people’s personalities, from which you empathize and understand more so that the relationship goes through a new stage. On the other hand, you see the bad things they do to you, and you decide to end the relationship. As for your co-workers, you will encounter a big change that makes it difficult to get along with them, but you need a balance between your mind and your emotions in order to behave wisely.

In terms of family and relatives, Death Linestrider alludes to transformation. If you are someone who lacks love from your family, your emotional disadvantages are about to be compensated. If you are the one being cared for by your family, this protection makes you feel as claustrophobic as a bird in a cage, and you want to step outside and stand on your own feet. However, you should respond subtly, because if you do not state your dreams and prove them, your family members will not be able to understand and support you the way you wish.

IV. Message of The Death Linestrider

As we might have guessed, the great power of death takes us beyond ordinary democracy into philosophical and psychological implications. Death, like living, is eternal and ever-present. Individual forms always die while others appear. Without Death wiping out old things, nothing new would have existed in the world. Many science fiction novels have written about a tyrannical society if the world leader doesn’t die. The Spanish rebellion after Franco’s death underscores the importance of Death.

Because people are afraid of death, they keep on searching for the reason and value of death. Catholicism says that Death frees our souls from sinful blood and flesh so that we can join God in a better life. Carl Jung wrote about the value of faith in the afterlife. Without that faith, death would seem too tragic to accept.

Some believe that death associates us with nature. The ideology that separates us from this world will be “boycotted”; the decaying cells of the flesh feed other organisms. Each death brings a new life. The modern practice of mummifying and dressing the corpse to make it appear alive, then burying the body in an enclosed metal coffin comes from the hope of maintaining the separation of the body from nature, even while dying.

The truth is since we don’t know what is going to happen to our bodies when our souls make a proclamation, what we really fear is our personality being destroyed. It is an ego that sets itself apart from life; since it is just a mask that the ego does not want to die. The ego wants to stand on the universe.

If we accept death, we will live more fully. Resistance never wants to release energy; it tries to accumulate energy to counteract the fear of death. Consequently, new sources of energy cannot flow in. We can see this phenomenon realistically when a person is panting out of panic. They try to swallow air without exhaling, resulting in shortness of breath.

Because the stubborn ego holds the view of Death, it prevents us from enjoying life, and sometimes we have to take very long steps to overcome it. Enrollment rituals always lead to a false death and rebirth. Everything is done in order to make this death as “real” as possible so that the ego is deceived and experience deadly dissolution. Then, when it comes to “reincarnation”, we will experience a new maturity and a new source of free energy. In recent years, people have tried some similarities with these types of rituals through psychedelic narcotics. They believe that they are dying and they feel that the inner is reborn. Without preparation at The Hanged Man stage, however, that experience often causes profound upsets. The sum of two of the 13 numbers is 4 – the Emperor. Through Death, we go beyond the social ego. Since 13 is the superior version of 3, the card also reminds us of the Empress and reminds us that life and death in nature cannot be separated.

Contrary to popular belief, Death does not actually refer to transformation. Rather, it alludes to the specific moment when we should let go of the old masks and set the transformation in the ready position. Perhaps we will understand this better if we consider Tarot’s similarity to psychotherapy. With willpower (Strength) and the support of a psychotherapist (Hermit), a person allows the mind to perceive his/her own ego, and what personality or fear he/she wants to eliminate (Wheel of Fortune and Justice). This awareness brings calm and a desire for change (Hanged Man).

In Western culture, the number 13 refers to Judas – the 13th apostle in the Last Supper, and so this number indicates the death of Christ and of man in general. Friday the 13th was especially unlucky because God died on Friday. But we can also consider God as the 13th person. Death leads to resurrection.

More symbolically, the number 13 is unlucky because it goes beyond 12. Number 12 is perfect in a sense. It combines a pair of integers 1 and 2; It is the symbol of the 12 signs of the zodiac embracing the universe; It can be divided by 1, 2, 3, 4, and 6, which are more numbers than any other number. Number 13 destroys this absolute orbit. It is only divisible by 1 and itself. Once again, we can overcome the negative aspects of the iconographic system. Precisely because it destroys the perfection of 12, the number 13 means a new creation; death crushes old forms to make way for the new.

The interpretation of the Death Linestrider card is that it is time to change. Often it implies fear for changes. In the most positive direction, the card indicates that all old rigid attitudes should be suppressed for a new life to arise. In the most negative direction, it warns of a distorted fear of physical death. This fear is much deeper than anyone else might realize, and often a Tarot spread with the most positive instructions still ends badly if the Death is in the place of fear.

Death Linestrider in reverse signifies the conservation. Slowness and depression at times destroyed the ego’s will to fight change. The card always indicates that Death, with the immediate subsequent rebirth, is not only potential but essential. When it comes time to die, just die. Immerse yourself in delusion, the ego that prevents consciousness from coming to Consciousness. Laziness, boredom, and sadness hide internal fears.

The Death Shadowscapes Tarot mentions closing the door of the past and opening a new door, transcending the path of transformation, changing the state, removing old and redundant things, bowing to the unshakable power and widespread changes.

The Journey Wildwood Tarot is located on Samhain day, the holy November 1st after Halloween. The card is intimately linked to the crescent moon, belongs to the Water and Earth elements.