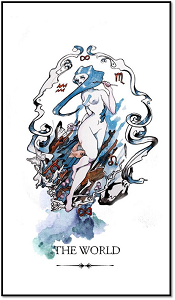 I. Keyword by The World Linestrider

The accomplishment, the end of a cycle, the achievement, the goal, the journey, the success.

II. Meaning of The World Linestrider

The World Linestrider is the last card in the Main Arcana. It represents fulfillment, accomplishment, and completeness. In general, this card shows an approaching cycle and signals a new phase in life. Leo, Taurus, Aquarius, and Scorpio are depicted on this card as the angels of the four basic elements, the four seasons, and the four corners of the universe. The dancer, surrounded by a wreath of triumph, is seeing the world with the experience and comprehension of the path she has traveled.

III. The World Linestrider in a Tarot spread

When in the current position, the World Linestrider shows that your work is about to come to fruition, although it will be hard to see things in a positive light right now. Or perhaps you have seen a cycle complete and are feeling a new burden from new responsibilities. Perhaps advancement is finally coming through hard work, or a baby or a new home representing hopes and dreams – but still, you have to work hard for those to happen!

If you see the World Linestrider in the past position, you are reminded that the ground you are standing on today has been built up by your past actions. The future is built through each day and through every decision. On the more mundane side, this card can be about a real journey, traveling the world, especially when appearing with the Fool or the Two of Wands.

It is not that bad when the World Linestrider is in the past position, but it may mean it is time to bring your vision to new victories. Has it been a long time since the last time you got a big victory? Are you stalling? Perhaps now is your chance to start new modes of action. In a futuristic position, this card reminds you to “stay tuned”, and all your hard work and investment will pay off even if you have not seen any sign of them yet.

The World Linestrider in reverse indicates stagnation, movement and maturity slow down to the point of being ready to stop. Or so it seems. In fact, the World’s freedom and excitement always have the potential to be released when one feels ready to begin dancing life again.

When combined with the Two of Swords or the Hanged Man, the World can mean something is stopping you from moving forward. You need to make an important decision or accept the facts that will help you move towards the completion of your cycle. Think of your situation most sincerely, what is holding you back? When combined with the Magician, the World is a powerful sign that not only helps you accomplish your goals, but also shows that others will see what you have done and want to take part in.

On the negative side, the World Linestrider warns of renunciation, laziness, and lack of industriousness. This card can also tell that you are reluctant to change or try to deny the inevitable end of something that has caused a delay. If the spread is about another person, the card may indicate that the person is not working as hard as they seem to be or as they stated, or that something is preventing the person from succeeding and winning.

In terms of work, if you are unemployed, then in the coming time, even if you do not pay attention, things will have new changes and you will achieve your desire. Look at things in a positive way, don’t be stubborn or resist the change. If you are having trouble with your job, now is the time to consider changing. If you are going to start a new project, this is the stage for you to prepare everything before entering a new start.

In terms of finance, if you are in a tough time, the World Linestrider signals it will be over very quickly. In the opposite case, this is the time to regulate your money as well as save because there will be adverse changes in the near future. You need to be patient in dealing with these obstacles. If you want to borrow someone else, frankly make it clear to them. However, when you want to lend to someone, the collection will be delayed quite a long time.

About friends and associates, the card talks about having yourself sometimes isolated from outside relationships, what you need to do is confide in your best friends. Learn to accept differences and trust others. Friendship is like wine, the older the year, the stronger the flavor. In the workplace, try to get your job done on your own and don’t rely entirely on your colleague’s help. At this time, you should also be withdrawn and avoid getting involved in workplace’s gossip.

Regarding family and relatives, the World Linestrider is a card of quite pronounced polarization. In the first case, you get too much attention from your family making you feel stifled, but in the opposite case, the lack of care from your family makes you feel unwanted. But in any case, the love of your family for you is also immeasurable. Learn to listen and feel with your heart to understand your loved ones. Because every human being is a world, only when you enter separate worlds can you sympathize and concede them, especially your loved ones.

IV. Message of The World Linestrider

How can we describe an understanding, boundless freedom, and happiness that transcends verbal boundaries? Realizing the Unconscious in a conscious way, the outer self united with the life force, knowledge is not knowledge but a continuous dance – they are both real, and neither true.

We have known about the World through the previous cards. The figure as well as the pair of magic wands combining the Magician and the High Priestess. We see the World sparkle in the Chariot and meditations on how Chariot’s symbols come to life. One way or another, the Wheel of Fortune comes with almost every card on the bottom line. This line is intended to associate ourselves with everything found in the Major 10th card (from the outside), that is destiny, the movement of life, the elements of existence. When unity is reached, the symbols disappear, merging with the dancing soul.

We see The World in the Hanged Man, in numbers and pictures. The 12th card maintains happiness through a complete retreat. But even the World Tree is just an illusion created by the mind’s need to cling to something. As we blend the separate ego into the water below the Hanged Man’s shining face, we will learn that true unity lies in movement.

Everything in the universe moves. The World moves around the sun, the sun moves in the galaxy, galaxies clustering and all moving around each other. There is no center. There is no starting point or endpoint. Yet the center exists everywhere, because in a dance, the dancer does not move around any unique point in space, but the dance of its own unity is centered around the very constant movement, but also the non-stop peace. “Existence” and “Nothingness” coexist.

And so we come back to the Fool. Innocent and fresh, but in harmony with wisdom. The laurel wreath refers to the number 0, which includes the symbolic meanings of the number 0. It also refers to the cosmic egg, the original model of fertility; everything that exists has potential, and all potentials have been realized. Nature appears everywhere, in everything.

The dancer does not lose the being that exists in the form of mundane flesh – the existential roots of the dancer lie in the physical and sexual reality. Instead, the energy flows, changes, and innovates constantly. When we know that the divine is not something out there, but within ourselves, our appearance conveys this truth to those around us.

A similar image to The World is Shiva, the Lord of the Cosmic Dance. He also danced with outstretched arms, one leg straight and the other bent, a balanced head, and a calm demonstration. The right leg of both images is “rooted” in the material world, while the curled-up leg is a symbol of the liberation of the soul. When we reach the climax of our harmony with life, that moment will realize our freedom. The face neither carries joy or sorrow but is calm in emptiness. Arms outstretched to welcome all experiences.

Shiva-dancing is often portrayed as “bisexual” – half of the body is Shiva, the other half is Parvati – the female part of Shiva. In many other versions, the dance in the World is also bisexual with dual genitals as if to say that unity is beyond human understanding. In the discussion of the Lovers, we have mentioned the popular belief that humans are of an androgynous origin. The dancer reveals and unifies all different aspects of life.

That same sense leads us to the “memory” of the first primitive dualism that took humanity one step further towards the notion of “the whole world was once a man”. This belief can be found in the Gnostic and Brahmanical sects of Germany, India, and in other myths, especially in the Qabalah sermons.

There is an image called “Adam Kadmon” that is believed to be the original creature of Agnosticism. Instead of having flesh, Adam Kadmon – also an androgynous creature – is described as pure light. Only when the light essence crumbles and splits into separate parts of the universe does the problem of light appear to be “confined”. The interesting fact is that it is contemporary scientific theories about the origin of the universe that describe the original universe as just a “particle”.

The moment the “particle” splits, it is pure light; it is only later, when the debris becomes isolated, does a few streams of energy converge on the matter – or, according to Einstein’s famous formula: E = mc2.

Descriptions, metaphors, and even reflections can all refer to the miracles hidden in this 21st card. When the World Linestrider appears in a spread, these miracles are “downgraded” to daily problems related more to the spread. This card means success, achievement, satisfaction. At a higher or lower level, it refers to the fusion between one’s internal senses and external activities.

The World has many meanings. But the real meaning is agnostic (unknowable). They are the goal, the hope, the intuition. The way to that goal, the dance’s move and music lies in every living image of the card.

The World Rider Waite Tarot Card can signal that you are really feeling the weight of this world over your shoulders, which means it is not a pleasant state. This is the best time to see how well you get help when you need it. Remember that you do not have to do everything yourself.

The World Tree Wildwood Tarot is located at the center of the cycle and belongs to the element of Fire. It summarizes all the different aspects of The Wheel and human being in the Major Arcana.

The World Shadowscapes Tarot refers to contentment, tranquility, and fulfillment in mind, ultimate success, and signs of the end, balance, mixing together to bring the tone of countless melodies in life.