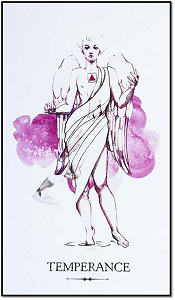 I. Keyword by Temperance Linestrider

Temperance Linestrider depicts a Hermaphrodite angel, a child of Hermes and Aphrodite, showing a balance between the sexes. The angel puts one foot on barren ground representing the physical world, and one foot on the water representing the subconscious; This also shows the need to “examine” before embarking on implementation.

Temperance shows you are learning to bring balance, patience, and moderation to your life – or perhaps you need to do it. The square on the chest symbolizes the earth, a sign of willpower, and the triangle inside the square is protecting the feminine aspect with the law of nature.

Temperance Linestrider usually depicts an angel holding two cups signifying the subconscious and the superconscious. One cup contains hot water and one contains cold water. The image of the open palm is to denote the dynamics of the current flowing between the lower hand and the upper hand, to describe the rise from the lower to the higher. Temperance personally mingles two opposites and finds a balance in life to avoid extremes.

When spreading the cards, if Temperance Linestrider appears in the main position, it can show you are in between two conflicting choices, people, or regions. It is easy to imagine a spread with a King in the past and a Knight at a potential position, showing two male opponents that you are (somehow) stuck in between. When combined with the Tower, it shows that factors beyond your control are affecting your balance and stability. If the Devil does appear in the spread with Temperance, be especially wary of your addictive habits or of those close to you.

Temperance Linestrider in the reverse suggests that something in your life is out of balance. This can represent conflict or over-limits, which are creating stress and tension in your life. Ask yourself what is out of balance and be honest about the effects it has on the path of you and your beloved ones. For instance, are you spending too much money or are you engaged in activities that keep you away from your family for too long? Are there habits in your life (or those around you) that cause someone to incur an imbalanced workload, financial burden, or responsibility? Like nature, the Tarot always pushes us towards balance, so take a moment to find your own balance.

Temperance Linestrider is often depicted with an angel with closed eyes, wings behind the back, and two cups in hands. The wings represent knowledge, the two cups represent unconsciousness and consciousness, the water flowing from low to high represents the ability to control miraculously. The ground represents the real world and the water represents the mysterious subconscious. The path behind the angel implies a return to the real world after committing to understanding the realm of the mysterious subconscious to reveal oneself.

In terms of work, the card indicates that you are facing a great challenge, and what you need to do now is to be calm to consider and control everything to deal with force majeure problems. At work, you set too high goals but you are not ready or the conditions do not allow it, you should set goals that are within your reach instead of chasing illusory things. In the case that you want to start a business or want to apply for a job, things will get tough in the early stages, but the card advises you to persevere and try hard because your efforts will pay off.

In terms of finance, Temperance Linestrider reminds you to balance your economics and think twice before deciding to spend or invest in a new area. If you are considering whether to propose a raise or not, then this is a good time, your hard work will be appreciated. In addition, you should boldly propose a salary that is commensurate with your worth, but this is not a good time to borrow or lend to others. Because you can run short of your financial resources and make it difficult to collect money lent to others.

In terms of your friends and associates, you should be careful about any falsehoods that can hurt you. You want to avoid it by pretending you don’t know and don’t care. However, the card reminds you that evasion is only a temporary improvisation and you need to deal with the problem sooner or later. Regarding your coworkers, you should not believe all that you hear so easily, you need to listen selectively and think about the purpose of others. If you are in a hurry, it can lead to big trouble.

In terms of family and relatives, if you are still dependent on your family, their care can sometimes make you feel tired and uncomfortable. However, you should avoid confronting your family members about your future path. When you are mature enough, you can still walk barefoot in the middle of a tough life without someone supporting you. If you are a busy person, Temperance Linestrider is a reminder to organize and balance your time to have precious family moments.

The Temperance, which appears directly below the Chariot, depicts a person reconnecting with the real world but in a much more meaningful way than before. Because if a child is directly connected to life, he does so unconsciously, and as awareness increases, the ego grows. Temperance points to the ability to combine spontaneity with knowledge. Tarot’s Temperance does not describe this in a radical way, as thorough clarification is not necessary. It is not artificial restraint that obeys morality, but quite the opposite; is a true response to any situation that comes up.

The word “Temperance” is derived from the Latin phrase “Temperare”, meaning “blending” or “harmony”. Those who have freed their inner ego not only have calm personalities but also have the ability to reconcile opposing aspects in life. Many people can only cope with life by breaking it down into individual parts. They create a personality for work and another personality in private, and both fail. All these divisions arise from the inability to accept events as they come, minute by minute. Temperance combines the elements of life. In reality, it combines different aspects of personality, so that person and life can “share joys and sorrows” naturally.

The “combination” sign is clearly shown in the card image. The first thing we see on the left side of the card is the flow of water pouring from one cup to another; the elements of life are blending together. Note that the lower cup is not directly below the higher one – that is, it is physically impossible to tilt water. For some people, the ability of a person with Temperance to handle all matters in life with enthusiasm is a miracle.

The Rider’s Temperance paints both cups as if magically. In Wirth’s Tarot deck, the higher cup is silver, showing the flow from the Moon – which is the flow of Unconsciousness, to the Sun – Consciousness. The 2nd line of cards of the Major Arcana begins with a retreat from the world in search of the inner self; Now it is time to get back to the normal routine of life.

The path is a special symbol that implies return. We have climbed into the ego-hole and now have to crawl again to re-enter the outside life with a more complete personality. The abstract viewpoints are coming to fruition; Temperance is a card of attitude, not of concepts. Temperance’s personality acts on an inner sense of life, connecting the two personality realms. “Water” is also a symbol of potential, that is, the possibilities of life; while “Earth” represents tangible things that are real. A temperate person, through “action”, realizes the confusing feelings of Hanged Man.

The angel is modeled after the beauty of the goddess Iris in Greek mythology – the Rainbow goddess. Rainbow is a sign of tranquility after the storm, reminding us that Temperance is a personality that has emerged from a terrifying experience of death. The rainbow created of water but shining across the sky – a symbol of the inner self – which was seen as darkness, chaos, fear, is now diagonally drawn and transformed into the promise of new life. In Jewish and Catholic traditions, the Rainbow is a sign of the post-Deluge rebirth. Deluge, like Shiva’s cosmic carnage, represents the death of the old (psychologically) loops of habits that are not the truth and the joy of life, which easily leads people to enter the “sinful” path – behaviors that destroy ourselves and those around us.

On the religious side, the angel is a symbol of the eternal soul liberated from death. In some other decks, if we look closely at the angel’s collar, we will see God’s name behind the robes. In Catholicism, the soul will unite with God after the resurrection. The triangle in the square denotes the rise of the Soul from the physical body.

Psychologically, angels are the energy source of life “sublimated” after the death of the ego. The triangle is now the stirring energy in the square containing everyday activities. We don’t have to resort to miracles to feel our connection with the eternal universe. We just need to be ourselves.

The meaning of interpretation, like the concept of the card, begins with moderation, balances everything, and adheres to the Doctrine of the Mean. The card refers to the right, appropriate action before any unexpected circumstances. A person lacking Temperance is someone who needs to do something all the time even in situations where just a wait is required. It sometimes appears to discourage carelessness and agitation.

Temperance Linestrider means combining different elements together – the harmony of activities and emotions to create a sense of symmetry and peace. Since it is meant to balance and combine the opposite aspects of life, Temperance also plays a special role in the Minor Arcana. If in a Tarot spread one wonders between, for example, the Wand and Cup – the initiative and passivity, or Cup and Pentacle – illusion and reality, Temperance neutralizes and acts out of the inner feeling of life and can suggest ways to combine these contradictions together.

Like The Fool in reverse, the reversed Temperance Linestrider refers to extreme extravagance. This is because one lacks the Inner Consciousness to know what is appropriate for any situation. This card also warns that you may have let life fall into a state of fatigue and you are slipping from one misfortune to another prosperity. In fact, it can even point to a failure in a big project by letting conservatives and fears of the past return. On a simple level, Temperance in reverse advises us to calm down and avoid agitation; in the deepest sense, it takes us back to Strength to relearn the feelings of pain and panic in the process of overcoming death and to a blissful and joyful rebirth.

The Balance Wildwood Tarot presents ancient symbols such as serpent-entwined staff or the twisting and turning of the human genome – the source of life.

The Temperance Shadowscapes Tarot refers to harmony and balance, the balance between oppositions, healing, the reconciliation between opposing divisions, self-restraint, exploiting the principle of absolute balance.