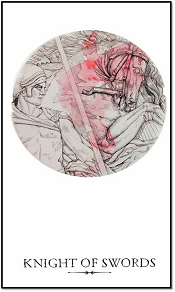 I. Keyword by Knight of Swords Linestrider

Knight of Swords Linestrider Tarot is the most intelligent and demanding knight. He is bold and energetic, and he is guided by his mind rather than his heart. This card often appears at the beginning of a relationship or a new project. He is full of energy and motivation to move forward, but he is not patient, compassionate, or kind. The Knight of Swords is loyal and moral but is often quite harsh or controlling. Having him as a teammate would be great but he can cause some problems with personal interactions due to his lack of delicacy and low emotional quotient.

III. Knight of Swords Linestrider in a Tarot spread

You can see this card in your spread if you are moving forward but are not very concerned about other people’s feelings. Is someone in your life behaving like that? Remember that the mind needs to be balanced with the heart. The Court cards – specifically the Knights – usually represent someone in the querent’s life. Is there someone in your world who is rather insolent, loud, maybe a little aggressive? If the card is in the future position, you will soon see this type of person appear. Don’t be surprised if your annoying cousin drops by unexpectedly or if you suddenly have a new co-worker and he fits all of the above descriptions perfectly. Sometimes Knight of Swords Linestrider Tarot shows you directing this knight’s energy in situations where your voice is not heard. If coupling with the Hierophant, you may need to emphasize your presence and speak up within an organization of which you are a part. When combined with the cards of the Pentacles suit, beware of hasty financial decisions that are prone to failure.

On the negative side, this Knight can show that the querent or someone close to them is being quite impulsive or domineering in the sense of losing control. Energy and confidence are great, but they need to be balanced with care, planning, and concern for the people involved. This card can be a warning that if you do not slow down, you will have serious consequences.

The reversed Knight of Swords Linestrider Tarot can mean that you need to be wary, especially with newcomers. Someone may come to you insincerely, even though they are not necessarily a literal bad guy, but they have the energy, information, or ideas of the similar concept. If this card appears when you are about to take a trip somewhere, be prepared that the trip may last longer than you want or expect. Be careful about sharing information in any way. Remember email is generally not secure and nearly any phone conversation can be overheard or recorded. There’s no need to be overly concerned, but be careful.

With the two elements of air and fire combined, the personality of the person mentioned by the Knight of Swords Linestrider Tarot is a rational one. They reason and handle problems in life logically and wisely. Besides, they are intuitive people. So they are rarely deceived. On the other hand, they love the order they set for themselves, and often tend to force others to follow that order. On the contrary, they like new and constant changes in life. They are the type of people who are passionate about adventure, sometimes bold and aggressive in a negative way.

It will be the most painful torture if they are to be left alone within the four walls. When their body is not trained, the environment changes, their minds begin to draw countless dramatic scenarios. However, if they are within these four walls but have loved ones by their side, they will feel very comfortable and willing to tell everyone a lot of interesting stories.

Take a look at the image of the Knight in the card, you will clearly see that they are direct people, always talking straight to the point without beating around the bush. But this is also a shortcoming of their own, without proper adjustment, they easily make others hurt by their heartless words. They are people who have many extensive relationships, as well as have the ability to hide their emotions well., Usually, only those close to them can see them in times of anger. Outsiders can only see their enthusiasm and coldness, even in situations where they are provoked by others.

At work, they always tend to be pioneers and leaders. In difficult situations, they always have amazing explosive power. However, they are the ones who lack perseverance in difficult situations that last year after year. In a negotiation, they are often the first to give up. On the other hand, they are well-organized people, however, they are extremely strict and demanding. When they are not fully mature, they tend to not want to face the truth or are often irresponsible in the mistakes they make.

In relationships, they often have a desire to control others to do as they please. This leads to frequent conflicts. On the other hand, they tend to be stubborn, always think they are right, and have difficulty empathizing with other people’s feelings. Often heartless and lacking sophistication, so they easily hurt others with unsophisticated statements. Being traditional and quite conservative, however, they are the ones who have the ability to get up from broken relationships to move forward. What they need to avoid is being too pragmatic and calculating, both in life and in love. This gives them a sense of security but will push them away from the people they love.

In terms of work, the card shows that you are about to go through a tough time. As well as business cooperation, there will be rejections from colleagues as well as partners. If you want to invest, start a new business, or expand your business, you need to think carefully as well as perform risk measurements. On the other hand, you need to decisively quit the jobs that do not bring practical benefits but only make you bogged down as well as consume your time and money. Besides, the card shows that you will encounter fierce competition in the working environment.

In terms of finance, your difficulties can be solved through negotiation. Negotiating to attract capital needs to be fair, transparent, and clear in terms of benefits. In case your financial resources are stable, you need a reasonable spending and investment plan. Avoid spending purposelessly and wasting money because the card signals about unexpected things that may happen in the future. If you lack preparation, then you will have a hard time. The card, on the other hand, gives advice in times of limited financial resources, you should look to someone with a personality like the Knight Of Swords to ask for wise guidance to help you deal with your problems.

In terms of friends and associates, the Knight of Swords Linestrider Tarot has warning signs of debates aimed at winning or losing in your relationships. Which is the main cause of emotional restraint as well as the accumulation of conflicts for a long time. Regarding colleagues, the card advises you to be careful with your personal information. Beware of unfair competition by tricks of your colleagues. During this time, you need to stay calm and avoid arguing with colleagues when joint work is stuck or delayed. The problem is not who is right and who is wrong, but how to solve the problem.

You may be falling in love with someone, whether you are male or female. If you are currently in an engaged relationship, then it is likely to become brighter, deeper, and more satisfying. If you are looking for love, it may come faster than you expect, but you must stay in touch with the person who is ready to open his/her heart to welcome you into the rose garden of love. Freshen yourself up and go on a date with that person. You will find a lot of fun.

In terms of family and relatives, the Knight of Swords Linestrider Tarot signals conflict and emotional rifts between siblings and relatives due to property disputes and ideological disagreements in life. In addition, the imposition of the elder generation on life on the younger will make the situation even worse. This will also make it difficult for the younger generation in the family to control their own lives, lack the ability to balance their lives, and the ability to integrate into society. In some ways, the card also signals bad news from distant relatives.

In terms of spirituality, this Knight implies a need for a quiet space and suitable place to deepen one’s spiritual knowledge. It is very difficult to increase psychic abilities if you keep walking around aimlessly. Remember one of the world’s greatest affirmations: “Don’t be afraid. Just have faith” (Mark 5:36).

On the positive side, the Knight of Swords Linestrider Tarot is a master of logic and reason. He has a sharp mind that makes it easy to get to the heart of any problem. He speaks clearly and frankly and is always powerful. His judgment is firm and unaffected by emotions. Others relied on his insightful analysis of the problem and its solution. On the negative side, he does not specialize in diplomacy. He may behave unscrupulously and indecently. When he thinks you’re wrong, you’ll know it. He fantasizes about his good qualities and has no tolerance for stupidity. He expects others to follow his point of view. To him, all feelings are inadequate and illogical.

In a Tarot spread, Knight of Swords Linestrider Tarot shows that his sharp demeanor is relevant in the situation as an aspect of you, of someone else, or of a general atmosphere. You need to ask yourself, “Will this knight’s energy help you, or will it hurt you?”

If his style is clear, then the balance is essential. Do you always impose your position on others? Do you get in trouble for saying what you think? Is your lover too indifferent or becoming alienated from you? Do your colleagues tend to criticize instead of supporting you? This may be the time for a change.

Unlike some cards of the Swords suit, the Knight of Swords actually brings rather optimistic and joyful energy. The Knight cards usually mean that someone or something worth looking forward to is coming to you. The Knight of Swords Linestrider Tarot also indicates that mental, emotional, and physical energies are at their peak.

If you’re waiting for news from someone or something, then it’s likely you’ll get what you want to hear. Knight of Swords can come with a lot of activities, like traveling, meeting friends, accomplishing something. You don’t tend to feel like you have to wait for anything to happen to you, that’s fine. Follow the call of your heart.

If the energy of the Knight of Swords Linestrider Tarot is lacking, you may need clarity. Are you too emotional? Let your mind control your heart next time. Do you overestimate other people’s opinions? Believe in your abilities. Are you afraid of opposition or dare to speak your mind? Let the Knight of Swords bring you into his world of reason and confidence.