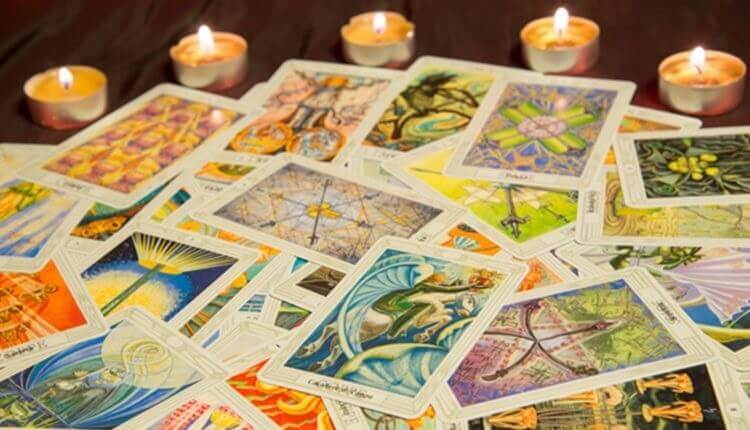 I. Overview of Thoth Tarot Deck

Thoth Tarot deck is one of the most famous Tarot decks in the world, which painted by artist Frieda Harris under the guidance of the legendary researcher who is a member of the Golden Dawn, Aleister Crowley. This deck is influenced by the Book of Thoth and Judaism. Although still being one of the classic decks, it contains the Kabbalah mystical symbol systems and astrology from the Book of Thoth, which requires users to do a lot of research to understand the hidden meaning in each card and have a certain knowledge base to capture the deck in the best way.

Thoth Tarot deck is accompanied by a guide book to help users are equipped with knowledge of reading cards and the connection between image system of cards and many fields such as astrology, arts, music, myths, Tree of Life, Runes, elements, and other prototypes.

The Thoth Tarot is considered one of the classic decks but it requires a lot of knowledge to be able to be contemplated. However, this is a controversial tarot deck, due largely to Crowley himself. The deck of cards was started in 1938 and completed in 1943. Traditional Tarot symbols were modified according to advanced mystical lines, based on Crowley’s mystical theories (Crowley is also a member of the Golden Dawn, as well as Lady Frieda Harris).

This deck has the characteristics of mystical nature so it can be difficult to read. Crowley has written a guidebook for the deck, “The Book of Thoth”, to interpret Frieda Harris’s images. Even though it is quite obvious, still not an easy-to-understand book. There are other books which may be a bit more understandable like Lon Milo DuQuette’s “Understanding Aleister Crowley’s Thoth Tarot” or “Tarot: Mirror of the Soul” by Gerd Ziegler.

The accompanying guidebook begins with the foundation of the deck and also covers a cornerstone of Tarot, helping it to connect strongly with Kabbalah and Tree of Life. The author also makes suggestions for the reader’s request to reach higher powers before spreading (or, instead, by looking at a strong light source to purify and raise awareness).

In Thoth Tarot, there is a spreading method with 15-cards (placed in 5 trios) as an alternative to the classic 10-card Celtic Cross spread.

The Fool: In the spiritual aspect, it represents ideas and thoughts of trying to overcome the material world. From a material perspective, it expresses crazy and eccentric thoughts, even weird passion. The card represents a sudden and unexpected impulse.

Knight of Cups: The fire part of the water, the man with commitments, kind but passive, engaged with excitement, sensitive but shallow. Being affected: sensuality and leisure, dishonesty, tend to be depressed and addicted.

The deck itself is a work of art expressing both Deco art and projective geometry (through Rudolf Steiner’s work). Instead of using straight lines or regular curves, Thoth Tarot uses arcs, swirls and geometric forms that overlap along with the color scheme to create impressive images. The deck makes you feel like you are entering another dimension to get to know it, rather than reading it.

The card’s images are mostly from the traditional image of the world of Aeon, the home of the Gods carved on the tomb Steve of Revealing (of the ancient Egyptians) and “The Book of the Law”.The card size is 2 7/8 x 4 3/8 inch (7.5cm x 11cm) with good quality. The back of the card is a Rose Cross, surrounded by a white border. This is the implication of Lady Frieda Harris of the mystical symbol of Cross roses. This cross represents all 78 Tarot cards.

The card’s main face in Thoth Tarot has a small white border on the outside, followed by a gray border inside. For the Major Arcana, Roman numerals are centered on the top of the card while card’s names, zodiac symbols and Hebrew characters are placed at the bottom (the name of the card is printed in black, the character is printed in light gray on the side, similar to the suit name of Minor Arcana; they are relatively difficult to see). For the numbered cards (Pips), Arabic numerals are placed on the top of the card and the mystical name placed at the bottom. For the Court cards, the name and suit are located below the card.

In Thoth Tarot, the Fool is an interesting card – there is an impermanent entity within it – a strong person with arms raised high in which the left hand holding a delusional sphere and the right hand holding a scepter. We can also see a dragon/crocodile and a lion/tiger under the feet of the character.

The Two of Cups (the mystical name is Love), illustrated by two beautiful water lines (silver lines on the left and yellow lines on the right).

Note: The numbered cards (Pips) are not described in such a way – they are almost in the traditional Marseille style by using some additional symbols.

The Three of Wands (Virtue) shows three golden sticks in the middle of the card, which is in contrast to the bright orange background.

The Ace of Disks is a geometric wonder! There are five concentric circles combining inside the card with a yellow circle in the middle. The center of the circle is a six-pointed star and a pentagram.

For those who are new to Tarot and interested in the Golden Dawn or mystical symbols, Thoth Tarot is a great deck of cards. For those who simply want to collect Tarot cards, use it to prepare a journey or guide the future, this will also a very suitable deck. You should also consult DuQuette’s book (instead of Crowley’s Book of Thoth) to find more understandable explanations.

7 Things You Need to Know When Using Oracle Cards