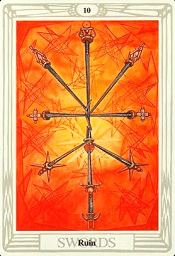 Perdition – The spirit of denial of life

I. Analyze and describe 10 of Swords Thoth Tarot

On the card, we recognize the shape of the Tree of Life arranged by ten swords. This means that the hilts are pointing out and forming nine vertices (Sephiroth) and the tips of the sword are put in the center. The tenth sword is in the center of the symbolic image, with a heart on the hilt and is broken by the other swords. It represents the focal point and in this position, it is the bridge between the upper realm and the lower realm (the spiritual world and the physical world), this card symbolizes destruction or as Crowley says, “This card shows the disruption and disturbance of the overall and stable energy source”.

This card represents the end and, like Death Thoth card (XIII) and Tower Thoth card (XVI) representing the abandonment of great things, or like the Aeon Thoth card (XX) denoting apocalypse and innovation, leading to a new beginning or revival of old values, related to this, Crowley said: “Awakening and enlightenment finally come but because there is nothing to lose, we can recklessly start from scratch”. This card, therefore, will represent the need to fix the problem of the process that the Ace card begins and brings about patterns for intellectual development, which over time are accumulated in our experience because they need to be recorded and removed regard of many levels shown on ten cards.

We see in this card the intellectual power that has created a final strong blow to the development process. It is the spirit of rejection of life (Schopenhauer). Contrary to the natural end of a development cycle shown in the Death Thoth card, there is always a random end. This card alone cannot tell us whether this step is right or wrong, will it lead to the end of pain or will lead to an end that we long for and will liberate us. This open-ended card is capable of whether we will experience its theme proactively or passively. In the first case, we are challenged to retest the intention to end a thing with violence; however, results can also validate our plans thoroughly.

The card of random ending means that we give up or at least abruptly end a project, a plan or an experienced period. The painful feeling of having to give up (in a superficial way) binds frequently and naturally with this card. However, it also carries the meaning of the necessary smart steps. In the process of identifying irreparableness as well as the fact that every arbitrary ending leads to a natural one, we should not consider it a hasty end. Instead, it will really be an emergency end only after being carefully considered. These considerations are fundamentally redundant when this card does not give us a choice but implicitly implies that grief will invade us.

This card mainly denotes the so-called “parting”. This is either the painful end of a worthy relationship or the end of a bunch of negative emotions. In the second section, this experience is like a painful surgery, but it will eventually make us healthier, and the wound will soon recover over time.

The hilts of the swords carry various symbols described below:

Kether = Scales and Libra which is exalted in Saturn.

Chockmah and Binah = carry the hourglass which is a symbol of time and Saturn.

The Tau (or Tav) means “cross,” and is the final letter of the Hebrew alphabet. It is numbered 300 in the Greek and 400 in the Hebrew numerical alphabet. The Tau corresponds astrologically with Saturn and the concept of finality.

Tiphareth = Heart = your joy of life and love for yourself and others are destroyed.

Hod & Netzach = these swords have 4 pronged guards on them and have a Saturn like restriction associated with them.

Looking at the card closely, the upper 5 swords damage the 6th sword and the lower 5th holds it in place.

Rays in center = yellow and white represent Malkuth and mean that the energy that this card expresses materially or tangibly in our lives.

Background = fiery orange with red swastikas, the color of Mars.

In astrology, a malefic planet is thought to bring bad luck and misfortune. Mars is considered the lesser malefic, while Saturn is the greater malefic

This card bears both of these difficult energies.

V. 10 of Swords Thoth card in the upright and reverse

Wisdom through pain and loss.

The destructive power of negative thinking which disrupts the harmony and balance of the heart.

Can mean the loss of possessions and financial ruin.

We need to look at where the fear of life lies and change the way we deal with them.