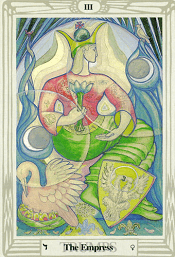 I. The Background of The Empress Thoth Tarot

When you look at the Empress Thoth Tarot, it is a picture of a woman in a crown sitting on the throne, the center points are implied by the zigzag green flames. The observer noticed the body with a twisted posture: chest and arms were facing forward, while her face and lower body tilted to the left side, compared to her strong upper body (mother’s strength), part round buttocks (sensuality) and lotus flowers are blooming (prosperous) in her right hand.

Her right hand held Isis’s lotus flower which is symbolized femininity or passive energy. Its roots lie in the soil beneath the water or right in the water, as the petals bloom under the sun. Parked on the fire shaped pillars of the throne are her two most sacred birds – sparrows and doves. It is a carpet embroidered with fish and mixed flowers below the throne. Her coat has two faces: on the one hand, the pelican figure is feeding her children with the blood of her heart; the other side is a white eagle of the Alchemist.

The two-headed eagle is the alchemy symbol of transformation and rebirth, which describes creative cycles. It emphasizes the inner mind of the Empress, all of the lives have its origin from the mother’s source “and creates its appearance (birth) when all of its prerequisites are fulfilled.

The pelicans are feeding their children with their own blood, is the symbol of the mother’s devotion and endless love, even if this symbol is explained easily: to find food for their children, the pelican bent down deeply till its beak touched its chest. Because fish blood is usually still on the beak, its fur is tinged with red, giving the impression that it is taking its blood to the children.

In this card, the appearing of Empress seems to be through the perspective of men, described in terms of the masculine experience along with the eternal feminine rather than the symbol of endless power through which nature constantly creates new life. The light pale color of this card contains elements of “pure whiteness”, and is also the idealized masculine image of the mother. However, the Empress Thoth Tarot is actually the symbol of the Great Goddess, the mother of the elemental authority of all life. She is a symbol of creative formation, through which thought has not yet become a material mother.

A glance at a dove perched on top of the pillar expresses the intellectual inheritance of The Priestess or the harmony of femininity with gods (the ideal image mother of Christianity is a virgin), because the Holy Spirit  conceives for Mary in the form of a dove (see p. 45 on the dove symbol).

The Empress Thoth Tarot was holding a lotus leafstalk that looked like a penis symbol, representing the masculine reproductive energy in her right hand, her left hand gently opened as cuddling an invisible child.

The outfit  (the White bee)

Bees are dancing in a circle (a symbol of the queen in the beehive) on a pink shirt. The character is surrounded by blue water pillars, created from the flash of The Magus in the ocean of High Priestess.

The expression of those images (entire picture)

The character in the Empress Thoth Tarot has not flowered and entered life. Her face was neither imprinted with passion nor radiant because of her instincts. All hints about pleasure are expressed with pure solemnity: she appears more like a saint than a woman. This card traditionally represents devotion and passion. It is a higher intention to “expose” the ancient femininity of lower instincts on the altar of infinite love, or the answer finds in the image of a couple of women and Crowley’s mother, allows him to ignore your lower instincts (sexuality). Naturally, the Empress is also the symbol of the dark mother demanding a life that he is afraid of.

2. Surrounding (the others symbol)

The love of Mother is represented by a red-pink pelican feeding her blood (see “context”), in the Egyptian calendar, which represents the harvest season. However, the two-headed eagle is a symbol of collaboration (in alchemy, it is a symbol of male mercury), entered into a gradually rising moon sign.

The neck reveals the portrait of the Empress to the world, representing the eternal birth. This is also reflected in her crown where the world was born between the crescent and full moon.

The crescent moon on the right and the full moon on the left symbolize the eternal cycle of growth and decay. According to that meaning, the trumpets at the bottom of the card reflect the two feminine poles (from a man’s perspective); Lilies are a beautiful image and widely known as the purity, innocence, and virginity. However, if it is a Japanese orchid, it adorns the grasslands of the hellish world of Greece, the valley of Japanese orchids. It is for Persephone, the dark side of Great Mother. Another legend says that Aphrodite really hates lilies because of its harmlessness and purity. Hence, she coldly gave it a picture that reminded the donkey’s penis.

1. The context (the realm of lives)

The Empress represents sexuality in its charming image chain; she was Eve after being exiled, in contrast to her sacred equivalent of High Priestess. We find ourselves in the material realm, Mother Nature or the source of food, or warmth (full moon). This is a time of gentle combination, gentle attention, and great transformation. However, it was also a time of possessive affection (the baby grew up in her mother’s womb), and in the light as well as in the harmonious world that this painting conveyed to us, the shadows had advanced from below.

2. Overview of the Empress Thoth Tarot

We recognize a Great Goddess in the Empress Thoth Tarot, representing the source of lives. She is the endless power of nature that constantly brings a new life, and is an inexhaustible spring that encourages our creative potential and ability to accept impulses, allowing a new thing to inside development. She also symbolizes the need in order to destroy the structures of the old life, create a new one, break the taboos, and raise herself to learn the mysteries of life as well. However, she can also lead to the insanity that destroys unconsciously.

Everything implies that nature combines immortality in the cycle of death and birth. Humans cannot avoid that cycle somehow. Nothing can help them not to go through the development era, peaks and crises, bursting and dying. From their perspective, they experienced this element as Mother Nature created life and reclaimed it. (You are born from the earth. You will return to the earth). However, we will know that this energy produces something bigger than all of its parts combined. We can cut a flower into the smallest pieces and observe it under a microscope to find out its components. Even if we put them back together, it still cannot bloom again. We can scoop up water from the river to test it, but we can know what the condensate is. We still will not know the phenomena of the river.

It shows that we find ourselves in a period of great rising energies. We have the ability to convince others through effective assertiveness, an enthusiastic optimism, and a great sense of humor. It implies creativity for artists, writers, musicians or advertising professionals, as well as surprising new ideas for technicians, engineers or designers. She also represents the will to change, renew, develop, and vigor in other career fields.

Women feel feminine is power. They represent the nurturing and lively instinct, it is a pleasure to create a bond with the earth. This may mean pregnancy or a new creation, big plans can come true in business because the Empress supports the ability to multiply and implement new things. Regardless of whether in the field of material, emotional or creative, this card reinforces the need to open up to external influences, to let their energy penetrate, and something will be created from there.

The Empress Thoth Tarot represents change and new events. The change can mean something extra to the family, as well as any other form of change in the relationship. She also represents energetic developments, mostly positive, or we are facing her dark side, relying entirely on new foundations for emotions. Even when the first soul needs to go through fire until all the old masks are burned and destroyed. Suddenly, we are in a position to build a new emotional base (based on the experiences) and enter into the spiritual relationship that brings vitality and transformation in it.

The Creativity Osho Zen Tarot is started from the alchemy of water and fire below to the goddess of light above, the character in this card is clearly the creator of creative energy. In fact, the experience of creativity is to engage in the mystery.

The Empress – L’Impératrice Tarot, like all cards of the third level, means an explosion without experience. Everything accumulated on the second level exploded in a thunderous way, not knowing where to go. It is a transition from virgin state to creation.