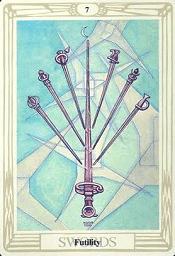 Superfluity – The spirit of uncertainty

I. Analyze and describe the 7 of Swords Thoth Tarot

On the card, we see six swords that the hilts are decorated with symbols of the planets. They directly threatened the largest sword, which was pointing straight up into the sky, supporting the Sun symbol, with a sharp tip of the sword pointing straight up, showing the intrusion of reason. The blade represents sharp intelligence that is capable of dividing and arranging, thereby creating a sequence of clear and coherent actions as possible. The small swords are the unconscious dark side of this power (deception, seduction, cunning, dishonesty, lies and betrayal), these forces, if removed from the big sword, will go against their own goals. Crowley called this “the mismatch between many weak forces and a powerful force”. In fact, this image represents a tendency to love simple but misleading solutions rather than our tough but right solutions. In terms of the whole process, we deceive ourselves and others.

II. Interpretation of the 7 of Swords Thoth Tarot

This card represents our thinking that emotionally, we are basically defeated; this is the inability of reason in terms of the unconscious self-defense mechanism of the soul and self-sympathy (the Moon in Aquarius). If someone becomes a slave to this emotion and keeps focusing on goals and resolutely refusing obvious facts, it will eventually get nothing. However, if anyone can be reluctant to accept to some extent that frustration as a necessary consequence of this card, will reinforce courage, intellect, cleverness and quick response with the surrounding environment, as well as having an advantage with amazing plans.

This card demonstrates that we are unwilling to believe in certain concepts and shrink before conflicts. In that situation, it is very likely that we are trying to prevail over others or “trick” them; however, usually, we turn the lack of trust in ourselves, prevent introspection or turn them into crude lies.

This card means that we are in danger of being deceived and seduce, or we try to do our own business and gain the advantage with dishonesty, tricks, wickedness and controversial tricks that dominate or in other words, this card shows the appropriate and clever application of wisdom, sensitivity, intrigue, and techniques, which are sometimes necessary to achieve a certain purpose.

This card covers the scope of the deceitful attraction to the passive attitude of a victim, from low-level cowardice, for example, a mood of joy filled with malice and dishonesty to rude lies and offensive fraud. It can also be a warning sign that instead of solving face-to-face problems, we go on dealing with trivial matters, and therefore, we may get lost from our selected path.

III. Similar correlations of the 7 of Swords Thoth Tarot

Central sword = Know what you want; it has a sun on the hilt, so this is the sword that represents “our center”. In astrological terms, the sun falls into Aquarius, thus weakening our power.

Surrounding Swords = the reasons you are telling yourself as to why you cannot have it.

The hilts of these smaller swords also have planetary symbols on them and in this card, we will have to attribute the more challenging aspects of the planets and they are not sitting favorably here.

Mercury = (Second right) poor communication within yourself and between others

Mars = (first left) lack of energy/fight to get around obstacles

Jupiter =  (first right) Luck and life is not on my side negative self-talk. Not in touch with the higher self.

Venus = (second left) do not love myself enough, feeling unloved.

Saturn = (third right) too rigid in thinking, little flexibility or persistence to get around the problem in hand.

Background = Light blue, cold look. It is impossible to let the warmth and strength of our character shine.

V. 7 of Swords Thoth card in the upright and reverse

Many times, self-doubt at the moment seems to be difficult to overcome.

The mind seems to be distracted at a time when you need to concentrate.

Associated Major Arcana card is “the Chariot” which is to do with movement and change. So, we need to use this as a motivation to stay away from negative thoughts about 7 swords and release destructive patterns in our minds.

Chaos mental thoughts prevail in meditation, and we lack silence to let go of the mind and worries. We are distracted, so we must be aware of this happening and try to change things in life that are not working. Perhaps, we are even compromising the desire to meditate (the central sword) due to the influence of other parts of our lives (6 swords around). We gave up trying and losing the will to stand up for what we really wanted to do.

Being in an attempt to relieve mental stress we are feeling. Appeasing others too easily.