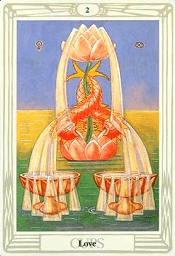 Love – The water flow of attraction

I. Analyze and describe 2 of Cups Thoth Tarot

The picture on the card depicts two holy cups filled with water in the foreground. In contrast to Ace of Cups, they are not supplied with water from the inside but from the outside; The first source of water (Chokmah) is the scalar flow of the original energy (Kether).

The unconscious love expressed with the unimpeded state of Ace has now changed: the stream of water poured into two cups from the “water-splitting” lotus flower from which a lotus blooms in a higher position and is surrounded by two dolphins (Crowley claims they are dolphins though they look more like carps in the picture).

Dolphins represent many things. However, in this card, its love symbol is in the foreground. Even the Egyptians considered it an Isis animal, and the Greeks attached it to their Goddess Aphrodite because, in Greek, the word “delphis” (dolphin) and “delphys” (heart) have the same pronunciation.

This card is the division of the original water that has not been formed yet by the Ace of Cups Thoth card. In terms of emotions (Cups), this is the attraction between men and women. The bisexual soul (Ace) has divided itself in the outside world and both parts are trying to get along. This is why the attraction of pleasure is not only sexual instincts but also the origin of mental instincts, as it includes the search for lost parts.

We understand – in accordance with the above – that the basic alchemy principle of “dissolving and combining” is the basic prerequisite of each higher development step. In the process, the card emphasizes the combination. It shows that we care about the thought of love and harmony. In being physically close to the one you love, unconscious desires are linked to the conscious soul’s love and the eternal flows that merge with the partner.

The night star (Venus) grows in the Moon’s sign (Cancer), and both of them support the power of love with their light. The card represents stages of love and flirting but also often refers to a new and lovely partner that suddenly appears in our lives.

Left Dolphin – has a yellow eye which symbolizes the Sun. Its fin comes to 5 points, the 5 representing the masculine force contained in the Emperor Thoth card.

Right Dolphin – has a silver eye which symbolizes the Moon and its fin comes to 4 points, the 4 points representing the feminine force contained in the Empress.

Thus, there is an alchemical balance in the card as well, and it indicates a harmonious balance between masculine and feminine.

The lotus nourishes itself through the dolphins – access to love, especially universal love provides great nourishment for the soul.

10 Streams – emanating from the 2 lower cups indicating 10th Sephiroth Malkuth. Things are coming into manifestation for whoever draws this card.

Blue sky – love that is clear of negativity and distractions.

V. 2 of Cups Thoth card in the upright and reverse

Can reach universal love in meditation.

A love that is both special and equal. We can both express and receive love equally.

If you ask about our meditation, it reminds us that we have a connection with the inner spirit and its main quality is universal love. Enlightenment is a complete saturation in love.

Disharmony in relationships or close friendships

Meditation is ‘stale’, cannot tune in to the universal love of spirit.