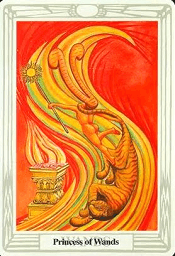 Analyze and describe the Princess of Wands Thoth Tarot

The image of the woman on the card portrays the passion of fire as a manifestation of the rushing and youthful love. She was completely naked and danced in wavy flames which its form reminded of Yod. The fire symbolizes the outbursts of men’s hearts, and her nudity is the embodiment of sexual desire. Her sincerity, though, still had conflicts; wherever she went, she also destabilized, causing people to pay attention and provoking a chaotic passion without having an emotional commitment.

Her oversized hat (Crowley talked about “justice feathers fluttering like flames emanating from her eyebrows”) symbolizes internal contradictions: the inability to the real exchange hidden behind intense sexual desire. This is reflected in the image of a passionate and soft tiger like a cat, as well as a separation of instinctive tendencies from emotional life.

In psychology, she is the embodiment of the principle of sexual pleasure: the spontaneous and innocent motivation that paves the way for instinctive tendencies without caring about emotions. She is greedy and careless in choosing ways to achieve her will; this requires a skilled partner. She was adept at igniting emotions and surrounding it with intense enthusiasm, at least, until a new love appeared so that old love will be quickly removed.

Her type of emotional development is similar to the tension of the temperature curve. She was an enthusiastic priest blowing up the fire on the golden altar of sexual desire (sheep head) and despite the energy burning with a wand of sun.

In this erratic woman, we encounter a fire that is unstable, uncontrollable, introverted or light of inner emotions that are devastating, difficult to detect and uncontrollable. She is the symbol of the beautiful Helen, daughter of Zeus – the God of Greek mythology, and is Leda – Menelaus’s wife, kidnapped by Paris, causing the Trojan war. Her charismatic beauty combined with eroticism like a magnet makes anyone falls in love.

However, she also expressed many things other than feminine attractiveness; she is the embodiment of the hypnotic power of feminine instincts related to intrinsic inability and unable to have a true attachment. Helen is the minimalist human image of the model Goddess Aphrodite, acting from provocative looks without commitment – but only for the purpose of undying burning flames. (*)

II. Interpretation of the Princess of Wands Thoth Tarot

The card is the embodiment of a passionate young girl who wants to be seen and looks gorgeous, even if she is hurt or unstable inside. She represents the exciting and passionate part of the earth that expresses itself through dance and movement. It is the image within us, overwhelmed by the desire for free love, to give up ourselves to instinctive trends. She symbolizes impartiality, love for life, love for sex, independence and innocence, as well as for impartiality that sometimes brings a feeling of inattention.

2. Overview of the Princess of Wands Thoth Tarot

This card represents the initial impulse that motivates something to function: without it, nothing can happen; with it, there is a time of creative change, a new eager start, striving to have fun. However, it may be characterized by irresponsibility.

The daughter of fire corresponds to the fire in the initial period of outbursts and impatience. That is why this card is the messenger of a new beginning and represents the creative power of the invisible will, before being condensed into a specific intention. Therefore, it does not show a strong expectation about anything in particular.

The field of career is dominated by dissatisfaction with vague conditions, which will change sooner or later. The changing aspect of this card, firstly, is a strong stir from the inner to bring new ideas into reality and from that, affects something; however, around us, there are often too many ideas coming at once.

Princess of Wands Thoth card often expresses temptation and invitation to adventure. This includes the lively and rich aspect of an existing relationship, as well as the attraction of entering a new and interesting relationship that everything grows faster than the speed that Emily Post (the American author that specializes in communication etiquette – ND) imagines.

III. Similar correlations of the Princess of Wands Thoth Tarot

[*] Crowley wrote: “Princess represents a multitude of instinctual people that we can recognize by the lack of every sense of responsibility, that ethical standards almost tear each other apart”.

Card 1: Central Theme of the Spread – It implies a time to be brave and the need to express yourself completely without fears holding you back.

Card 2: Crossing Influences – Being reckless and not taking care of yourself/fear of expressing yourself.

Card 3: Subconscious Influences – Being unable to deal with the fear that is pulling you down.

Card 4: Recent Past Affecting the Situation – Being too reckless when not thinking everything and plunge into many exciting adventures.

Card 5: Hopes and Goals – Being more ambitious and impulsive/going with the flow of your life.

Card 6: Immediate Future – There is a need to cultivate the mind and think carefully before acting.

Card 7: How you are affecting your situation – confident, love freedom, non-conformist, seeks justice.

Card 8: How others are affecting your situation – Being with someone/attracted to someone who is extrovert, lovable, fearless, and confident.

Card 9: Guidance or Warning – The need to overcome fears in order to break out of where you feel you are now.

Card 10: Overall outcome – Overcoming fears to connect with your inner confidence and to be able to fully express and realize your ambitions/desires.