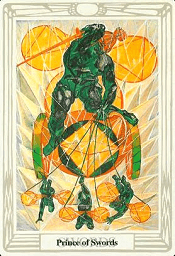 The son of a knight’s movement

I. Analyze and describe the Prince of Swords Thoth Tarot

In this card, we encounter a chaotic power of the principle of thinking, which contains arbitrary and unstable elements, they often change goals without a clear stance. The instability of this spirit (Air aspect of the Air element) is expressed through the chariot. In front of the chariot, there is a pair of pyramids, a geometric pattern representing the analytical capacity and so, it is a symbol of the left hemisphere (logical thinking).

The prince, however, could not keep his thoughts in a direction with a fixed goal; this is shown by the pattern of wings pulling the chariot but not tied by chains. Instead, they tumble in all directions. He jumped from one place to another without knowing what he really wanted just a minute ago. This card simultaneously demonstrates the wisdom that has reached a new model (entering the Aquarius period). The theory of decaying architectures (mechanism of the process and a series of obvious chaos), which gave biochemist Ilya Prigogine the Nobel Prize, is one of the most important discoveries of modern science. He wrote:

The whole world is an unbalanced system. A flow if linking its power to another flow can become strong enough to re-establish the whole system. The path it chooses in this unstable condition is difficult to predict, so it may be very creative. Then, all the previously defined rules will collapse. This is “solve et coagula” (dissolving and binding) of alchemy.

In myths, this type of person is represented by the spring Gods as an eternal youth, who saves mankind and finds a way out of suffering. He is a genius and a holy spirit. However, his fate is always to die young, perhaps, to help him to experience the joy of being handed down the names for posterity, similarly, He also depends on the aging process and his message is increasingly unconvincing when he goes through a period of suffering. This card represents a childish personality, the person who thinks he knows everything and brags about his great solutions – sounds interesting but when applied to reality, it fails. Crowley wrote:

Implementing his mental deduction process has reduced the Air element, which is an important factor to enrich geometric motifs, but he has no real plan; they are statements about the power of the mind but do not identify the goal. In his right hand, he raises a sword, showing creativity, in his left hand is a scythe, eliminating everything he has just created.

II. Interpretation of the Prince of Swords Thoth Tarot

This card represents a young man with a sharp mind, quick, capable of moving forward and upholding his arguments, appropriately and skillfully to support any doctrine. Keeping a neutral attitude with an opposite argument just two minutes ago, it cannot be denied because each argument has a positive side, like any other argument, ready to move toward harmony with the nearest element. (Crowley).

2. Overview of the Prince of Swords Thoth Tarot

The person who “always travels everywhere”, is a young man in everyone’s thoughts that his arrogance is no longer a disease, but a normal crazy state. He had to face the problems of aggression, exploitation, the rational thinking of males in disguised form like a clown. While the technical process he presents may provide some measure of serious clarity and awareness, he also represents negative perceptions. Regardless of whether it is a stonyhearted technician, a critic, a detective, or someone who claims that he knows everything, he is always the victim of his destructive emotions. Despite this, he always serves noble goals because with the consequences he causes, he always evacuates people from the devastated place and lets them migrate to new places; the movement created in this manner will not last long and is not a prerequisite for development and access to new emotions.

In the process of cognitive development, this card shows the brilliant period when we become enthusiastically seeking solutions in theory and therefore, build castles on the sand. When the trend is to pursue the goal with a cheerful demeanor, our skill will be further refined because then the necessary insight will be revealed. However, if one thinks that all opinions and perceptions gained during this period are excellent, he will soon regret this lack of responsibility.

In the field of careers, the card shows that we are in a situation where decisions need to be made quickly. This card also warns us to take note so as not to fall into deceitful situations. It shows that our plans and concepts often sound very impressive but useless, and we will be advised to thoroughly examine and reduce expectations about these solutions in order to suit reality.

Hidden inside this “talkative” is the desire to have personal freedom. To meet this requirement, the relationship needs to be corrected and improved throughout this time. People often say “rules” need to be discussed again. We can be sure that the Prince of Air can blow a cool breeze into our gloomy relationship. However, we must note that the solutions he offers are only theoretical. It will not work in practice and often cause painful wounds by ignoring important things (usually emotions).

III. Similar correlations of the Prince of Sword Thoth Tarot

IV. Prince of Swords Thoth card in the upright and reverse

A highly educated person with highly developed intelligence. A person who likes to think, ask questions and philosophize.

Being good at creating ideas quickly but moving on from them without developing them. His intellect can make people who do not respond to the intellectualist conversations at the speed at which he communicates exhausted.

Independent, private, difficult to get used to, may lack emotion, warmth, and empathy.

It is possible to point out the need to slow down and analyze our thoughts more often to see if we can achieve something practical from them.

Being unable to use your natural creativity the way you want.

Going through negative events in your mind from the past and unable to move forward.

Trying to move forward but our thoughts are too scattered at the moment.

Card 1: Central Theme of the Spread – unable to see the clear path ahead, having trouble knowing where your life is heading.

Card 2: Crossing Influences – the mind is stuck in the past, self-talk is negative.

Card 3: Subconscious Influences – lack of confidence due to past hurts.

Card 4: Recent Past Affecting the Situation – goals have not worked out.

Card 5: Hopes and Goals – to be more clear about the future and can follow your goals.

Card 6: Immediate Future – a mix of ideas, we need to read up on what is important and make a plan.

Card 7: How you are affecting your situation – smart, sometimes stuck in past frustrations but always kept optimistic about the future.

Card 8: How others are affecting your situation – be with a very intellectual person, but lack of empathy and warmth.

Card 9: Guidance or Warning – should be connected with your heart as well as your mind, learn how to be patient when aiming at life goals.

Card 10: Overall outcome – You may be confused about the orientation of your life with many good ideas but less achieved; need to draw some other cards or “deep cards” to get more information about the road ahead.